Camper of the Century

Okay, going to type this up REAL QUICK. Am super busy. Have to get back to the important business of forgetting to pack someone's underwear.

I can't believe I forgot to mention this earlier, but. Ezra. Mini Football Camp. You know, like regular Football Camp, only more wee.

And a lot more sassy. 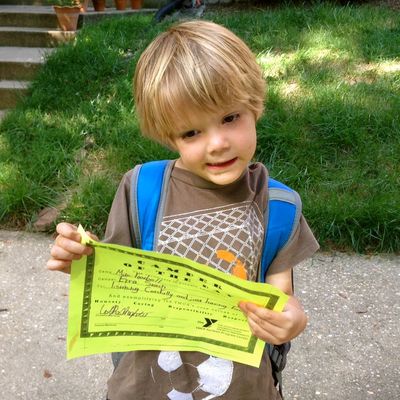 This was his choice, OBVIOUSLY: We sat both boys down with the YMCA catalog and read off the options. Ezra chose swim camp, Superhero camp (?!), something called "Sports Festival" and finally...football.

(Noah chose swim camp twice and Lego Robotics once, which was a DISASTER that I still don't even want to talk about. Still not a fan of the structured activities, that one, even if they are literally built out of goddamn Legos. Anyway, he quit one week in and transferred to gymnastics, hated that one too and we all basically spent a week dropping him off anyway and saying nonsenscial shit like, "I don't CARE if you don't have fun but you will at least TRY to have fun." Parenting win, all around.)

Just like our experience at Build-a-Bear, Ezra got completely, over-the-moon ecstactic at the mere mention of football, EVEN THOUGH I STILL DON'T THINK HE KNOWS WHAT FOOTBALL IS. We never watch it on TV, we don't know any kids who play it, but no matter. Football appears to be in this child's (peanut-sized, small-boned) DNA. SPECIAL TEAMS, KIDDO, WOOT.

So since he was completely unfamiliar with the actual mechanics of football, he came home slightly horrified on Monday after playing it for the first time. Some other kid TOOK HIS FLAG. Like, OFF HIS BODY. Like, the NERVE.

He apparently refused to play the next day; the insult cut him just that deep. 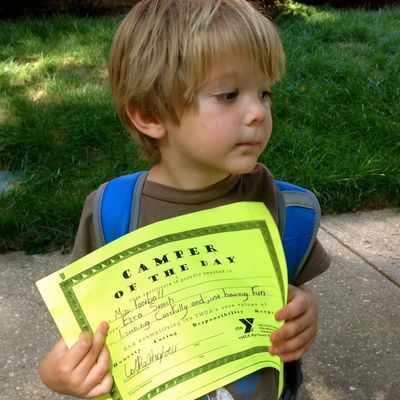 By yesterday, however, he rebounded enough to win "Camper of the Day." Technically it's for "Listening Carefully and Just Having Fun" and "Exemplifying the YMCA's Core Values" but between you, me and the camp director, it's because Ezra is just...well, really super-duper cute and hilarious and all the counselors wanted him in their camps all summer.

Especially on the days when he arrived wearing a Superman cape, which was probably 97% of the time. I asked Ezra if he would like to make an acceptance speech for his major award and he said yes. I transcribed it here for you, unedited.

(Please note that, despite "honesty" being one the YMCA's core values, EVERY WORD OF THE FOLLOWING IS A LIE.)

"I lost a tooth at football camp! I lost it in the toilet and then I flushed it down and it went to the ocean. I will need to fish it out at the beach with a fishing stick and then I will put it back into my mouth with toothpaste. Okay that's it. Can I have a snack?"

I shouldn't have favorites, but that kid breaks my heart with love.

I absolutely adore the Storchiness of these boys. And. The lie. So cute.

Before you clarified what his major award was for, I could have sworn it read "Touching cordially and just having fun."

Good God, I want his hair. I mean, just look at it. I spend approximately 87 billion dollars a year for highlights and I'm mucho jealous of being outprettied by your preschooler.

Sigh. Oh, Ezra. Your life is just so full of win.

So you're saying it's entirely a coincidence that he appears to be flipping off the camera in the second picture?

Also, if I send my kids to YMCA camps, will they say awesomely cute things too?

Of course that is what toothPASTE is for! For gluing teeth back in! Why didn't I ever realize that before?

Ezra has to be a football player just so he gets an opportunity to talk to the press after games. He cracks me up. My older son was like this with basketball - he totally loves it, even though we've never watched it or played it with him or encouraged him in any way.

Love that son of yours. He's a keeper and the Superman cape sends him over the top of the cool-kid charts.

I hope we get a Camper of the Day degree in Netherlands! Good initiative! Good luck with your cute son

He's just so damn cute - too cute for everyone!

Ok - I'm feeling really silly for posting a comment here on a post about Ezra when what I really have to say has so much to do with Noah, but the comments are all closed - and yes, I know why. I know why because I have just finished a week-long adventure reading the entire SPD labeled archives of this blog.

Last Monday was a killer of an afternoon. In retrospect it all makes total sense. The previous Friday had been my son, Little G's, last day of camp for the summer and Monday marked the first day of no real plan. And you would think that 8 months into this SPD diagnosis I would have figured out to accommodate for such a major transition...but I didn't. And the day sucked. Nothing was right, everything was wrong, the tantrums, the yelling, the panicking over every. little. thing. It was exhausting for him and mentally incapacitating to me. And then, just when I thought it couldn't get worse, my husband came home and things just got insane.

So my husband sent me up to our room to cool off and while I was up there I caved to my own anxieties and googled, "please tell me my sensory kid isn't going to be an axe murderer" And guess what? The post about the petting zoo at the birthday party from way back when came up. And I read it. And I immediately identified with it. And I wanted to write to you right away because I was so thankful that I had found someone who could relate, even just the tiniest of bits, about our kids who seem so much alike in all of their odd bits and pieces of a bazillion different labels. And then I realized two things: 1) our sensory kids are actually 3-4 years apart in age and 2) you're kind-of like a big deal on the internet. I mean, reaching out to you would be a little bit like trying to tell Drew Barrymore how much I think we are truly alike and should be BFFs forever and how she should totally play me in the movie of my life because we are so. much. alike (even though I'm roughly 10" taller than her). In other words: probably unreachable (without trying to get through a bazillion handlers and rabid fans first).

So anyway, back to my point. I read the entire SPD archives because every single post meant so much to me. I identified with each one so well. From the original diagnosis (though my son's speech isn't delayed in the tradition sense but rather he suffers from an inability to access his language when he is in fight or flight mode) to the strange rigidity around all the things - not being able to take a different route out of your complex, not being allowed to call things by different names or, God forbid, improvise on the spot - from the food texture aversions and dwindling list of approved items to the stares and 'helpful' comments from strangers; from the neuro-typical and remarkably (for lack of better term) easy second child all the way up to the interaction with Mr Rogers... no really...I found Mr Rogers on Amazon Prime about 6 months ago and thought for sure Little G would never go for it and instead, he sat there quietly and actually talked TO Mr. Rogers:

"Do you ever feel upset because you didn't get something you wanted?" "Yes, Mr. Rogers," he quietly answers completely rapt, eyes focused on the screen.

At the risk of sounding like a lunatic, you are my first. Anne Lamotte talks about surrounding ourselves with our tribes and as I read your post about finding your tribe (because yes, I also read all of your CafeMom posts too) I realized you are it. Yes, I have mommy friends. And I absolutely have the most amazing support from my non-mommy friends, not to mention my husband and our family, who are far in miles but close in spirit. But you are the very first person who I have ever come across who has experienced the same exact things I have been going through the past four years. For a long time I allowed myself to think that I was doing it wrong; that I couldn't handle motherhood. Several things have allowed me to move past that negative place - not the least of which is having a second child who, as you once put it, challenges you in the way you EXPECTED to be challenged as a parent - but after having allotted WAY too much TV-after-the-kids-are-in-bed-time to all of this reading, I can honestly say that your story; Noah's story; has brought me to a place that I never imagined I would find: a place of peace and rest.

You, Amalah, are my tribe mate.