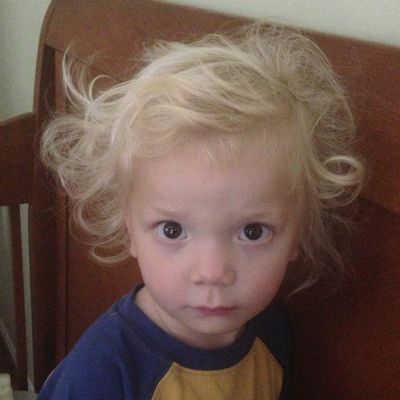 Ike is many many things. Ike is very cute, very funny, very smart, very passionate about getting the specific kind of liquid he requested in a very specific cup. (I mean, the boy asked for mulk in a plain red cup and you tried to give him joos in a Go Diego Go cup. You sir, do not deserve your nice eardrums, and shall be punished accordingly.) 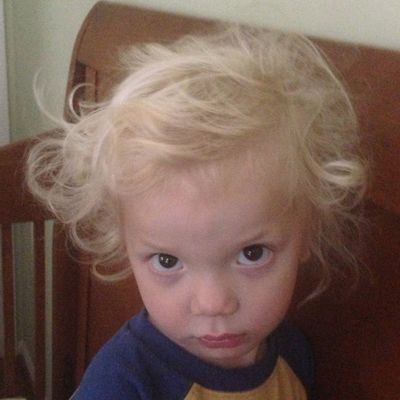 Ike is NOT, however, a performing monkey, and lately seems to get real and actual delight from thwarting my attempts to document the cute/funny/smart things he says and does. Oh, he'll indulge me off-camera endlessly — say this, say that, count your shoes, do that weird forehead-to-the-floor-butt-to-the-sky breakdancing move again — but then the second my fingers inch towards the record button he's all, IKE'S OUT, BITCHES.

His next birthday montage will be heavy on shots of him hollering NO at me before running out of the room. The good news is that I can probably recycle the footage when he's a teenager. 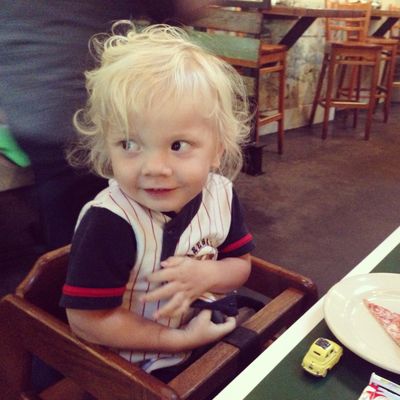 (And then I will pull these photos out...

...and make the "MAGIC IKE!" joke for the millionth time and send him running out of the room yet again, because GOD MOM STOP NOBODY REMEMBERS THAT MOVIE ANYMORE.)

Anyway, you can imagine my delight when not only did I get him to stay in frame for an entire minute, I also managed to capture a brand new word, one we've been waiting for awhile now.

And...yeah. That's all I've got, really. Plus it's almost noon so I have to go get him from school, and lord knows I won't be able to add anything else to this entry because I will be too busy KISSING HIS FACE OFF.

The picture of him ripping his shirt off killed me dead. I'm dead now. Magic Ike!

Noah will forever be my favorite Child of a Blogger, but...

...oh mah gerssshhh, that photo of Ike ripping open his shirt is likely the funniest thing I've ever seen on the Innerwebs, ever, for all time. I laughed so hard that my abdomen hurt.

THE HAIR! Everyone loves the hair, but it is really Killing me today......THE HAIR! Plus so blonde with brown eyes, not so common!

Ike and dun dun dun duuuuuuuuuuun MAMA! My day = made dammit. And if he ain't a mini Dr. Emmett Brown, his name's not Ike. Ike. Iiiiiike.

Of those two photos it's the first that kills me. He's just too cute!

Oh, he is soooo sweet! And the forehead on the floor, butt in the air breakdance move must be a universal amazing toddler feat. "OMG guys, look what I can do." :)

I anticipate many tears the day the dreaded "had to cut the hair" post goes up. He is a doll!

Mine's just a few months behind, and I've been trying in vain to capture her (close...ish) rendition of the ABC song.

They're made this cute to balance out the wrong-cup moments.

My crazy, curly (red) haired toddler is just a little younger than Ike, I believe. She turned two in July. She does the same thing. She's being totally adorable until she sees the camera. I rarely get a smile and usually she has bolted from the room screaming... She's also my third so I'm anticipating the "why aren't there more pictures of me as a little kid?!" My other two were total hams for the camera!

OH. OH MY. Sooooo cute, I can't even handle it. Ours is about a year and a half, and has kind of a tough name to say, but I can't wait until he can. So sweet. And mine only says "Mama" in the morning or when he wakes up from a nap. Then he yells it as loud as he can. But refuses to say it any other time. EVER. Toddlers.

Aww... He's just so cute. I have an Alasdair who calls himself Ada, and who also totally refuses to smile for the camera anymore. Unless we're sending a selfie to my Husband (who works offfshore) where he totally hams it up. Won't smile but LOTS of shots of his tongue out. 2yr old's are ridiculous creatures. Huge fun though.

There's the trick! If he can see both Maamaa and Ayckkk in the shot!

Adorable beyond words. Not to mention his t-shirt. Fair dinkum!

I first watched this video with my 19-month-old sitting on my lap. Now all he wants to do is watch "Baby Ack." Apparently Ike is now his virtual BFF.

OMGz. That HAIR and those EYES. Uggh. He's an awesome little dude.

Oh my goodness, how gorgeous is this baby!

And his hair is so Austin (from PR, you know). I love it!

Haha, you realize this beautiful child looks exactly like you, right??? He's a doll!!

He is unbelievably precious! My 2-year-old will point at you and very clearly say, "I am NOT your monkey!" She does not like to perform. But in saying that with such gusto, she is kind of performing, so that's awesome :) And I think Ike and my daughter have the same hair. Is it a rat's nest every morning in the back? I'm guessing yes...