Return of the Petting Zoo 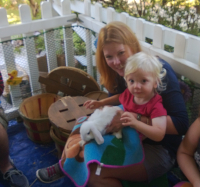 We attended a birthday party yesterday. The invitation said the party would include a petting zoo. I saw that and had a moment of hesitation, then thought, nah, what are the odds? Three and a half years later, that fucking petting zoo incident still burns a quiet, burny burn in my chest. I don't like thinking about it. I can't even bring myself to re-read the entry about it. Hell, just typing "petting zoo" into the search bar over there gave me a weird, shaky feeling. Sort of like the feeling I got yesterday, seeing that very same petting zoo handler pull into the driveway. I wanted to leave. No, I wanted to flee. I heard some ducks frantically flapping their wings from inside their carrier and felt exactly the same way. "Should we go? I want go. How do we just...go?" I whispered frantically to Jason, who of course was like, duh, we leave after the cake, calm down, it'll be fine. Birthday party PTSD. Apparently it's a thing. He didn't remember or recoginize me or Noah, this stranger whom I've let loom so large in my mind for all these years, whose one cantankerous sentence sent me spiraling... Read more → 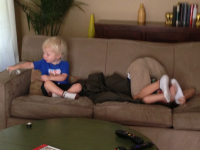 As I mentioned in yesterday's bloggy installment of fail, Ike's preschool ends at noon. (Technically it's a pre-preschool; a toddler program for 2-year-olds. Mini Montessori, with smaller chairs and bonus potty training.) And yet by the time I arrive at 11:59, Ike is almost always the very last child to be picked up. It was the same deal last year, too. WHAT GIVES, other parents? Why you gotta be so over-achieving and stuff? I get the whole missing your baybeeee thing but dammit, the school day is three measly hours long and I paid for every last one of those 180 minutes. And Imma use every last one of those minutes. But then I get there well within the confines of my paid-for minutes and Ike's sitting there all Forever Alone In My Principles. Anyway. Stop making me look bad, is all. Let's all collectively embrace the lazy, as a united group. *** But hey! Since everyone is now back at school and I have entire luxurious hours to sit around being drunk and stuff, I will once again be writing Advice Smackdowns at AlphaMom twice a week, on Mondays and Fridays. Yay! And huzzah! So if you've been hesitant... Read more →

My Organizational Skillz, Let Me Sh-OOH LOOK SOMETHING SHINY 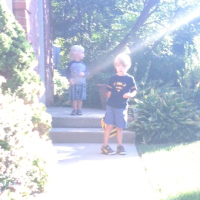 So Ezra's (ZAH! ZAH!) first day of school went very well, provided you don't bring up the part where I forgot to go get him at the end of the day. Oh, you're gonna bring up that part? FINE. You're a bitch, though. Figure 1: Glorious light-filled angel babies who deserve better Noah's bus arrives around 3:25/3:30. But it arrives maaaybe a block away, just around the corner, over there-ish. *points over shoulder at office window just to really clear it up for the folks reading at home* Thus, "picking Noah up" usually goes something like this: 1) La la la worky work work work type type 2) OH SHIT LOOK AT THE TIME 3) Dash downstairs and out door 4) OPTIONAL BONUS ROUND: Put on shoes, be showered, vaguely presentable, etc. 5) Be at least down to the corner by the time the bus is pulling up to the stop, so Noah can see me and be secure in the fact that his mother loves him and cares enough be in the general vicinity of his bus and would never, ever just completely forget our daily homecoming ritual. Ezra's new extended school day ends at 3:00, but there is... Read more →

Oh, Ezra. Never stop being so you. Today is Ezra's first day of school — he turns five next month, too late for Kindergarten Proper, so he's got one more year of Montessori pre-K to power through, like a boss. He's going all day this year, however, which means he gets to take a lunchbox filled with actual, non-plastic/Lego lunch items. Today I packed him a sandwich, raisins and cucumber slices. He's super excited about the cucumber. He packed his Camper of the Day certificate and a disposable waterproof camera he found in the basement. You know, I don't even ask anymore. And yes, he's wearing a cape. Of course, he's wearing a cape. In somewhat related news, Ike is trying VERY HARD to say Ezra's name. (He's called him "brother" until recently, or more accurately: BWA-VA.) He still doesn't have the "r" sound yet, so it sounds more like ZAH-ZAH. Needless to say, I approve. Mightily. Read more →