I have written (many, many times) already about my love/hate relationship with the zoo. Here's the Tl;dr summary...

THINGS I LOVE ABOUT GOING TO THE ZOO:

THINGS I HATE ABOUT GOING TO THE ZOO:

But today I am happy to report that I have done it. I have SOLVED THE ZOO. 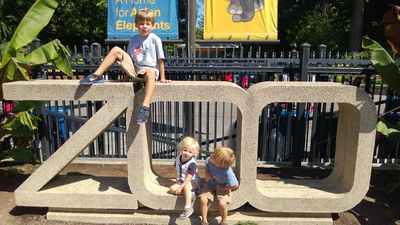 I solved the zoo by not actually going to the zoo, but instead getting my hair cut (and various patches of body hair forcibly yanked out, because TREAT YO SELF) while my crazy husband took our children to the zoo.

All three of them.

By himself, alone, with just his two measly arms and two puny eyeballs.

I dunno. He just woke up Saturday morning and decided to take them to the zoo. He took our double stroller, some bug spray, two diapers, half a package of baby wipes, one sippy cup and three baggies of Goldfish.

He said he took them because he needed to prove to himself that he COULD take them.

(Similar to the time he texted me a picture of Noah, Ezra and six-week-old Baby Ike at a restaurant while I was at BlogHer, with the added note that they'd just gone to see a movie in the movie theater. I believe that was the fatherly equivalent to ripping off his shirt and beating his chest in public.)

It just feels like an anxiety dream waiting to happen: Someone will misbehave or run away. Someone else will throw a tantrum or have a massive diaper blow-out and oh my God, I've forgotten to pack the wipes and where's your brother? No, I mean where's your other brother?

And all it takes is ONE of those things actually happening to convince me that my fears are justified, that my children really are a pack of feral, slippery eels who can not and should not be taken anywhere without at least two adult chaperones. (Ask me about the time I lost a toddler at Toys R Us! Or the time I had to wash a butt in the sink of a crowded public restoom! Or the time that shall forever be known simply as "the parking lot incident.")

But there Jason was: one dude, three kids and a zoo.

Everyone behaved, save for some whining/disagreement over the order of exhibit visiting (Noah wanted snakes; Ezra wanted PANDAS PANDAS PANDAS), and you can't take strollers into some of the buildings (which GAH SYMPATHY HIVES). It was fine, kids had fun and we met up for pizza and ping pong afterwards. And while we both hate that whole thing people do when they see dads out with their children ("Babysitting the kids today, huh? Giving poor mom a break, huh?")...fuck it. I was really proud of him.

Not proud enough to aim for the same level of ambition yesterday, however, when Jason announced that yeah...you know what? He was gonna go fishing.

My turn. And as tempting as it sounded to just stay at home all day...he took them to the zoo. I couldn't let him show me up like that, making me — professional mommyblogger-type person — look all incompetent and stuff. Are you calling me chicken? Because bawk bawk ROAR.

First, we went out for pancakes. There were balloon animals. 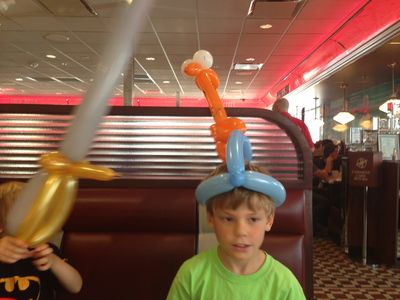 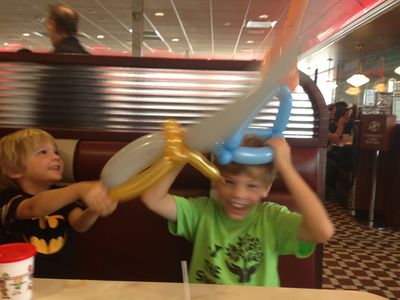 ...which was a FABULOUS combination, particularly in such close vicinity to water glasses and lots of maple syrup. 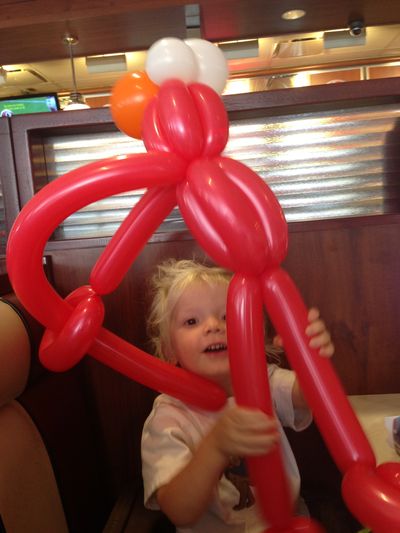 Ike got a giant...Elmo-type thing. 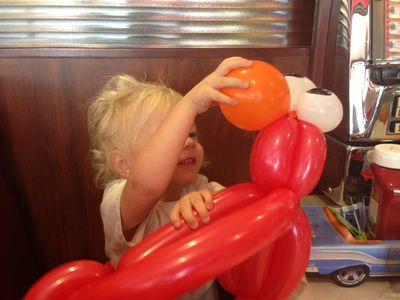 (Which is currently far less "Elmo" and much more "demented nightmare fuel" now that all the arms and legs popped, leaving just the head and torso. Ike still loves it, but I am counting the ever-deflating minutes before I can justifiably toss it because I swear it's moving around the house just to constantly stay right in my peripheral OH SHIT WHAT'S THAT THING eyesight.)

Our brunch went so well, sword-fighting aside, that I decided to up the difficulty level and take them all grocery shopping. Jason had offered to stop at the store on his way back from the fishing trip because he knows I consider grocery shopping with the children to be on par with one of Dante's circles of hell. But again...HE took them to the ZOO. Surely I could handle buying some damn milk and broccoli florets.

(If Jason's master plan was to spin three hours of zoo-time into days of me not bitching about having to do things, then...well played, sir. WELL PLAYED.)

Dad took them to the zoo. Mom took them to Trader Joe's. Guess which outing ended with a giant package of peanut butter cups, and therefore won the entire weekend?

Thank you for making me smile.

I took my two-year-old out for a very age-appropriate early dinner on Friday and nearly crumpled in the face of death stares from an older woman nearby. It made me feel bad for even leaving the house. Thank you for your tale of going out with all three boys. Good for you, for all of you. It sounds like you had a great weekend.

As someone who lives in DC, how do you feel about readers recognizing you and saying hello when you are out and about with your family? Creepy? Annoying? Nice?

Thank you for this post! I can take the kids to the grocery store on my own (Trader Joe's, because you're in and out in like 20 minutes) and a few other places, but I haven't taken them to an actual museum or zoo yet because I am convinced I will lose one or both of them. So, WHEW, thanks to you I will take these two out for a good time in a few weeks!

You're blowing my mind- I was at the same restaurant for breakfast yesterday! I know it's the same b/c the weird ballon-animal-making clown scared the crap outta me on my way out. I'm not afraid of clowns in general, but dude looked weird! I am slightly jealous of Ike's Elmo though, too cute!

I could use a few more good Z snaps in my life. Must attempt taking my monsters, I mean, children to the grocery store. :)

Oh whatever. EVERYONE knows that EVERYONE behaves better for dad than they do for mom because MOM. That is all. That being said, I am totally OK with taking my kid to a zoo where he can run around like a rabid hyena if he wants. It's the taking him out to eat that gives me hives. His father, our babysitters, my mother...pretty much everyone else has taken my kid out to eat at proper restaurants. I get nervous going to the crappy diner on our corner for a quick snack.

LOL...my kids school does a kindergarten field trip to the zoo (this one) and let me tell you chaperoning 3 kindergarten boys all day just about did me in. One ran from exhibit to exhibit and never stopped talking, one never said a word all day and wanted to stay at ever exhibit forever and my own kid wanted to run from exhibit to exhibit was a bit fearful of Moms response!

Amy, you are my spirit animal.

This gives me some (still somewhat terrified) hope. We have a 1.5 year old and are on the eve (well, 6 weeks-ish eve) of having our second and I've been seriously considering the prospect of never leaving the house again. I know others do it with ease, but lord, I'm scared to death at the prospect.

Not fair! Balloons *and* peanut butter vs. The Zoo? Poor Jason never had a chance.

So, I hate to do this to you, but... The chocolate covered pretzels at Trader Joes are zomg. Try, if you dare. But it's the head of a dark, chocolate-y wormhole.

I should feel embarrassed, but my girls are 16 and 11 and yesterday when I had to take them to 4 different stores, I may have wanted to turn around and go home. (In my defense: I'm not a shopper...they are.)

We all survived. We even had fun. Mostly.

My husband used to take my three close in age children out and give me some time alone. Everyone fell all over themselves helping that poor man with the kids who was so wonderful. If I took them out, I just had people give me the death glare if they didn't behave perfectly. Although I did lots more with them, they still remember the dad stuff.

Only two diapers? Man, does he love to live on the edge or what?

Reading about your lovely family always puts a smile on my face. Thanks for sharing your life with us!

I must use the term 'demented nightmare fuel' today at pickup. Exceedingly funny.

Nah, two boys and daddy and mummy always together be it the zoo, the restaurant or the grocery. We're not brave enough to guard them alone. Looking at how those balloon animals are behaving, it gets even scarier.

The idea that I may have to take all the children somewhere on my own is the number one con on my "should we have a third baby" list. Especially with my eldest having SPD and PDD-NOS... I think you both deserve a medal!

@NM Come say hi! I love meeting people and readers! I promise I am very friendly and talky and am not even a little bite-y.

I have 3 littles ones too (4, 2, and 10mo) and i force myself to take them places on my own. Not to prove i can, but if i don't i may be hiding in the bathroom/pantry/closet crying/eating all the peanut butter cups cause kids be CRAZY in the house all day!

I like to outsource this kind of activities to family members, like grand-parents or aunts and uncles. They're always so happy to see the kid "without mom and dad being there" and we don'T have to go. My sister-in-law took my daughter apple-picking this week-end, and to an amusement park this summer. My parents took her to the water park and to a hotel this spring. Plus, I'm cheap, so I'm glad I don't have to pay the big bucks!

I loathe Tuesdays, and today is no exception. Your story brightened my day. I love reading about your family!! You really do have a magical way with words. Thanks for sharing.

I just took both mah boys to the doctor, which INCLUDED shots, and then, WALMART. BOOM. Z snaps for this mommah.
Exhaustion now.

Girlfriend. Preschool orientation Monday night, PTA last night, first day of co-op preschool today with all the children and all the newbie parents and I borught snack, immediately followed by mobile lunch and swim lessons. I'd give myself several z snaps but I'm too damn tired.

When I went out of town (for the first time ever since having kids), not only did my husband watch them for 5 days, he took them to a children's museum in ANOTHER CITY. two 3.5 year olds and an 18 month old. Sure, he met my parents there, but STILL. He also took them to the park, and at that time, *I* didn't even take them all to the park by myself. Showoff.

Also I've concluded that things was way easier when it's just one of us. When we're together, we both take the alpha role, and someone is just talking at them all damn day.