It Must Run in the Family

So Ike's costume = A HIT. We attended the school Halloween parties on Friday night and almost everybody "got" who he was.

(And thus, me = smug as hell; drunk with power. And seriously considering buying a red puffer vest for myself, since Jason claims he CAN'T dress up as Marty McFly without shaving his beard and he won't shave his beard just for trick-or-treating because COMMITMENT TO SPARKLE MOTION. HE DOES NOT HAVE IT.)

I managed to coax some pretty impressive volume out of Ike's hair, but I actually think the band-aids are what pushed him solidly out of generic mad scientist territory and into the "wait...is that...omg" realm of pop culture recognition.

Which is good, because this morning, as we were leaving for school, he decided to attempt walking down our front steps outside all by himself. He managed to navigate exactly one step before falling face-first and eating it on the pavement, while I stood there slackjawed behind him, wondering why I thought there could've been any other possible ending to that scenario.

So NOW he actually has a huge red lump on his forehead that actually requires a band-aid. 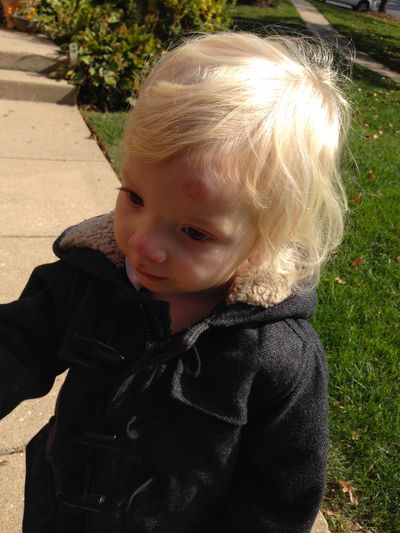 (After naptime I'm going to hand him some crayons see if he draws a flux capacitor. We're going to be rich!)

— known in our house as "My Baby," Ezra's most beloved and fussed-over toy; like every day Ezra leaves me with very specific instructions for My Baby's care and feeding and nap schedule, and then quizzes me after school to make sure that I followed them — came with us to the Halloween parties. 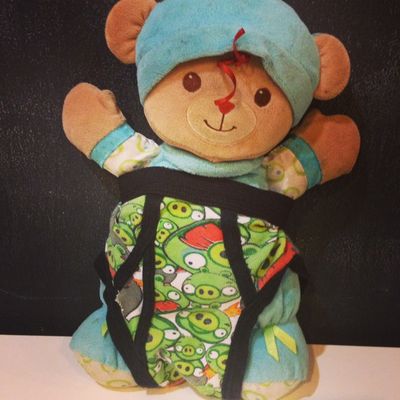 He is dressed as Captain Underpants 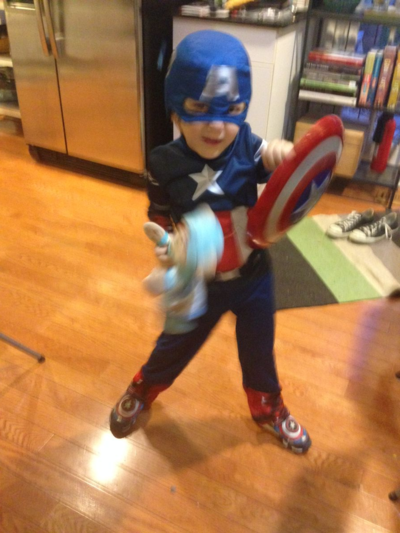 Marvel! Call me! Have an excellent idea for a spin-off franchise.

so awesome! well, except for the falling down the stairs part.

What was Noah? Is it Harry Potter related? I know he has been wearing the glasses.

I would love to see party pictures of all 3 in their costumes! I think Jason could rock the Marty costume, even with a beard.

Wait! Jason could be Marty McFly 20 yrs later! In the future! ( Sorry, too much trick or treat chocolate?)

I love hearing about Noah's triumphs. I adore your Botticelli baby...err toddler, but Ezra? He just cracks me up! Does he still have his wood chip?

I'm hard pressed to think of a cuter Internet story than Ezra's My Baby scheduling and quizzing. Srsly adorbs.

And yes, the Noah Halloween Costume Story! I'm so excited that he picked one out this year! :-)

His forehead looks so real-how do you do that stuff with such aplomb !~! Happy Halloween, Captain Underpants and all the boys, too.

You have GOT to tell us about the care and feeding instructions for My Baby. ;)

We have the exact same bear! With the same intense fire of love! My 3 year old tucks his into his bed every morning, for a "nap" while he is at school. Ezra must trust you more, because I'm told not to touch his baby. Like ever, MOM.

It was the goggles that sold it for me. The bandaids were just extra gravy.

Yes, the goggles and the hair were the tip-off -- the bandaids helped confirm it.

"He's method! Who knew?"
Love this.
I have a method kid too -- he went as Woody the Cowboy one Halloween, and broke his left arm a few days before. The same arm that Woody had broken in Toy Story 2.