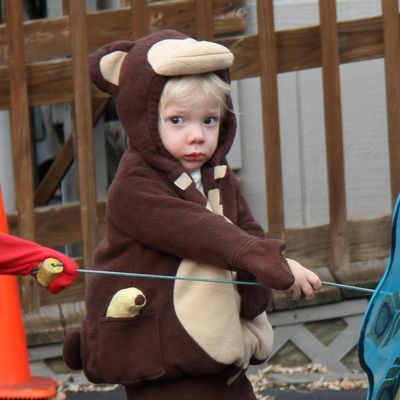 I decided Ike's Doc Brown costume might be a little too high maintenance to send into preschool ("Dear Teachers, Please put band-aids on his forehead and use the attached teasing comb on his hair. I would like to see at least three inches of volume in all directions."), so this morning I raided the hand-me-down costume box and dug out our trusty Old Navy Monkey suit. 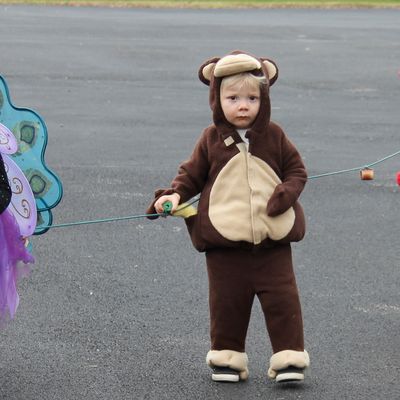 Despite Serious Ike's Serious Face, he actually really likes the costume and refused to take it off once we got home — I believe his expression in these pictures is directed more at the whole "Halloween Parade" business, which was little more than a cluster of costumed toddlers being led around the parking lot by a rope, while three times as many adults shuffled behind them with cameras and phones and a lot of overzealous waving. For the record, no, the "is that a banana in your pocket" joke does NOT ever get old. 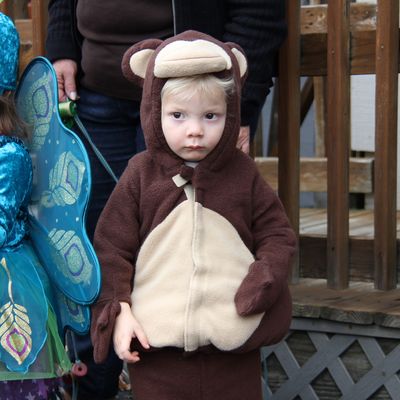 For compare/contrast purposes, here's Noah the Old Navy Monkey and Ezra the Old Navy Monkey. Funny how Noah is the only kid I could ever document SMILING in the monkey suit, given his long and illustrious history of HATE HATE HATE-Y HATING anything and everything costume-like since.

And on that note, now Ike and I have to head to Noah's school for THAT parade, a parade that as of this morning, Noah claimed to want nothing to do with, no, eff this Halloween noise after all. But Noah has an equally illustrious history of suddenly changing his mind at the last minute, which is usually the same minute he is confronted with the presence of cake or candy. So we'll see. He'll be dressed up either as Harry Potter when we get there...or dressed as Just Noah, albeit a Just Noah who has a lightning bolt drawn on his forehead with black eyeliner pencil.

But! The second thing! I promised you two things! I was absolutely delighted and honored to be a guest on the (hilariously funny) One Bad Mother podcast. Even if it meant having to talk on the phone. Which is horrible and terrifying. And thus fitting that I was a guest on the show's Halloween episode, which you can listen to below (or over at the show's website, in case the embed gets borked somehow).

So if you've always wanted the chance to get mildly unnerved by the fact that my actual voice probably sounds nothing like the one you've invented for me in your head, THE FUTURE IS NOW! YAY.

My daughter wore the old navy monkey suit last year! I clipped a flower to her monkey-ear and we called it a girl monkey, because the older one flipped out about cross dressing monkeys

adorbs! The monkey is holding up better than our Cars hangs-from-the-shoulder costume that has zero shape left and is very pathetic. But hey, the 2 year-old was not interested in anything else and hates masks for more than 2 seconds.

I totally thought he was taking part in a tug of war in the first picture.

Your Halloween post of lat year still makes me laugh out loud whenever I think of it!

OMG...your voice sounds EXACTLY like I thought it would. I think that freaks me out more. :)

Also, yay for the return of adorable monkey of disinterest! :)

I did't realize I had a voice for you in my head, but then I heard you and thought "I wasn't far off," so I must have.

Amy, your voice was fine, but that interviewer with the gravelly voice and grating cackle who laughed like a maniac at every comment--eesh, I couldn't listen either.

The monkey costume is cute all around! And your voice is what I expected, so that was a nice surprise :)

Banana in your pocket, you say? That's a real thing: http://www.betabrand.com/custom-cargo-pants.html
You're welcome.

Your voice is exactly as I imagined it and I was so delighted when I listened to One Bad Mother on Thursday and you were the guest!!!! All of my funny moms in one place! I literally let out a squee of joy in my car!

irt the 2 yr old "asshole" question: my childcare provider says "hands and bodies to yourself" a hundred times a day. they of course also don't get to keep the toy.

So I clicked over to see the photos of Noah and Ezra in the monkey suit, and saw the blue monster costume that Noah wore when Ezra was the monkey. My littlest one wore that same costume just this year! I scored it at a thrift shop for $3.50. =)