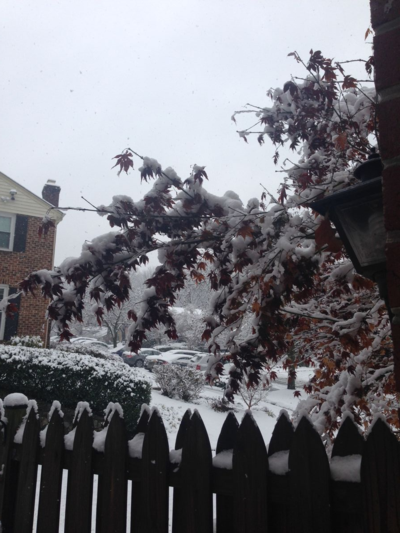 Well, so much for that theory. It's snowing again.

But today my boys have no real interest in playing outside so it's still entirely possible that I wasted a bunch of money on snow pants and boots yet again. And that's what really counts, you know? Ah, traditions.

Speaking of 1) traditions, and 2) seasonal wastes of money, we took the pack for their annual visit to the local Mall Santa. They submitted their requests (Ninja Turtles and MORE LEGOS GOOD MERCIFUL CHRIST) and quizzed the poor man mercilessly about why our Elf on the Shelf

has to go home after Christmas, that's MEAN, Santa, he's OURS, let him STAY.

(Note that Mall Santa did not seem to be familar with the Elf on the Shelf, that creepy stalker toy that I was suckered into a couple years ago and now constantly forget to move at night; and in fact I may or may not have purposely knocked a box of cereal over one morning to distract the boys while I grabbed Elf off the broken wine rack and tossed him into the next room. BAM. DINING ROOM TABLE. THREE POINTS. In other words, do your industry research, Santa.)

And then I spent a somewhat appalling amount of money on a photo of my children looking 1) hilariously dorky, 2) hilariously stoned, and 3) at a point in space somewhat right of the actual camera. 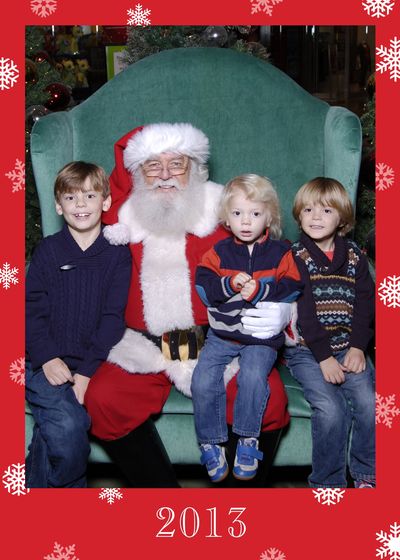 But check out those coordinated sweaters! BAM AGAIN. Photographic proof of me vaguely having some form of shit together. Priceless.

Best. Santa. Photo. Ever.
Motherhood: You nailed that sh*t.

I have pictures of my two with that EXACT same Santa. I thought it was hard to get two to look in the same general direction, but your three did it-and they look precious!

whose long legs were photoshopped onto baby Ike's body?

LMAO! those kiddos are adorable

Yay! You have a photo of all the boys together NOT looking at a screen; )

I'm pretty sure this is a Tresemme ad. I spend a crap load of money to have hair that remotely looks like your kids.

I love that I recognize that Santa from other Christmas pictures you've posted. Way to commit, mall guy!

That is a great, great photo. Well done!

Ike's hair is totally making my day today. I think your readers will cry almost as hard as you do when you finally have to cut it...

How many times can I comment how funny this is? Ok fine... hilarious!

That picture is the best! You really nailed the description.

Looks like someone had a drawer with the secret sweater stash cleverly hidden. How you found it is what I need to know. And quickly !~!

Cute kids, Amy, Happy Holidays to everyone (except that Elf from Helf.

A very good photo. The best Santa in existence.

Oh man they're all so big! Hilarious pic!

The more Lego, I hear you, sweet baby Jesus. My three boys have one million pieces of Lego and yet they asked FOR MORE LEGO WHHHHYYYYYYY.

My 3 year old Grandson asked Santa for the Lego Death Star. My son was so proud. His older brother is getting a crapload of Legos from Grandma. Because it is payback to my son. And he likes to play with them just as much.....sigh
Your boys are close to my Grandsons' ages and I just adore your pictures, and of course, every word that you write.

Our daughters are still freaked out by Santa and I can understand their concerns. Santa, however, pales in comparison to those creepy Easter Bunny costumes. Doesn't matter how fancy or expensive it is, always creepy.

Noah looks like he's ten years old in this picture. How'd you do that? Photoshop? Digging on those sweaters-Bam !~! You nailed the Cuteness Factor perfectly. Happy Holidays.

Did you see this? http://www.viralnova.com/santa-photos/
One pair of brothers gets photos taken with Santa for 34 years! I thought of you!!

First off, your kids are adorable! Secondly, to be honest I'm surprised that you do the elf on the shelf.