What better way to follow up a couple of snow days than with a couple of sick days? Yay! And hooray! I can't stop compulsively rhyming, hey!

Ike's been home with some crappy viral fever thing for two days now, and to say that I am having a "hard time" getting anything accomplished would be very much of an understatement. I don't actually believe I've "accomplished" anything at all, unless you count the 27 half-finished email drafts I've piled up and the 10 minutes I just spent staring at the word "accomplished" while trying to remember if it was a real word. Because it stopped looking like a real word there, for a bit, I think because of the "plished" part. Plished. Plished.

(In case it was not obvious, Ike's cold includes a terrible cough that gets even more terrible at night, so neither of us are sleeping very well. On the bright side, he calls coughing "coffee" and if you ask him how he's feeling he says, "I have coffee in my nose." That hasn't gotten old yet, although everything else about this snotty-coffee-low-grade-feverish state certainly has.)

Anyway, I'm hoping he gets better soon for his sake, because awwww poor little plishy, and also because I kinda need my arm back. 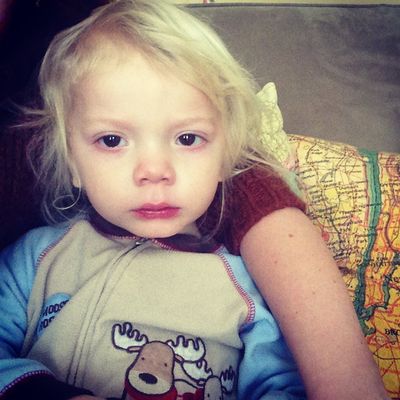 (No, I cannot explain my not-so-secret love of sick-baby-face photos. So sad! So sweet! So glassy-eyed! So cuddly-looking since you don't have to actually deal with the mucus leaking out of their faceholes!)

You've made a wave of snow days and illness seem sweet and funny, which is not how I've been experiencing it at our house, so thank you.

Who cares? Get a real job

Poor wee Ike. And poor wee JFA above who seems to have the maturity of a rabid baby squirrel.

Aww...poor Ike! Weird but true - rub Vicks on the bottom of his feet when he goes to bed - will help to stop the "coffee".

I am 34 weeks pregnant and my kids gave me a cold and I would really like my mom to come hang out with me while I sat on the couch in moose jammies. Basically, I am way jealous of your kid.

I second the Vicks vapor rub on the feet but add putting socks on over it. Sounds crazy but it works better then any cough medicine we have used.

Yup fifth to the vicks on the feet with socks. Magic!

Are those flu eyes? I think those are the eyes that made my ped test for flu last year :( Not that it would make a difference, I suppose.

Zarbee's makes an all-natural cough med for the little ones that we have had great success with. There's even a version that comes in a packet of crystals you mix in to water or juice that has melatonin in it - works like a charm!

Poor sweet little guy. I love sick face photos too for all the same reasons! Hope you guys get some sleep tonight.

Mmmm, having way too much fun imagining interesting words that the above initials "JFA" might stand for. C'mon, you all know the middle one.

Definitely the Vicks thing. I tried it myself and it worked. Also, maybe a teaspoon of honey at bedtime - this is something that my pediatrician suggested.

Sorry for the nasty bug that found your house. It's close cousin took residence in my gut and I feel like Ikey looks.

Ugh, sorry the terrible toddler virus has hit you. We had it last month. The cough will stick around for a while just to prepare you. Sorry!

I was wondering if you could post more about Ike's awesome hair. My 21-month-old son has really similar hair, and I love it, but it's definitely verging on the long side. He's a very "pretty" kid, if I do say so, and he's mistaken for a girl about once a week. This, despite the blues and stripes and high top sneakers and and and. Sometimes I'm thisclose to cutting it, but I just can't, at least not until he's two. How long are you thinking of going with Ike?

ETA, I hope he feels better! Sorry if my comment sounded like all I care about are his amazing locks.

Amy - did you see this article?

The boy sounds so much like Noah, or the way Noah was...