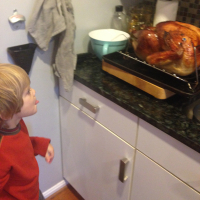 Our Thanksgiving kicked off in the traditional fashion, with a 2-year-old who decided to change his own diaper. Helpful! We found him up on his changing table, completely naked...and completely covered in a greasy coat of pine-scented diaper ointment . His hair (ohgodhishair), his face, his butt, his feet. Like he was preparing to go wrestle a live turkey in the backyard later, or something. (I mean, I know our Thanksgivings might get a little weird, but definitely not slicked-up toddler/farm animal wrestling weird. YET, anyway.) Ike was able to accomplish this feat of strength because we've been letting him bunk with his brothers most nights now. This has downsides, obviously, like a non-confined toddler running around the house pre-sunrise and a sharp increase in the levels of post-sunset mayhem. But it also allows us to pretty much ignore the whole three kids/two rooms situation. Noah sort of wants his own room, but only if nothing changes, like...new furniture or paint. Or getting rid of any of the nursery furniture. And he doesn't really want to sleep in different bed, even if it's another loft/bunk situation. And Ezra and Ike should be there too, because he might get lonely. On... Read more →