Home Archives About Subscribe Advice Smackdown Tip Jar
It's a Charlie Brown Dance Party, Y'all!
I'd Say I'm Going Stir Crazy But Y'all Know This Is Just My Natural State

The DC metro area was pounded over the weekend with like...I dunno. A couple inches of snow and a coating of slushy stuff. So naturally it was time to 1) panic, 2) BUY ALL THE BREAD, 3) CANCEL ALL THE SCHOOLS, and 4) realize how poorly outfitted my children are for winter weather.

I have a huge plastic bin full of snow pants, snow boots and other snow-related accessories. Most of the stuff inside still has the tags attached, since I apparently have the ability to control the weather.

If I buy my kids boots and snow pants ahead of time, all proactive-like, it will not snow that winter. I'm like the Snow Queen from Frozen, only in reverse and more shoppy. I wave my magic hands in the direction of a 40% off outerwear sale and BOOM. We will not see snow or ice again until my children have solidly outgrown whatever I just bought them.

So yesterday I hauled the bin out and started digging through it. Ezra very much wanted to go outside and play in the snow, so I needed to outfit him for blizzard-type conditions. (Note that you could still see the tips of the grass through the snow, so I fully realize that I am part of the "DC IS DUMB & WUSSY ABOUT SNOW" problem.)

He ended up going outside in snow pants that were at least two sizes too big — I cuffed up about four inches on the legs and tucked in a size 3T fleece shell to help fill out the waist. He wore unmarked boots in a unknown size that maybe kinda vaguely fit. I couldn't find a hat that adequately covered his ears, so he wore the hoods from both the toddler-sized fleece and his coat up. And while I DID have a nice pair of brand-new ski gloves that should have fit him, he proved to be utterly incapable of getting his fingers in the right glove holes and after 25 tries I gave up and sent him out in his non-waterproof mittens, both of which were completely snow-caked and useless within minutes. 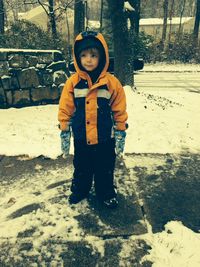 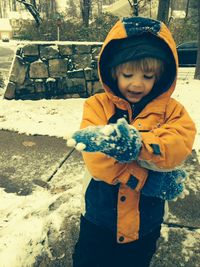 Noah asked if he could go outside as well, but I told him he had to wait until Ezra returned with the snow pants. And was he okay with wearing plastic bags rubber-banded around his shoes? The biggest boots we have are three sizes too small because you have giant hobbit feet all of a sudden. Also, I only have one ski glove and one knit glove in your size, and they are both for your left hand so you'll need to wear one of them backwards.

On second thought, Noah decided, he'd rather stay inside and play LEGOs for awhile.

Ike, on the other hand, could have had his choice of THREE different pairs of brand-new snow pants, thanks to hand-me-downs that I didn't realize were all basically the same size. (Technically a size too small for Ike but I am VERY good at mashing and squishing. I was *thisclose* to cramming my 5-year-old into the size 24 months pants but realized they'd probably be capri-length at best.) I found boots for him too, and a variety of hats. No mittens, OF COURSE, because of the mitten goblins.

Ike didn't go outside either, in the end. He took a long nap and by the time he woke up the snow had turned to sleet and grossness and was entirely non-magical. Jason braved the weather to run some errands (including donating our excess toddler snow pants and the AP-level ski gloves) and did procure some snow boots and snow pants for Noah.

Which means it will not snow again until at least 2015. YOU'RE WELCOME.

I live in Maine, so you'd think I'd be better prepared for winter to arrive, but no. I do the exact same thing every year.

I don't know-I think your magical powers might be waning cause SNOW. AGAIN. TOMORROW. WHOOHOO. (can you tell I'm a teacher?-I think in your neck of the woods too-Montgomery County)

I'm never prepared, even though I live in Michigan. One thing I have learned is that the plastic bags go INSIDE the shoes (which need to be a pair that can be set aside to dry for a while). Bags on the outside are just slippery. As long as the feet are dry, it doesn't matter what happens to the shoes.

83 degrees yesterday on the west coast of Florida. Long range outlook is more of the same. Santa will need a Speedo to deliver pressies here!

I am prone to buying random outwear when it goes on clearance at Lands End. Everything fits this year, but I realized this morning that my son's 'outfit' features: blue hat, red coat, brown snow pants, green gloves and black boots. I think he needs something yellow just to tie it all together.

Texas may have you beat. We get a little precipitation coupled with below freezing temps, and THE WHOLE CITY SHUTS DOWN. Almost. It's annoying, but then again no one here knows how to drive in it, so it's probably for the best.

No shame in this game, Amy. My girlfriend out in Oklahoma proudly sent her kid out in double-layered plastic bag feet last week. And I just sent my mother on an Emergency Children's Place run to get our 3yo son snow pants and a hat that fits him because we had NONE. NONE. Snow pants are a complete racket. I feel like we should just be wrapping their legs in Saran Wrap and sending them out in it because they're just going to outgrow them! Probably before the end of the season at this age. Dang growing boys (and girls) wasting all of our money on snowpants when we could be buying cognac to spike our hot cocoa with!

Nebraska-7 inches of snow, followed by some lovely sleet. School- of course! Do I have boots, gloves, hats...anything for my kids this morning. Just for the youngest- a random assortment of hand me downs, the older 2 boys just grew like freaks since last winter. Plus my 9 yr old refused to wear my gloves or hat (they are black- it is not like they are hello kitty) because they are girls clothing. Sheesh- hopefully they have indoor recess.

...or you could live where I am (Shenandoah Valley). 6 inches plus a layer of ice! Another 6 tomorrow! It will never be above be above freezing again!

A friend is high on the mountain. A family member (who no one really likes) came for thanksgiving and got the flu. Finally was well enough to get out yesterday except trapped. And if it's like last year it will be January before they get out again. Nothing says fun like a houseguest for weeks!

I crammed my 15 month old into a 6-9 month sized snow suit, and my 4.5 year old into a 3T. A couple years ago, when it snowed on Halloween here in DC, we bought the oldest cute snow boots from LL Bean. And then of course it didn't snow until the next year. So I am on the fence. Is new winter gear needed, or no?

We were always sent out to play in the snow with plastic bags over the non-waterproof mittens as well, rather than fancy waterproof gloves. It all added to the magic of the snow experience.

Reading these comments and suddenly glad it will be a hot Christmas in Florida!

Yep, another 3 -5" possible for us in the DC area tomorrow... don't suppose you made it to a Target today for more outerwear, didja?

North Florida here and it was 72 this afternoon. I dunno what I would do if it actually got cold here... y'all have to do a lot of laundry, don't you?

If you have never worn socks as mittens..you haven't lived!

In NC, our highs zigzagged from 77 to 44. But if we manage to get ice/snow this year, I am mostly ready. Although the little girl has outgrown her awesome snow pants - le sigh. When I was in college, I made a pants liner out of garbage bags and duct tape, which worked beautifully in cold snowy weather. I could work up something for the kiddo, but usually I am all about random children's winter clothing on clearance. Or when I visit my inlaws in the snowy north.

Also, your third paragraph in particular is So. Full. of. Win. I can hardly stand it.

I'm trying desperately to not wake my own 5 year old with my LOLing at this.

I did actually make my first purchase of snow pants (we've managed to score hand-me-downs until now) this year, and she promptly scuffed, scraped, blackened and actually wore holes through the cuffs and knees the first time she wore them, sitting on a curb at the not-snowy-but-plenty-damn-cold Christmas parade.

She wore them yesterday and today, by God, but now I have to be annoyed every time I see them.

And, in my 16th winter in the mid-Atlantic, I finally bought myself a pair of snow pants - waterproof outside, fuzzy warm stuff inside, and absolutely glorious after years of frozen thighs! (I only bought snow gloves last year, after trying to build snowmen in knit gloves. I am evidently not as smart as I'd like to think.)

We also have a "winter bag" that holds at least 20 semi-matched mittens and gloves, none of which seem to fit any of us. And there's only two women and one kid. How hard is it?

Reading these comments make me wonder for the 10,000,0000th time this week (& it's only Tuesday!), why do I live in ND? I need to move somewhere warmer so I can wonder if I have winter clothes for my kids. lol My issue now is that I have teens & they don't want to wear warm boots or coats, even though the high (without windchill) for the day is forecast to be BELOW zero. And yeah, we won't see grass again for at least 4 months.

And I'm on the west coast and snow never happens. But it's butt cold outside. Coming from AZ I had to buy winter coats for the first time ever 3 years ago. I now have like 4. I just...they're not warm enuf or they annoy my arms or whatever. I also have a bucket of cold weather gear and realized that I sent an entire set of matched clothes to a friend when she was taking her kid "up North" in AZ. So kid #2 was in piecemeal crap when we visited DC for Turkey Day. LOL

Another Texan chiming in. We got maybe a couple of inches of ice and pretty much the whole state was shut down. The day before "icemaggedon" the high was 80 degrees. So my daughter wanted to play in the "snow" (not snow, sorry kid) but wear her Crocs...with no socks. We are very confused here in Texas.

And from Winnipeg, Manitoba, Canada, it's currently -6F (with the wind it feels like -28F).

We have a -45F (ambient temperature + wind) warning tonight, where exposed skin will freeze in less than 10 minutes.

This morning was a toasty at -11F (with the wind it felt like -25F) and my kids still went to school and we still went to work. And we have lots and lots of snow!