Things I Have Been Doing

1) Not getting any better at coming up with interesting blog post titles. OBVIOUSLY.

Ten years, I've been at this. I'm thinking that post titles are just never going to be a skill and I should make peace with that. From here on out expect me to just start titling every post "Things" and "Stuff" and "ASDFGHJKL."

2) Putting various things back together with Scotch Tape and gum.

About five minutes after our last Thanksgiving guest left, everything in my house fell apart. Seriously. Towel hooks suddenly fell off of the wall. The garbage disposal started leaking. A cabinet door came off its hinges. And worst, most terrible of all: 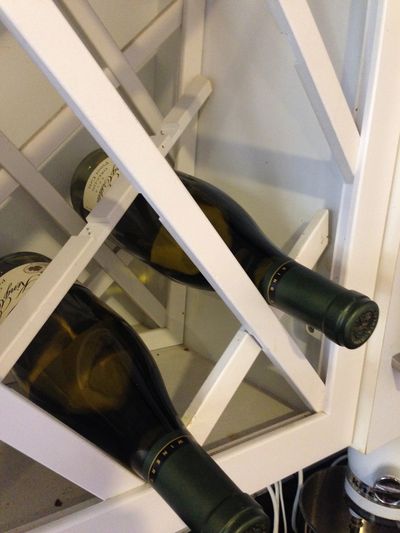 MY WINE RACK BROKE. Presumably from the strain of years of repeated heavy overuse. Thankfully, no bottles of wine were harmed in the collapse, though clearly they will all need to be drunk ASAP. Because. Because of the reasons.

3) Getting festive as shee-it up in this bitch.

Our Christmas tree is up. And decorated. 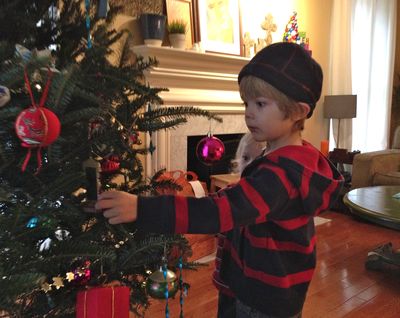 (I put up almost nothing but cheap, shatter-resistant ornaments this year, but then Jason insisted on digging out the full collection of Nostalgic Nerd Things and added all our old Star Wars/Star Trek/LOTR ones. 24 hours later, Luke Skywalker's head has fallen off and the Borg Cube is missing.)

Advent matchboxes are hung. And packed with candy. 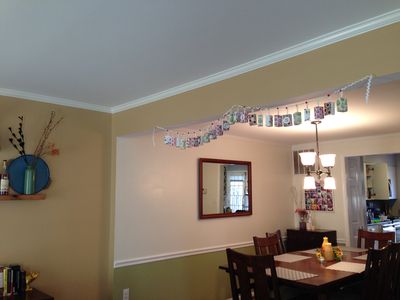 I put them up super high to prevent Ike from ransacking an entire months' worth of chocolate at the first unsupervised opportunity. This placement gets bonus points because NOW whenever one of us asks "Uhhh, where's Ike?", 99% of the time the answer is "on the floor underneath the Advent boxes wailing despondently for candy."

purchased, displayed and apparently forming some kind of weird cult in our living room. 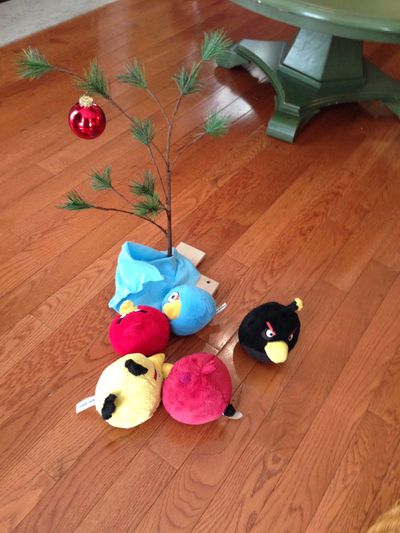 COME ALL YE FAITHFUL AND YE ANGRY. HAIL TO THE TREEEEE.

As part of my resolution to Be Somebody Who Holiday Decorates All Of A Sudden, Apparently, I bought two lovely, thriving poinsettias over the weekend. I brought them home, carried them to my front step, and then went inside to find some better-looking pots for them. Once inside, I VERY COMPLETELY LITERALLY got distracted by something shiny — specifically a package of glittery ornaments I'd also purchased — and forgot about the plants. For awhile. Like overnight. 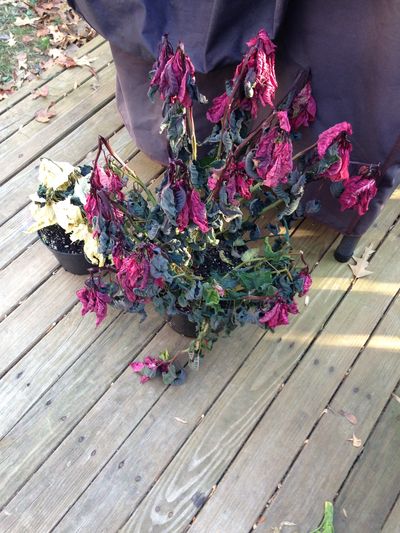 HAPPY HOLIDAYS. WELCOME TO MY HOME. WHERE BEAUTY COMES TO DIE. I LIKE YOUR HAIR. I WILL STEAL IT TONIGHT WHILE YOU SLEEP.

5) Being dumb and slightly unhelpful, as per usual.

"Because of the Find My iPhone thing," I sighed.

"How would that help?"

"Uh, it won't," I answered. "Because you don't have an iPhone anymore."

"Because! We could use my phone to make sure it was still in the house! But you don't have an iPhone anymore so NEVER MIND."

I seriously could not figure out why he was so confused over this concept. To his credit he decided to simply walk away at that point (and probably go recheck the couch cushions) and wait for the realization that a wallet is not an iPhone to dawn on me on its own.

Which it did! A few minutes later. And a few minutes after that Jason found his wallet stuck in the space between our fridge and a kitchen cabinet. Everyone's a winner!

Breathtakingly funny. The Charlie Brown Tree Cult is STILL making me snicker. Mele Kalikimaka and much aloha to you Storches!

You did better than us. Our brand-new, discounted to $0.99 at Lowes poinsettia spent the night in the car Friday, in sub-freezing weather. Similar results. It's already in the compost bin. I put it there when I finally took the pumpkins out.

I love you. In the most non-creepy, don't-actually-know-you way. :)

Your usual awesomeness! Thank you. I needed it today!

My husband and your husband would have a LOT to talk about. And I have no idea why that image is so funny, but it is.

Titles are overrated. You could try using working titles and leaving them, such as The Raspberry Project. Also, since you excel at writing bullet point headings, use one of them (include the number for special effect).

You made my week! I laughed out loud about the plants I would totally do the same thing!

The iPhone/wallet thing is something I would do, but I doubt my husband would just walk away without pointing out reasons find my iPhone would not be helpful. =)

Someone needs to invent Find My Wallet and Find My Keys.

The pointsettia debacle is hilarious. I thought I was the only one who could be this forgetful. It's very reassuring to discover I'm not.

http://www.thetileapp.com/
Tile is coming out which is a chip to attach to your keys, but yes, you would need your iphone or ipod to find it. ;)

My wine rack will never break because wine never stays on it long enough to put it under any kind of strain.

Hahaha I love the self-righteous phone debate. I thought I was the only one who did stuff like that!

All these years later and I wish I'd started my very first post title with whatever the day was. It would have been so much easier.

Might be uncomfortable in tight cars but hey! Won't get lost.

Ezra looks like an adorable Christmas elf in that picture.

My good friends just had a baby named Ezra, and your Ezra was my first thought on hearing the name!

I think "Plant Murder and Other Dumb and Slightly Unhelpful Things" would have made a great post title.

The ponsietta thing? That'd totally be me. They're crazy poisonous anyway.

I left a basil plant in the car a whole weekend. It was summer and very hot, but the plant was still alive when I found it. Unfortunately it had developed an allergy to water, so it died after I watered it.

Ah Amalah - as always thank you. Thank you for helping us feel normal, and that our lives really could be hilarious - if only we had the amazing writing ability you have in your left pinky.

Thank you for all you do for us. I cannot list the many ways in which you enrich my life with your kids.

Congrats! you just made a pregnant lady pee a little :)

(That may have sounded less disgusting in my head, I apologize in advance)

Hilarious, I love that you were literally distracted by something shiny. Oh, Amalah, never change, terrible blog post titles and all.

Oh how I adore your writings, thank you for being you, and for making my week :)!

That made me laugh for a full five minutes straight. Awesome.

Funny stuffs :)
OK so my husband is getting this for Christmas: All cards in one AND your iphone WILL TELL YOU WHERE IT IS.

It sounds perfect. OK well it's preorder only right now but a summer 2014 roll out! You gotta check it out.

I spent quite a bit of time searching for my iPhone once. While I was using it to talk to my mom. I've also tried to open the garage door with it.