Ezra asked if he could play with the iPad. I told him not right now, please put away the Play-Doh first, as there were currently twenty-goddamn-four cans

' worth of Play-Doh all over my kitchen counter.

Ezra argued that the random Play-Doh lumps and glumps were all very imporant "food things" that he created for our "dinner" and "dessert." But not today's dinner and dessert, tomorrow's dinner and dessert, because it needed to "dry out." Then we could eat it. If I made him clean it up, we'd starve. Also, he'd be mad. At me.

I repeated my request that he clean up the mess first, adding my objection to intentionally ruining our entire supply of Play-Doh.

He responded by glaring the glariest, darkest glare his cherubic face could manage before storming over to our chalkboard wall. He picked up a piece of chalk and scribbled something out with great purpose.

"THAT'S MY HEART," he announced, before adding one final flourish. "AND THAT'S A CRACK IN IT."

"And the crack is ALL YOUR FAULT." 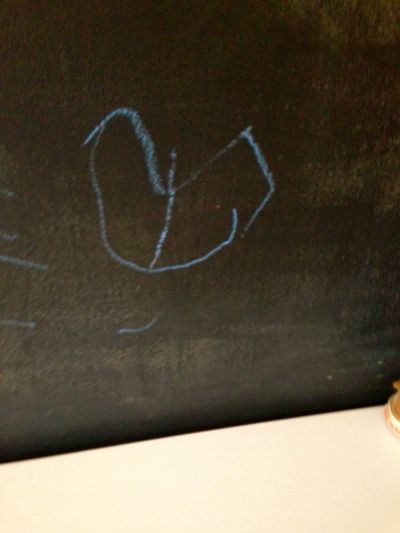 He threw down the chalk and ran out of the room, then thought better of it and came back to put the chalk back in its proper place before stomping off again.

A few minutes later he returned, this time with a proposal. He would clean up the Play-Doh first, then he'd put away some Legos and the Angry Birds set, and then he'd get to play with the iPad. Okay?

I pretended to consider this deal very carefully before agreeing.

"Hooray!" Ezra shouted, throwing himself at my legs and hugging them tight. "Now my heart isn't cracked anymore! You glued it back together!"

(We left the drawing on the chalkboard wall, though, as a reminder: There's no stronger heart-glue than a mother's love. A mother's terrible, manipulative, sneaky-as-hell love.)

Ez continues his reign as my favorite of your children. Thank god I'm not their mom so I can say that.

Ah yes, I have been accused of causing similar breaks. We are awful, horrible, cruel creatures when we require any semblance of order. lol.

When my oldest (also 5) has been disciplined, warned or otherwise rebuffed, he will often tell us very sternly / sadly "You have broken my heart!"
It breaks MY heart a little each time I hear that from mahhhhh baaaaaby.
But I may be completely immune to it by the time his little brother is old enough for the dramatic declarations. Poor little brother.

Ezra and my daughter would get along well. Often when I tell her I'm putting 5 minutes on the Time Timer (which is made of MAGIC, thank you, Amy, for that rec), she will insist, "NO! ONE minute on the Time Timer!" It's times like those that the money I spent on theater classes in college seems worth it.

Oh my god that is hilarious! Love that he came back to put the chalk up!

And this is why I love teaching 4 and 5 year olds.
Awesome.

Hahahaha, I love this! The drama!

Another one for the Kids Are Great, Aren't They file.

I love you. I love your kids. I love Ezra. Please have another baby.

I love Ez. And I love that other parents get blamed for every stinking thing in the entire unicorn, just like I do.

I love this post! That little Ezra is such a character!

Ah, the magic that is the tablet/smartphone/gaming device. Our 3 yr old is similarly afflicted, and I've realized that when she wants to play on one of them that is one of the greatest bargaining chips I have. That and cookies.

Oh, good. I see I am not the only one who cracks my child's heart.

GENIUS! You are a Jedi Master of Motherhood.

I don't know how you live with all the cuteness everyday.

Ok I keep seeing these pictures and thinkng that Ike is Ezra and where the hell did you put the baby. I also LOVE that you cracked his heart but he found it in his heart to forgive you, omg cuteness!!

Really? He came back in and put the chalk in the correct place?

I bow down to your mother-of-all-mother status.

When my sister upset my oldest niece (she was 2), my niece said, "You are NOT making all of my dreams come true". I love little ones....

Who's the most magnificent mom in all of the Midwest ?~!