LADIES AND GENTLEMAN OF THE JURY:

This is what Ike's Hairz looked like yesterday, after a good long nap: 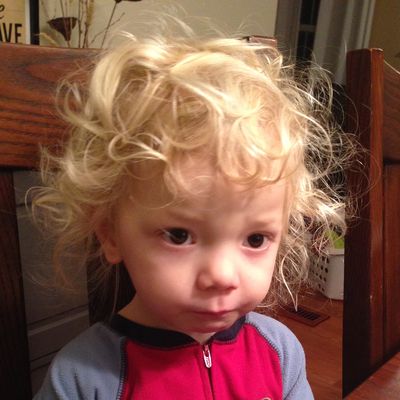 GLORIOUS, is how Ike's Hairz looked. 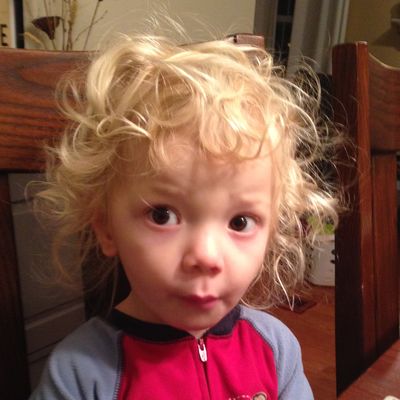 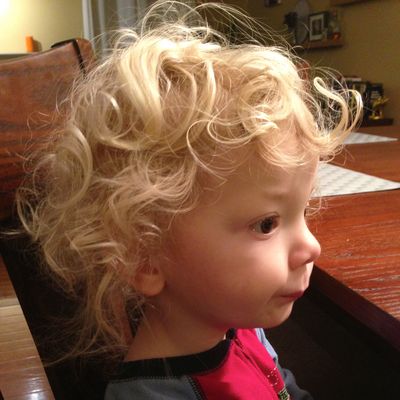 And I think that about sums up the remainder of my feelings on the haircut topic. Let us never speak of it again; let us only shove all of our fingers into those curls five hundred times a day until the poor baby's like, "STAHP IT, MAH HAIRZ."

BONUS EZRA, FOR YOUR WEEKEND ENJOYMENT:

Every morning, Ezra starts with the same question. "You know what dream I had?" he asks.

What follows is not really ever an accurate description of a real dream, but more of a early-morning free-form short story/tall tale rap session. Every dream gets a title and a detailed cast of characters culled from TV shows, movies or books, with storylines inspired by completely different TV shows, movies or books, and Ezra delivers it all with the most dramatic, edge-of-your-seat delivery a 5-year-old can muster. It's like crossover fan fiction for the preschool set.

(The Angry Birds Dream, for example, features the birds going through a portal to battle El Macho from Despicable Me 2, but then Captain Underpants shows up, and there is a space battle, and also a laser, which they all use to cook soup. But it's...breakfast soup! And it's...spicy! Wicked plot twist, there. Good times.)

Anyway, last night's "dream," according to Ezra, was "the Star Chart dream."

(I thought this was interesting, as Ezra has been struggling with his star chart — namely, the star he receives for getting out of bed and getting dressed on his own, without Mom or Dad having to nag him 300 times before eventually hauling him out by his legs and physically shoving body parts into clothing holes on his behalf. I perked up in hopes that this dream would involve some villain getting his Star Chart comeuppance for being a pain in the butt about putting his pants on.)

"Yeah, the Star Chart Dream!" Ezra continued. "And the Umperprise was there, but then the bad guy pokey ship came and destroyed the whole Umperprise!"

"Ezra, do you mean Star Trek? With the Enterprise?"

"That's what I said. The UMPERPRISE. From STAR CHART." 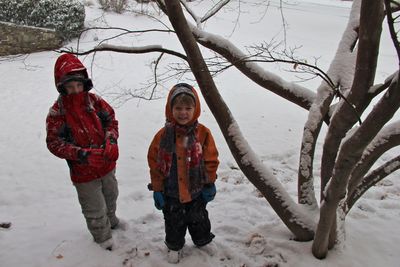 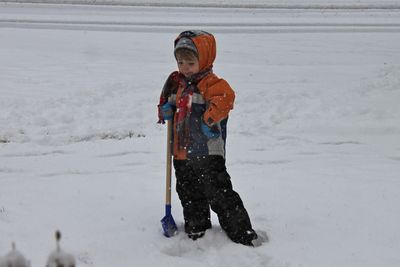 So putting Ike in pajamas is still working for napping? Congratulations on a winning strategy. I figured that would only last a week but am happy to hear otherwise!

Dude. Leave his hairz alone. My Charlie's hair looked very similar to that until I caved to all the "OMG cut his hair already" pressure and we walked away with a toddler mullet that I HATED and now also his curls are mostly gone. You will regret it, trust me.

I wouldn't cut it either. Awesome hair. Let it grow and just put it in a bun like Jared Leto at the Golden Globes. It would be so cool to have a preschooler boy with a bun.

He is adorable. No doubt about it. But I would cut that hair immediately. Like tomorrow. Or tonight even. I guess I'm the only dissenter. My lord he's cute though.

Oh my god in heaven does that baby have glorious hairz. And the facial expression(s) in these pics are just perfect, too.

Did you see JLo's little boy Max? He was rocking a boy bun the other day. Let the boyz hairz grow!

My son will be 2 next month, and I often use the boy bun for him. Love it.

All I could think of when I read Ezra's Enterprise mangling was how much like The Goonies it was: "That's what I said, BOOTY TRAP!"

A pox on all the scissors! Ike's hair wins everything, forever.

I read "star chart" and immediately pictured Ezra puzzling over some complicated zodiac scroll trying to figure out he was born under a Libra or Gemini moon.

It goes without saying but I'm going to go ahead and say it anyway. Your kids are just awesome. Thank you for making me smile, I certainly needed it today.

My 5 year old has the same story telling technique and it's adorable, if slightly too loud for 6am. I also love their little word slips. My boy was trying to explain something to me the other day that I just wasn't getting. He looked at me and said 'Mommy, it's not rocks and science!' and I just about peed myself laughing.
Re: The Hair! Jealous. That is all.

I didn't cut my boys' hair until they were 2. they had long hair till then.

Jesus lorrrd, I love his hairzz!!
Can he come live with me for a few days? A large Black woman with a delicious blonde baby..not weird at all huh? ;)

Ike really does look like one of those Precious Moments figurines come to life (in the best possible way!)

Ezra cracks me up and I would listen for days to those stories of his dreams. Now the Hairz, I would bury my face in it every chance I got and Never Ever cut it until he asks. And even then, perhaps not just yet !~!

I keep coming back to this post, over and over, so I can admire the curlz. I can't help it.