The Desolation of Organization

The boys spent most of Sunday in the basement playroom, which is always a victory in an of itself. Even though it's where all of the toys and the furniture you are ALLOWED TO JUMP ON are and where Mom IS NOT, so KNOCK YOURSELF OUT with the FLAILING and the HOOTING and the HOLLERING, the basement playroom is always a second- or third-choice option for them. It's almost a punishment to go down there — with all those wonderful toys and wide open play spaces and non-pointy corners — especially since it's where I inevitably banish them after the seventh lap around the dining room table, while they make machine-gun sound effects and beat on each other with giant plastic crayon banks. 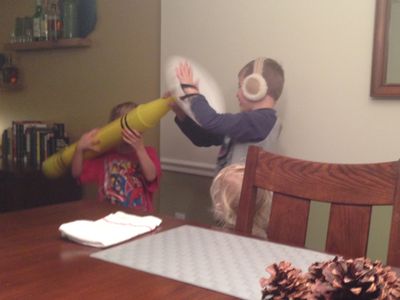 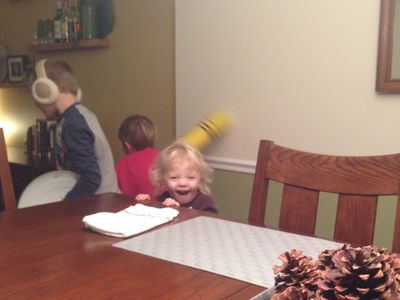 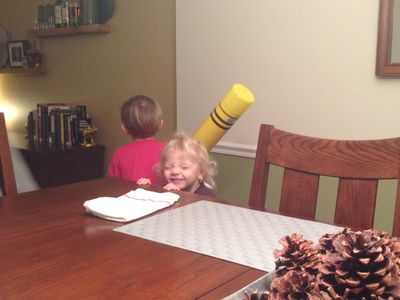 The basement playroom miracle is multiplied by infinity if they spend their time there doing anything other than bothering each other, tattling on each other, or haphazardly dumping basket after bin after bucket of toys out on the floor.

("But I couldn't find my red car! No, not that red car. Or that one. Or any of those dozen or so other red cars. MY car. The RED one. Mom, stop helping.")

At first glance, that's exactly what they were going... 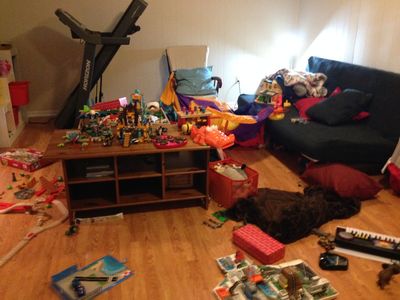 ...until Noah and Ezra excitedly explained to me that no, this wasn't just a mess, this was a very carefully planned replica of Middle Earth. The parachute tent in the corner is Bilbo Baggins' hobbit house, while the Sesame Street playhouse fills in for the rest of the Shire. The brown blanket is some kind of swamp, the playsets in the foreground are Gondor, the Lego sets on the table are Mordor and the unholy combination of Thomas train tracks/Angry Birds Go track on the far left are the mines of Moria. The keyboard is there to make "exciting music."

(Not pictured: The One Ring, aka a rubber Lego tire that I later had to confiscate for choking hazard concerns and also because I got tired of everybody insisting that I couldn't see that they weren't changing into their pajamas, they were invisible.)

Now, I'm no Tolkien expert so I'm gonna guess there's some major geographical errors in this layout, but I have to say it's pretty impressive for kids who have only seen a few short, cherry-picked scenes from the actual movies and have gleaned most of their knowledge from the Lego game version. Also, Ezra stocked Bilbo's house with cupcakes. "Hobbit cupcakes. For second breakfast."

In summary, this is why I couldn't run on the treadmill this morning. Bum. Mer.

awesome! they even knew about second breakfast?? double awesome!

That second picture is just the best ever.

I finally put my finger on what his expression reminded me of:

Your boys are BRILLIANT and I could eat Ike for second breakfast.

(long long time reader, rarely comment but I just could *not* resist this time!)

Thank you for telling me that your boys rarely go to the basement playroom. We have one as well and my three will NOT play in there. But run around the dining room table screaming like banshees happens 24069 times a day (but mainly when I'm cooking dinner & their "route" includes the kitchen). It drives me crazy.

In the land of Mordor where the Legos lie.

Mine know about second breakfast because for years the youngest had breakfast with the older two before they left for school...and then "another breakfast" after they left. She' seen a hobbit for years!

LOVE Ike's expressions! It's like he can't believe the war is happening right in front of Mom and they're getting away with it.

Ah I see you too are familiar with the lego chima lion temple with its tiny tiny chi pieces... Its currently resides on our dining room table. Santa brought it, but since it was a 10 pack build made by my husband on xmas day - we are afraid to move it to the playroom - in-case it gets smashed to oblivion by the 2.5 years olds. Although since like your boys they never darken the door of said "playroom" its probably the safest place for it!

Second breakfast is my favorite meal of the day!