Jason left for a short business trip yesterday, right after I got back from my suuuuuper-relaxing dental appointment and a milk/eggs/cereal run, because I know how to Treat Mah Self.

And I do mean short. As in, he's already on his way home now. Less than 30 hours of solo parenting. Way less once you factor in 1) sleep and 2) the fact that I mostly hid from my children all afternoon yesterday. I put Ike down for a nap, deposited every blinky-gaming-type phone/tablet/screen we own on the coffee table for the older two, then barricaded myself in my office and tried to get work done. Nobody was to bother me unless they were bleeding. Profusely. Y'all know where the band-aids are, work it out.

Even dinner was leftovers, for God's sake — I made some rice and nuked up bowls of our Surprising Recipe Home Run Success of the Month, aka a curried lentil and swiss chard stew with chickpeas, aka one of those ideas you get that flies in the face of all good sense and logic and totally works out anyway.

My kids — a couple of whom have been known to reject grilled cheese for being "too cheesy" and who don't understand why I have to ruin perfectly good plain spaghetti with unnecessary toppings like "sauce" or "anything at all" — absolutely loved this stew and ate multiple bowls of it. (Though I do recommend serving it over some kind of rice/grain since it's like a very thick curry.) 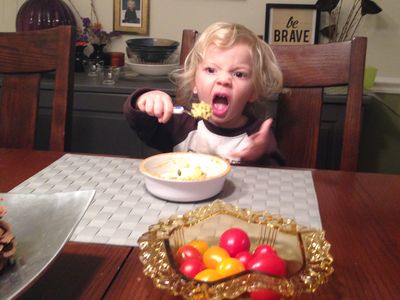 GET IN MY FACE HOLE, DELICIOUS PILE OF THINGS 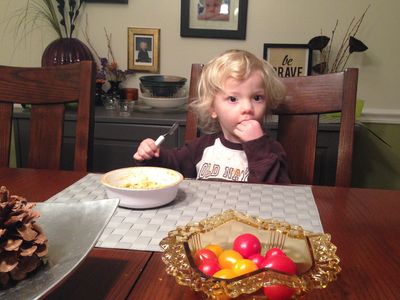 (Shout out to Ezra for the cherry tomatoes in the Fancy Bowl. He also spooned yogurt for the stew into a different Fancy Bowl, and yes, he insisted on wearing his full chef regalia for both of those important tasks, including potholder mittens.)

After dinner, we watched a movie, thanks to a poorly thought out potty-training agreement-slash-bribery-system that I am now regretting, and then everybody went off to bed and I was free to revel in having full control over the TV and indulge in whatever weird tearjerker indie movie I wanted.

I know it's probably pretty pathetic to feel...I don't know...proud? Accomplished? When all you've really done is provide somewhat adequate care for your own children, but there it is. In the land of lowered expectations, last night was a slam dunk of damn fine mothering.

And then there was this morning. It was. Um.

I could bore you with all the tiny details of everything I had to get done and by what time, where everybody needed to be and what they needed to bring/take/pack (plus I had an early doctor's appointment that negated the "just drive everybody to school in your pajamas, who cares" option), but let's just say there was a point where I was literally begging a hysterically crying toddler to "help me out here, okay. Just get a grip and help me." That worked about as well as you'd expect.

(Why was he crying hysterically, you ask? Oh, you know, all the usual reasons.)

(I am starting to suspect that Ike is simply Not A Morning Person.)

That sadly wasn't even the low point of the morning — that was probably when Ezra started making lunch requests and I mildly flipped out at him because I'd packed the bulk of their lunches the night before and was now too stressed and high strung to deal with a kid who wanted a banana in his lunch when I'd already packed raspberries. OMG LOOK AT THE CLOCK, LIKE WHAT AM I SUPPOSED TO DO, I CANNOT PROCESS WHAT YOU ARE ASKING, STOP MAKING THESE IMPOSSIBLE LOGISTICAL REQUESTS AT 7:15 IN THE MORNING.

(Eventually my problem-solving skills returned to me. I gave Ezra the raspberries for breakfast and put a banana in his lunchbox. I'm thinking maybe the grumpy-asshole-in-the-morning-thing might come from my side of the genetic pond.)

In summary, single parents of the world, I raise a glass box of wine to you.

Thanks for making me laugh! Last night my 14 yo daughter asked if she could make a smoothie while I was trying to make dinner while looking at a huge pile of dishes in the sink (I hate cooking when there are dirty dishes, ahhhh), and I freeeked out, because NO that is too stressful, you can't be in the kitchen when I am unless you do the dishes. My kids think I am a weirdo!

Those pictures are priceless! I love that you include links to all of the little things that help get you through your day too

That first picture of Ike is priceless.

I'm a single mom, but I only have one kid which seems much more manageable than 3. I made her cry on Sunday because I dared put Parmesan cheese from the plastic tub on my lunch. Because you see, that plastic container and the cheese contained within apparently belonged to her. Unbeknownst to me. So panic and anger followed along with her smacking the crap out of me. Because I PUT CHEESE ON MY LUNCH. Cheese that belonged to my two-year-old. Please tell me this goes away??

My in-laws and my husband think that my toddler has some sort of debilitating emotional disorder because of his occasional unreasonable meltdowns. I just try to tell them it's their fault for talking to him/ignoring him/giving him what he wants/doesn't want in the first place, and they just get what's coming.

Oh, those pictures of Ike! Best laugh of the day.

(Gene Wilder, crooning)
"Come with me, and you'll be,
In a WORLD OF LOWERED EXPECTATIONS!"

You and me is besties, Amalah.
BESTIES.

Totally feel you. My husband was gone for almost 72 hours and I was not totally sure he would return to my 32 month old twins and I all alive or fed or clean or whatever. Blergh! How do single working moms do it? Screw the wine, you can have my bottle of whiskey.

Ohhhhh I get it! Single Mom by Choice (not divorce) so have always been on my own with my two boys. You had me laughing out loud (as you often do!) Every time a coworker is left on their own with their kids for a night or two or even a week, they are in my office wondering how I do it. I think that it is a lot harder to be on your own when you are used to having another adult there, but if you never had it, you actually don't know any better!

That first picture of Ike made my day. Too funny. I have also asked a toddler to "help me out." Yeah. Not so much.

Goodo, I'm glad I'm not the only one who puts kids to bed, rubs hands together and puts on "whatever weird tearjerker indie movie I want". It's a fabulous, lowered expectations highlight in a world of domestic chore-ery and bicker-sorting.

Ha, yes. I travel for work more often than my husband, but due to his insane hours I very very rarely have help in the morning, and not that often at night either. Honestly, when he goes away for work trips its not all that much different from when he's home. However, when he has to leave for a work trip on the weekend all hell breaks loose. What do you mean you're cutting into my solos grocery/laundry/errands time?!? NO!!!

I will take that box of wine because this is my weekend alone and I intend to spend most of it sleeping off the past week of stir crazy, snowmaggedonishness.

That first picture of Ike is hilarious. Good to see that he 'eats like a boss!' :)

That photo of Ike is so cute - it looks amazingly like your logo photo!

I'm flying solo for 6 weeks while my hubby is overseas for work with 3 kids. As in, I have 720 hours left to go (who is counting?). Single parents, especially by choice...how?? How do you do it? The kid stuff I'm good with, but that PLUS working full time, all the household running stuff, garbage, recycling, grocery shopping, etc, and I'm supposed to excercise on top of that? Wine please!

"help me out here, okay. Just get a grip and help me."

I ask that every.single.morning. Sometimes, I think she can see the desperation in my eyes and cuts me a break. Other times, not so much.

That first photo of Ike, omg. Made my day!

Military family and have 4 kids. Yeah. Been there. This is why I'm currently living with my parents for 6 months because it's SO MUCH BETTER than doing it on my own full time.

My hubby returned from a 6-month deployment to Afghanistan this fall and please don't tell him . . . but it was almost easier without him here sometimes!

Once I got over the shock of it? (i.e, once I got out of my pajamas five weeks and 15 pounds gained into it) It was a lot simpler. And my standards were a lot lower!

Now that he's been home for a couple of months? I can barely function on the mornings that he has to work early! Not sure how we survived!

Haha, I feel the same way when my husband goes on a business trip, and my kids are at daycare all day! Yes, I do want a cookie. Thank you for asking.

Husband travels multiple days a week - sometimes all week - multiple weeks a month. It is not even close to the same as being a single parent, I know that, but after one particularly long trip, I told him there's no way I'm ever being a single mom and so he can do pretty much whatever he wants but he will not be able to get a divorce until college is over. Luckily, he wants to stick around with me. :-)

That first picture of Ike is PRICELESS!! My 5yo and I are still laughing. He's adorable :)