I hope I've told y'all this before, but just be sure I'll tell you again: You are the best. You. And you. All of you. I'm making swirly-type all-inclusive hand motions at my laptop screen. Thank you for all being so polite and kind and encouraging this week, in comments and emails. I've read every single one and hopefully can start plowing through some replies soon. (As for the TwitBookFace thingies, I hope you'll forgive me for being too skittish to look over there right now. Everything is too calm and reasonable! The crazy/mean people must be hiding somewhere else! Let's...not go looking for them.) Anyway, I'm not entirely sure what to write about next. It's been a lot to process. I guess let's start with some blunt talk about ADD/ADHD medication. What could go wrong? That's not controversial at all! Ha ha! Man, it's too early to be this drunk. Noah started his medication yesterday morning. We waited until he could see his regular therapist on Monday, who guided us through the conversation about ADD and what it is and what the medication does. And what it doesn't, since Noah was very scared that it would change him or... Read more →

The Long and Winding Road

Last week, out of the blue, one of the doctors finally called us back. The one we wanted to see in the first place, but had given up on. He could see us on Sunday. Would that work? Uh. Yes? Noah and I spent several hours with him yesterday. I sat with my giant binder on my lap — every piece of important paper we've generated since the Early Intervention days — while Noah played with a Magic 8 Ball and simultaneously broke my heart and took my breath away with his amazingly self-aware and articulate answers to the doctor's questions. I see too many things all the time. I'm always distracted. My ears don't work. My brain needs to be fixed. Can you help fix it? I want to be smart and I'm not. My ways are not the world's ways. And: There's a war in my head and the bad guys are winning. Of course, these responses came out in between long, detailed descriptions of the entire plot of The Lord of the Rings trilogy, and were spoken while he turned upside-down and backwards on the couch, as if it were physically painful for him to sit still... Read more → 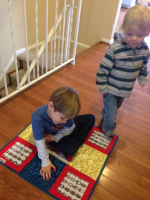 Oh, so remember when I was all, "I totally potty trained the baby!" and gave away a bunch of diapers and was basically an insufferable smug asshole for like, 48 hours about it? CORRECTED TIMELINE, ONE MONTH LATER: Hey guess what! I totally potty trained the baby! (Silent, internal screaming) It turns out that what I thought was our "breakthrough moment" was kind of a false alarm. We were close, but not really there yet. The Braxton-Hicks of potty training, as it were. Ike decided that having accidents at school were, on second thought, not such a big deal at all. Neither were accidents at home. Our clever little prompt/refrain of "clean and dry" quickly lost all sense and meaning, as he would happily chirp this at me WHILE ACTIVELY PEEING HIS PANTS. Three weeks of this. Three solid weeks of zero success, endless loads of laundry, much crippling doubt in our decision to ever undertake this stupid training business in the first place, because that child was having none. Of. It. (I'm sorry, Future Ike, for documenting this in such detail but YOU NEED TO KNOW. YOUR STUBBORN STREAK HAS LED YOU TO MUCH RIDICULOUSNESS IN THE PAST. PERHAPS... Read more →

It's Not a Toy, It's Mommy's Highly Sophisticated Interlocking Brick System Even though we agreed on a no-gifts sort of Valentine's Day this year, I can't say I was all that surprised at the sight of a large box wrapped in bright pink paper on our bed. Jason stood nearby, shrugging sheepishly. He never sticks with gift-related plans. Chocolates? Lingerie? Jewelry? Clothing? NOPE. LEGO. And not just any LEGO, but ages 12 and up LEGO. Boom chicka wow, baby. I had a serious geek-out moment over this set a couple weeks ago, when I saw it fully assembled at a LEGO Store, where we were killing some time while waiting for the next showing of The LEGO Movie, which we've since seen twice already, because LEGO LEGO LEGO. Also LEGO. ALL IS LEGO. NONSTOP LEGO-Y LEGOSITY UP IN THIS LEGOERY. I don't want to spoil The LEGO Movie for the three of you who haven't been dragged there repeatedly by your offspring — kicking and screaming the whole way I AM SURE, just like you HAD to buy the "Everything is AWESOME!!!" song on iTunes before the end credits were over, a regrettable decision that has led to many a living-room dance party and the most persistent earworm problem you've had... Read more →

On Being a Busy Adult With Many Important Things To Do 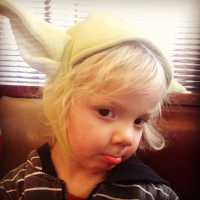 Did I ever tell you the story about the first time I met the director of my kids' preschool? I'm sure I did, but since I don't feel like opening another browser tab and tracking the entry down (SUCH WORK. MUCH EXERTION. WOW.), Imma just retype it, rerun style. I brought Ezra in to meet his teacher and had Ike with me, and after Ezra ping-ponged around the classroom like a meth-addled hamster, we met the director out in the hallway. I introduced her to a sleeping Very Much Baby Ike and she immediately made the connection to South Park, and then immediately got an OH SHIT look on her face, because...well, that was neither very Montessori nor Responsible Adult In Charge Of A Preschool of her, now was it? So of course, I loved her immediately. But from afar, in secret, because I didn't want to weird her out with my typical HI HI HI I'M A HUMAN CAPS LOCK thing of coming on too strong with anyone I think might want to be my friend. Plus, she didn't have any kids, so what the hell would we talk about? What life is like when you don't get peed... Read more → 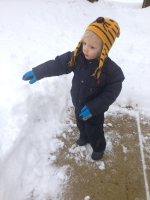 As of this morning, Ike's snowpants still had the tags attached. Even though they are snowpants that I myself did not even buy, but were handed down unworn from my nephew several years ago, and were originally intended for Ezra. I'm happy to say those snowpants finally got put to some good, heavy-duty use. This was Ike's first "real" time out playing in "real" snow. As in, snow that's more than a heavy dusting, and not half-melted by the time we got our collective acts together to get out in it. I think he's napped though every other play-in-the-snow opportunity this winter. This time, though. 15 inches! Enough to just open the front door and toss him into the nearest drift. It's safe to say he's a fan. Ezra, on the other hand, originally spent less time out in the snow than I spent getting him dressed for the snow, once he realized that his dad had every intention of retaliating his snowball-throwing. NOT COOL, DAD. He stomped back in and stripped down in a huff, though I was able to tempt him back out with this jaunty little guy: Ezra selected his carrot nose and hat, and named him... Read more →

The Stuff in the Space Between

Throughout all the hours with bouncy-voiced strangers, the weekly treks to various therapies, the years of classroom pull-outs and special accommodations, Noah never asked us why. Not surprising at first, of course, since the majority of our early efforts centered around his reluctance to talk much at all. And even though he's never been the most flexible child, there was still always that element of understanding that We Took Him Places Sometimes, And So He Was At That Place, Okay, Cool. Most of the places we took him were pretty fun, anyway, and full of grown-ups who played games with him the whole time. Best not to question it. But now, the Matrix is glitching. School is not fun. School is hard. School is hard for him, in a way it doesn't seem to be for the other kids. The other kids, whom he still doesn't understand how to be friends with, or why he should even want to be friends with them, especially since they don't understand why it's so hard for him to stay calm and still at school, seem to have it easier. And now he wants to know why. And he doesn't just want to know... Read more → 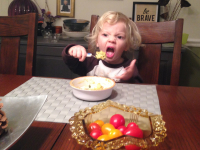 Oh oh oh! AND THEN! Jason left for a short business trip yesterday, right after I got back from my suuuuuper-relaxing dental appointment and a milk/eggs/cereal run, because I know how to Treat Mah Self. And I do mean short. As in, he's already on his way home now. Less than 30 hours of solo parenting. Way less once you factor in 1) sleep and 2) the fact that I mostly hid from my children all afternoon yesterday. I put Ike down for a nap, deposited every blinky-gaming-type phone/tablet/screen we own on the coffee table for the older two, then barricaded myself in my office and tried to get work done. Nobody was to bother me unless they were bleeding. Profusely. Y'all know where the band-aids are, work it out. (AWKWARD RECIPE SEGUE LIKE A BOSS) Even dinner was leftovers, for God's sake — I made some rice and nuked up bowls of our Surprising Recipe Home Run Success of the Month, aka a curried lentil and swiss chard stew with chickpeas, aka one of those ideas you get that flies in the face of all good sense and logic and totally works out anyway. My kids — a couple... Read more →

All This Plus the Cat Just Barfed On the Bed 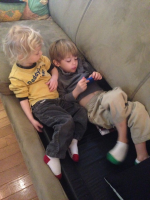 Schools are closed. There is supposedly ice out there. (I SEE NO ICE. I SEE ONLY RAIN, SLUSH AND SADNESS.) I have no milk or eggs. Children devoured all the bananas and the final bag of cereal that was supposedly "family sized" in one sitting. (NOT SIZED FOR FAMILIES MADE UP OF THREE HOLLOW CARB-HAPPY HYENAS.) I have two conference calls, 12 marketing campaign messages and a project proposal to write, plus a dentist appointment. (AND THAT'S ALL BEFORE NOON.) I don't know why I started framing this entry like this, with the whining followed by the yelling. (BUT NOW I FEEL COMPELLED TO CONTINUE.) This is clearly going to be a super productive day for all of us. (OH HEY WONDERING WHERE OUR COUCH CUSHIONS ARE? IN THE WASH. BECAUSE NEWLY POTTY-TRAINED TODDLERS ARE THE WORST. THE GROSSEST AND THE WORST.) Read more → We're having a bit of a Star Trek renaissance over here lately — Noah cycles through his geeky pursuits with a singular focus on one thing at a time, so it's Star Trek's turn once again to be the all-consuming obsession du jour. (Until The Lego Movie opens this weekend and destroys everything and anything else in its unstoppable merchandising path, that is.) It's mostly due to our decision (translation: Jason's decision. EVERYBODY BLAME JASON!) to let them watch Star Trek Into Darkness. Noah is really the only one who actually watched — and I stepped in with some selective fast-forwarding, because it is apparently my job to be the PG-13 wet blanket about father/son fandom bonding — while Ike and Ezra were mostly unable to follow the plot and spent most of the movie with Ikea baskets on their heads, running full force into the wall. (Though Ezra WAS really, reeeeeeally excited about the Captain Kirk chair he built out of throw pillows.) (The next day he added a safety bar/dinner tray.) ANYWAY. Noah had some problems following the plot as well, what with the new movies doing things all off-canon and lens flare-y, and especially since we (JASON.... Read more →