It's Not a Toy, It's Mommy's Highly Sophisticated Interlocking Brick System

Even though we agreed on a no-gifts sort of Valentine's Day this year, I can't say I was all that surprised at the sight of a large box wrapped in bright pink paper on our bed. Jason stood nearby, shrugging sheepishly. He never sticks with gift-related plans. 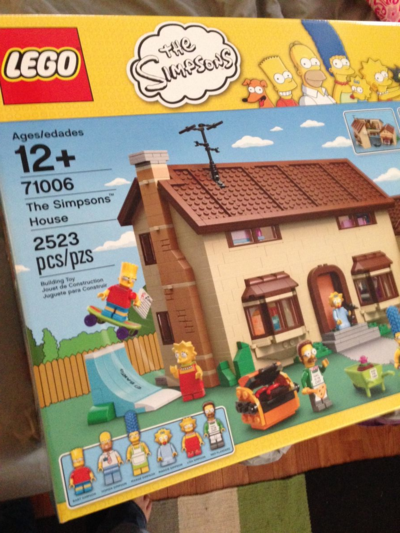 And not just any LEGO, but ages 12 and up LEGO. Boom chicka wow, baby.

I had a serious geek-out moment over this set a couple weeks ago, when I saw it fully assembled at a LEGO Store, where we were killing some time while waiting for the next showing of The LEGO Movie, which we've since seen twice already, because LEGO LEGO LEGO. Also LEGO. ALL IS LEGO. NONSTOP LEGO-Y LEGOSITY UP IN THIS LEGOERY.

I don't want to spoil The LEGO Movie for the three of you who haven't been dragged there repeatedly by your offspring — kicking and screaming the whole way I AM SURE, just like you HAD to buy the "Everything is AWESOME!!!" song on iTunes before the end credits were over, a regrettable decision that has led to many a living-room dance party and the most persistent earworm problem you've had since Call Me Maybe — but let's just say that attempting to assemble an "adult" set of LEGO around here has kiiiiind of transformed me into a certain character from that movie, a character who eventually learns an Important Life Lesson about creativity and childhood and all that jazz.

I am currently the "before" version of that character, because oh my holy hell, knock it the fuck off and stop MESSING WITH MY STUFF, KIDS. 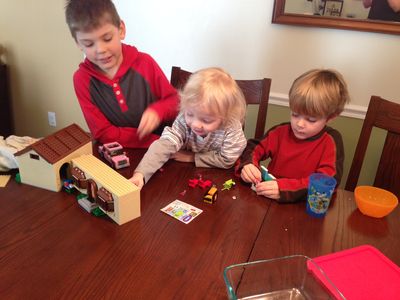 None of my children have ever watched a single episode of The Simpsons. They have no idea who these characters are or why the details on this set are so funny to me. Ezra calls them The Zin Zins, while Noah keeps asking why Homer's face has chocolate on it and why Marge's hair is made out of blueberries. And yet they are obsessed with this set and my building progress.

(I started Sunday evening and should finish it up tonight, and Noah has assured me that my pace and skills are at acceptable levels, though he doesn't understand why I don't just stay up all night to finish it off, as "No Bedtime" is my right as a grown-up.) 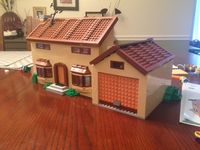 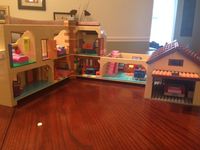 I let them play with the finished portions while I build, so it has the thin veneer of being an activity we do "together," but then I eye them with wild-eyed paranoia and suspicion and take constant stock of all the tiny pieces. WHERE'S HOMER'S SUITCASE? WHERE'S THE SECOND HOT DOG FOR THE GRILL? IS THE INANIMATE CARBON ROD STILL IN THE CAR TRUNK?

I told Noah he could watch The Simpsons when he was 10 years old, maybe. This has clued him in that the show is for adults, but judging from his play with the LEGO characters he obviously has no idea why and has simply gone with "non-stop gratuitous violence."  Basically everybody fights and battles each other all the time, with poor Ned Flanders standing in as a criminal mastermind and lots of PEW PEW PEW KUNG FU KICKS YOU'RE DEAD NOW. Then aliens hatch out of the blueberries in Marge's hair. 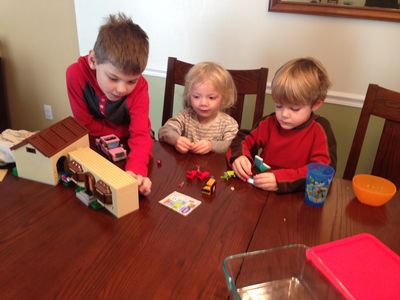 I've told them that this set will move to a high shelf in my office once it's completed, to be taken down and played with while supervised, and only if you ask nicely. I feel like a huge jerk, but I've already spent three evenings on this thing, meticulously placing alternating plastic floor tiles across several rooms and damaging all my fingernails while trying to pull two beige bricks apart because I was supposed to use two slightly different beige bricks in that particular spot.

I don't think I'm quite the absolute worst, however. I did let them pitch in and help me build along the way, and I have never complained about the frequent, repeated repairs to the roof I've had to make thanks to them.

Also, Noah wants me to point out that he built the toilet. 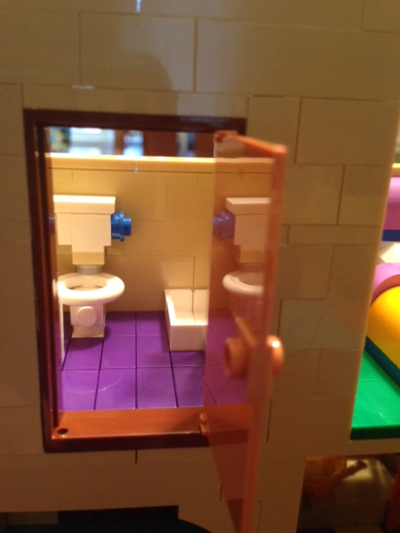 And he did a really good job. It's a great-looking toilet.

(Assembling the teeny tiny shower stall and related plumbing fixtures, on the other hand, baffled me for a solid 10 minutes, so. Yeah.)

We have Frozen fever over here... but damn, that lego set looks awesome

I think you've just solved my What Do I Get the Hubs for Our 12th Anniversary Next Month conundrum I was having.

That is just one giant brick of awesomeness right there and as one mom over run by Legos to another - you do NOT have to share your special adult Legos! That's excellent parenting in the form of teaching kids to respect boundaries and other people's stuff. Right? (See Also "No, you can't have Mommy's special juice.") Also, now I know what I want for my birthday.

I am genuinely jealous!

We had a Millennium Falcon that was disassembled for reassembly fun and then MIXED IN THE BIG BOX OF LEGO. We will never see that thing again. You stick that baby on a HIGH shelf, honey! BTW, now that all of my kids are old enough for Simpsons, how old for South Park? High school, or college?

Is that blue toilet paper?

I am so jealous too! When we went to see the Lego Movie, and I saw the Milhouse Lego figure, I immediately went home and googled "Simpsons Legos" and found this and squealed. It's on my wish list now!

It's always been really interesting to me that your boys are super into Star Wars and Harry Potter. I let my 3 and 7-year old kids watch a decent amount of inappropriate shows: Futurama, Justice League, King of the Hill. The older one's first two-syllable word was "Simpsons" and she had a Simpsons-themed 3rd birthday party at her own request. But I feel like Star Wars and Harry Potter is above their level. At least they're cultivating quite the "crap"-based vocabulary! Buying this set for my husband's upcoming birthday!!

Get some Kragle, quick! Before they destroy it!

I think I learned the wrong lesson at The Lego Movie.

My husband got me a Lego Creator set last year for Valentine's Day, and I damn near cried, I was so touched (he LISTENED TO ME!). Now I have four sets, with another on my wish list, and they are kept on a high shelf, and my toddler knows that they are Mama's and that the Duplo are his, and he can only see them while under supervision. Nuthin' wrong with that. Assemble it on a tray so you can stash the whole thing up high while you take breaks to like, eat and pee and work and stuff. BTW, do you have the Brick Separator? It's awesome. Also, have to profess my love for Veronica Mars a day late (Backer! Woot!); now I just hope I can see the movie in the theater. Congrats on the new mom friend! Worth solid gold.

My kids learned the words to "Spider Pig, Spider Pig," when the feature film came out--their first Simpsons exposure. They were what, 4 and 7? 5 and 8? Good luck w/holding the line, Mom, I was made of jelly!! #momfail

Love! We are LEGO crazy over here as well, but we are not convinced that our 3 & 5 year olds will sit through it. They WANT to! Our adult LEGO Is also the millennium falcon, but it is off limits for disassembly...the minifigures that go with it on the other hand...

It turns out grownup Legos are A Certified Thing. No, really. Do a news search on "AFOL" (adult fan of lego). You're in the vanguard of fashion yet again, Amy.

Ugh, I am the only one who hated the Lego Movie?
It was too sensory-overload for me though my 7 year-old LOVED it.
On a 1-10 scale he gave it one million!

On that note...do you play The Simpsons Tapped Out game??? I'm obsessed! Kudos to Jason on the awesome gift! :)

I will be showing this to my husband in hopes that he will take the hint and finally buy me the Lord of the Rings Helms Deep Lego set I've been lobbying for since they came out :)

Love this so much. Was just thinking the other day that "Legos for Moms" = untapped market. I was surprised to learn how very much I enjoy doing Lego time with my 6 year old. Unlike the rest of the activities in my life ... It is linear! There are clear instructions! There is a start & finish! All good stuff.

You mean there's a way to get the Frozen soundtrack out of my head!? I'll be seeing the Lego movie this weekend. My husband bought me a Lord of the Rings Lego set (Helm's Deep, Hilary, it ROCKS!) for my daughter and me to put together. After Aragorn's hair hit the floor for the fifth time and Sting nearly was lost, my daughter lost her spot on my lap to help build and then got so bored by my endless rules of playing with Mumma's toys it became a Mumma-only project. Mumma doesn't share toys! We can be huge jerks together, Amy.

If Leggo starts doing a series of "adult" show sets then I am all in. I would love a Walking Dead set!

No kidding on that song being a freaking ear worm. And now, thank you, it's in my head again!

Oh, and I second making sure you have one of those orange brick separator tools. Totally win.

It makes me feel good that another grown up likes to built Legos as much as me!!! I mention in a party how obsess I get over my boys Legos and the other moms made feel all "crazy women over here " ... Made my day!!!

You have Lego? Grown-up Lego?

I WANT SOME, TOO!

I'm Australian and there is nothing like that here. No fair. I want to play with lego and i turn 31 this year and don't have kids to buy it for.

that man of your is mighty fine. talk about the perfect gift for you. he's definitely a keeper.

I have grown-up Lego and the kids are only allowed to play with it as a very special treat, carefully supervised, etc etc. BECAUSE IT IS MINE. I was never allowed to have Lego as a kid and now that I'm a grown-up I'm pretty protective of it.

I did come home from the Lego Movie feeling horribly guilty about it, though.

And here I thought my "Cloud Cuckoo Palace" was the bomb. I did feel guilty for not letting my boys assist, but, well, it's my Uni-Kitty! Now, I just want The Sea Cow! EVERYTHING IS AWESOME!

OK. I can't possibly be the only one who saw that Lego movie and thought Noah became an actor (in an awesome dark curly wig) and I somehow missed it on your blog??? Because seriously. As soon as that kid came on the screen I wanted to whip out my phone and IMDB to see if it was him!