Home Archives About Subscribe Advice Smackdown Tip Jar
Adventures in Cloth Diapering, Part Whatever: THE FINAL CHAPTER
All This Plus the Cat Just Barfed On the Bed

We're having a bit of a Star Trek renaissance over here lately — Noah cycles through his geeky pursuits with a singular focus on one thing at a time, so it's Star Trek's turn once again to be the all-consuming obsession du jour. (Until The Lego Movie opens this weekend and destroys everything and anything else in its unstoppable merchandising path, that is.) 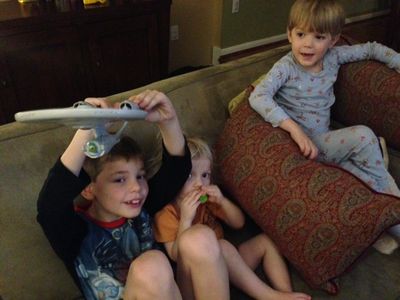 It's mostly due to our decision (translation: Jason's decision. EVERYBODY BLAME JASON!) to let them watch Star Trek Into Darkness. Noah is really the only one who actually watched — and I stepped in with some selective fast-forwarding, because it is apparently my job to be the PG-13 wet blanket about father/son fandom bonding — while Ike and Ezra were mostly unable to follow the plot and spent most of the movie with Ikea baskets on their heads, running full force into the wall. 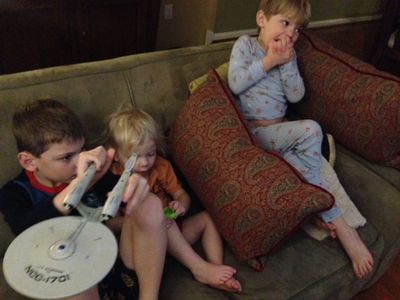 (Though Ezra WAS really, reeeeeeally excited about the Captain Kirk chair he built out of throw pillows.) 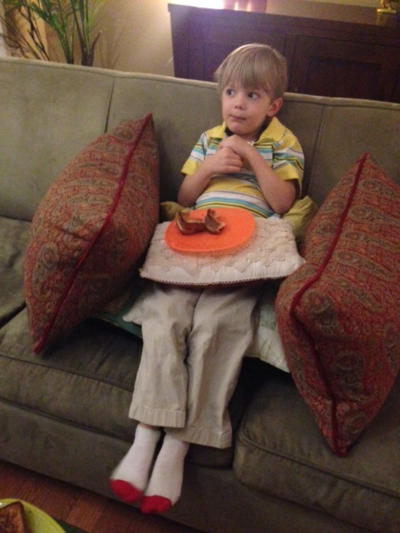 (The next day he added a safety bar/dinner tray.)

ANYWAY. Noah had some problems following the plot as well, what with the new movies doing things all off-canon and lens flare-y, and especially since we (JASON. THIS IS ALL JASON.) had earlier let him watch the original Wrath of Khan (JASON YOU BETTER FAST-FORWARD THAT BUG/EAR PART SO HELP ME GOD.) and the original Khan episode from the original series, in that order.

Noah was thoroughly confused by All the Khans and the age jumps and got very upset at the idea of there being "different" Enterprises. I worried that all this Star Trek was just too much for him, since for Noah, confusion/frustration can very quickly devolve into anxiety.

So Jason attempted to explain the concept of time travel and alternate timelines and universes via this incredibly detailed chart of every Star Trek movie and...I don't know. Other Star Trekkie things. 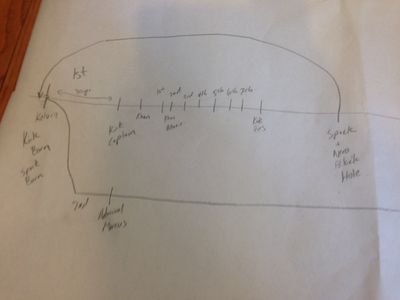 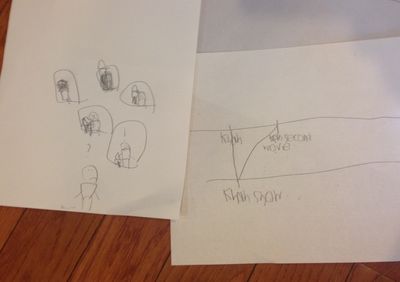 Noah later drew a simplified one to explain it all to Ezra. I was impressed until Jason (JASONNNNNN!) was all, "Yeah, except he's kind of wrong, because he has the original Khan show on the new timeline and the new Khan movie on the blah blah de blah nerd neckbeard talkyspeak blah."

(I'm sorry. I was raised on Star Wars. I was brought up right.)

Jason's already itching to move on to The Next Generation. Noah's already completely left me behind in the copious amounts of trivia he's absorbed and I'm thoroughly unable to answer his most basic questions, since I know like, character names and the Borg and all the captains ranked by hotness. He's asking deep philosophical questions about the ethics of planetary exploration and what the seventh button on the left does to the shuttlecraft's power coupling. 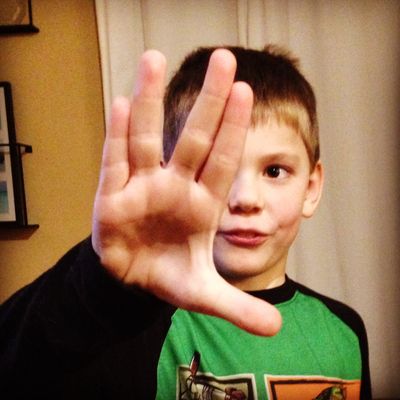 "Okay," he says. "Dad knows everything about Star Trek. Someday I'll know everything too."

Yummmmmy Khan - Benedict Cumberbatch!!!! Drool! He is so unbelievably FINE in STID, even more than in Sherlock! We all love the new Star Treks with all our nerdy hearts at my house! Although, with 4 sons, I'm the only one drooling over Mr. Cumberbatch. I think they are all tired of my over-the-top inexplicable crush. =)

PS If you haven't watched it yet, Sherlock is fantastic TV! Only 9 (long) episodes and the first 6 are available on Netflix. Not for little kids, though!

That's some good parenting right there.

Star wars here- so nothing to add in that nerdy regard- just wanted to say Noah looks so grown up and so handsome with the shorter hair-he is morphing into your husband!

It's good to have a goal, Noah!

Did threy not see Ninjago's triumphant return to teevee last week? You simply cannot keep a good Lego Ninja down.

Wait. What kind of camera trickery is this? In the picture of Ez in his captain's chair, he is clearly sitting on top of someone else. I buy that it's him from the pillow up -- but whose legs are attached to him?? Those giant legs are wayyy too long for him!

Again I say..I heart the Noah.

I'm with Nancy - Ezra has grown some loooooong legs. As for Star Trek, well when I was Ezra's age I went around holding down one eyebrow so I could arch one like Spock. Rock on with y'alls bad selfs! Peace, live long and prosper!

I feel your pain. My husband is currently forcing me to watch Enterprise, which is the armpit/crotch of the Star Trek universe.

I beg to differ... I was the one who was brought up right. With Little House on the Prairie. Geeks. ;)

I would take Star Trek over princess crap any day. My 4 year old has never even seen a Disney movie, so how does she know about princesses? HOW?!

We were a multilingual household - Star Trek, Star Wars, Disney, and Mutual of Omaha's Wild Kingdom.
We've done TNG with our girls .

(We're raising our son in an inter-nerd home, too. While I respect my husband's insistence that he be introduced to the way of the Jedi, my main concern will always be his understanding of all things Trek. Particularly how to do the Spock thing with his hands.)

So now you need to share your rankings of the captains by hotness!

We are also raising our kid in a star trek heavy home...when my daughter sees the priceline commercials with 'cap kik' she always yells to tell me they are on.