On Being a Busy Adult With Many Important Things To Do

Did I ever tell you the story about the first time I met the director of my kids' preschool? I'm sure I did, but since I don't feel like opening another browser tab and tracking the entry down (SUCH WORK. MUCH EXERTION. WOW.), Imma just retype it, rerun style.

I brought Ezra in to meet his teacher and had Ike with me, and after Ezra ping-ponged around the classroom like a meth-addled hamster, we met the director out in the hallway. I introduced her to a sleeping Very Much Baby Ike and she immediately made the connection to South Park, and then immediately got an OH SHIT look on her face, because...well, that was neither very Montessori nor Responsible Adult In Charge Of A Preschool of her, now was it?

So of course, I loved her immediately. But from afar, in secret, because I didn't want to weird her out with my typical HI HI HI I'M A HUMAN CAPS LOCK thing of coming on too strong with anyone I think might want to be my friend.

Plus, she didn't have any kids, so what the hell would we talk about? What life is like when you don't get peed on all the time? All the movies she's seen in the theater that I hope check out on cable in like three years?

That was — oh my God, the sands through the hourglass, you guys — three years ago. She has a kid now, a boy, and it turns out we managed to get a LOT of conversation traction out of South Park and Ike's Yoda costume and then Ike's Doc Brown costume. It turned out she was the one responsible for this, as she later requested that next year we all dress as something Game of Thrones related. I told her we'd come as the Red Wedding. And instead of being horrified at that macabre idea, she finally suggested that we, you know, hang out sometime.

Long story short, that's how I recently made a new friend.

Long story short AGAIN, that's why I recently ended up getting knocked over on my ass by a milk-stained IKEA umbrella that fell out of my car and popped open when it hit the ground, smacking me in the face because I was also on the ground, having just extricated the back of my coat from my minivan's sliding door, after five frantic minutes of waving my arms around in vain like a zombie from The Walking Dead, because those precious Cards had fallen off the passenger seat when I opened the door and blown under the car, just out of my reach. Because my coat. Was stuck. And the umbrella was there and milk-stained because Ike had dropped a milk jug from McDonald's (WHAT. JUDGE. WHO CARES. NUGGETS.) on the floor and onto all the crap we keep there (shopping bags, hoodies that don't fit anyone anymore, IKEA umbrellas). I'd grabbed it all to bring inside (because umbrellas shouldn't get wet? unsure of thought process here), then tossed it precariously on the passenger seat once the Cards fell out in a panic. But then it all fell out on me once I retrieved the Cards, which are totally a Proper Noun, Shut Up.

So of course I had to immediately email her and tell her what her gift had led to — me, on the ground outside my house, covered in detrius while triumphantly holding up a print-out of a Netflix-based marketing stunt, while my toddler watched idly by on the sidewalk, eating fries. She was like, that sounds about right, also we should all get a babysitter for when the Veronica Mars movie comes out.

Long story short AGAIN AGAIN, this is why you should buy your South-Park-named offspring a Yoda hat. It's like a Bat Signal for people who Get You. 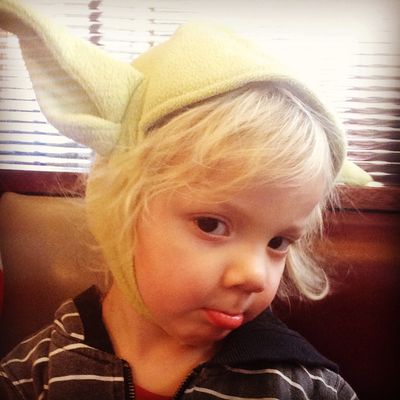 hahahahaha! I love it. It's funny you mention nuggets because I just bought my 19-month-old his first Happy Meal yesterday and was kinda torn between feeling like "Oh man, shitty mother" and proud I could pass this love of all things McDonalds processed crap down to him. And for the record, I would totally be your friend.

Dude, I may not need a babysitter, but I am driving from Kentucky to Missouri to see the Veronica Mars movie! Huge fan, have the t-shirt. LoVe 4ever!

I would totally cut a b*tch for judging a mom buying nuggets for boy children. They don't know.
Also, it's OK if you get them the apple slices and they eat at least half of one.

That is just so freaking awesome!

No judging here on the fries, especially when they'll eat veggies! That you make!

Where can I get some friends like that? Because I just downloaded those cards and OMFG I wish I had someone to play with.

So, without fail, Veronica Mars The Movie isn't being shown in Kentucky. Jerks!! I'm driving to you. Can we all hire one sitter??

Forget the concert...just play cards Against Humanity...and make your own cards because you can't make that shit up.

Excuse me, there are House of Cards Against Humanity??? *jaw drop*

Just finished Season 2 this afternoon, and, oh, that would be amazing right about now.

This may be my favorite thing you've ever written. I would totally be your friend too.

And they're not playing the Veronica Mars movie ANYWHERE near me. So sad.

I love meeting awesome people and then over the course of years convincing them that they want to be friends with me...
I really thought that at 33 I would be less socially awkward than in middle school.

VERONICA MARS IS HAVING A MOVIE?! Have I been living under a rock? (Yes. Most definitely.)

My son's new school principal made a Seinfeld reference during one of our meetings and I almost asked her to be my best friend.

Great post & pic! thanks for the smile. I'm not sure why but it reminded me of an almost 20 year story. My 4-5 year old niece getting into my car "Aunt Barb, why do you have a burger in your back seat?"

Hah! One time my children insisted on sitting on the sidewalk outside the preschool (the preschool where half the graduates end up going to a Waldorf school) to finish their happy meals... Was mortified but I just tell myself I'm providing a public service by lowering the bar for the other moms.

Also just wanted to thank you for your last post on Noah. The comments are closed but I was away for a few weeks so just saw it. My daughter's been diagnosed with ADHD and the first thing I did was start going back and looking at some of your older posts over the years. You've given me much hope, information, and laughter! Just wanted you to know you've helped another family by sharing. Many, many thanks.

Also, I'm so impressed you've made a new friend! It's hard for me at this age, I'm jealous, she sounds awesome!

Does she know you have a blog?

What A cute kid! i love the pic

I live in MoCo too and I've always wondered how I would react if I happened to meet you in public. I'm sure it would involve a jittery,way-too-excited HEY hiii I read yer blog and I too love laughter and jokes LET'S BE FRIENNNNNDS! I'll try to tone it down.