Oh, so remember when I was all, "I totally potty trained the baby!" and gave away a bunch of diapers and was basically an insufferable smug asshole for like, 48 hours about it?

It turns out that what I thought was our "breakthrough moment" was kind of a false alarm. We were close, but not really there yet. The Braxton-Hicks of potty training, as it were. Ike decided that having accidents at school were, on second thought, not such a big deal at all. Neither were accidents at home. Our clever little prompt/refrain of "clean and dry" quickly lost all sense and meaning, as he would happily chirp this at me WHILE ACTIVELY PEEING HIS PANTS.

Three weeks of this. Three solid weeks of zero success, endless loads of laundry, much crippling doubt in our decision to ever undertake this stupid training business in the first place, because that child was having none. Of. It.

(I'm sorry, Future Ike, for documenting this in such detail but YOU NEED TO KNOW. YOUR STUBBORN STREAK HAS LED YOU TO MUCH RIDICULOUSNESS IN THE PAST. PERHAPS YOU ARE BEING RIDICULOUS ABOUT SOMETHING RIGHT NOW. HMMMM. THINK ABOUT IT.)

We stuck with it, obviously. Life blurred into an endless series of 20-minute increments in between taking him to the toilet, where he would sit and stare us, like "Annnnd?" On his teachers' advice, we refused to change his clothes immediately after an accident. ("Clean and dry!" he'd parrot back, while waddling around the house soaking wet.) I bought him another toy — a giant awesome plush Wreck-it Ralph

— but stuck it on top of our highest kitchen cabinet and drew up a star chart. He needed five stars to earn Ralph, and he'd lose a star for every accident.

A modest goal, I thought. And yet poor Ralph languished on top of that cabinet for many days.

And then last Saturday, out of the damn blue, while I was upstairs waging the similarly futile battle of Keeping My Damn House Somewhat Clean, Ike walked himself into the downstairs bathroom and just...used the bathroom. All unprompted, unsupervised, like it was no big deal at all. On the one hand, I nearly passed out from shock. On the other hand, I KNEW IT I KNEW IT HE TOTALLY KNEW WHAT TO DO THIS WHOLE TIME OH MY GOD WHYYYYYYY ARE YOU SO STUBBBBBBBORN?

He earned Ralph by bedtime, and then there was no looking back. He conquered the public restroom hurdle the very next day. Accident free ever since. A mild stomach bug didn't even break his stride. I guess he just needed to prove a point to us about something, for awhile there.

(But no, I'm not giving away any more diapers just yet. He's tricked me into hitting the publish button on potty training once before. I'm onto you, kid.)

(But apparently not onto him enough to just keep my damn mouth shut. Hmm.)

Ugh. There is way too much urine-related imagery in this post. Let's get clean and dry with some completely unrelated photos. Reader/friend and fellow blogger/zombie nerd Erin sent the boys a Star Trek quilt (!!) for their many play picnic adventures: 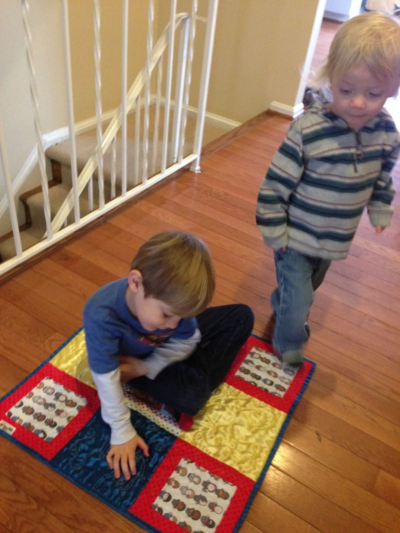 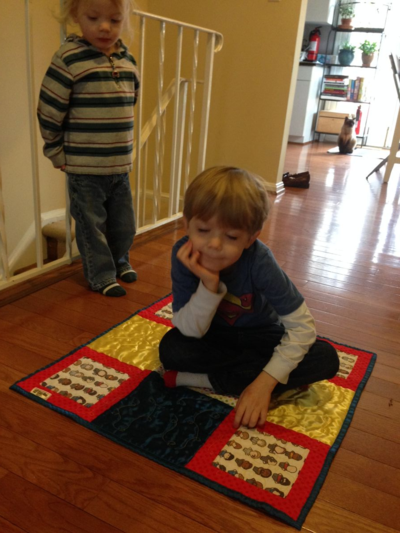 And of course Ezra immediately decided to cross the streams and repurpose it as a cape. 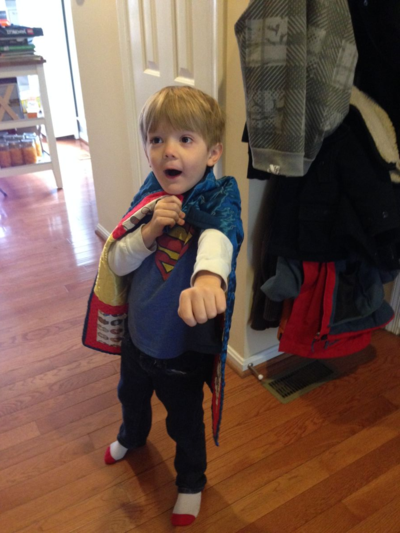 I am happy to report that nobody — human or otherwise — has peed on it. Yet. As far as I know.

I know people will judge me...but when I was raising my kids, we spanked. Hand on well-padded butt. That aside, my son was 3 years and 5 months and still in diapers. GAHHHH! I had tried every method, buying books about new methods, listening to everyone's stories, and still he would go hide behind a door, squat down, fill his diaper, and then bring me a clean one and ask me to change him.

Finally, I put a jar of penny candy on top of the fridge and explained to him that every time he used the potty, he got a piece of candy. Every time he used his diaper, he got a spanking. He looked at my face seriously while I was explaining, and then pulled down the front of his diaper, exposed his penis, and peed all over my feet.

I warmed his bottom, and he used the potty from then on. Never another wet or dirty diaper.

You do what you have to do.

Our younger daughter is not quite 2, so we're not at the potty training stage yet.

However, let me share a story. The Frozen soundtrack has been on about 24/7 since Thanksgiving. Apparently, my computer engineer of a husband was singing "Let it Go" under his breath, and his co-worker asked, "What is that? Some kind of potty training song?"

I will never think about that song the same way again.

That "clean and dry" bit is the funniest thing I have read in a month. I sobbed with laughter. Sobbed!

Just last night I got my ALMOST FIVE year old to poop in the toilet. Absolutely *nothing* had worked up until then when we told him that all screens were off until he did the deed. Ten minutes later annnnd done!

He knew exactly what he was doing. Little stinkers.

Oh, stubborn toddler boys. We're about to launch into toilet training our younger son and I dread it so. He's the sweetest of chubby cheeked love monkeys about 90% of the time, and the most stubborn, subversive, imp of mischief the other 10%. He's also 35 pounds and 42 inches at 25 months ( ! ), and trying to win a battle with him is like trying to wrestle the world's heaviest bowling ball.
I may wait until he's 10.

My kids were potty trained so late I was worried it would negatively impact their dating prospects.

When my brother was a wee (haha) one, he refused to use the "potty." It wasn't until my mom said you can't move up to the next preschool class if you are still wearing diapers. His response? "Okay!" He never wore another diaper! My mom was shocked...he had known how all along!

While I don't (yet) have kids, my dog was the same way. Way too stubborn to actually go outside and off the deck. For a few months when there was bad weather he would 'forget' to go to door when he wanted out and decide behind the couch was the best place to poop. Love your blog, so funny!

If Ike is anything like I was, I know exactly what he was doing. He had to make sure you knew it was HIS decision. He wasn't doing it because you wanted him to, but because HE decided to. (And yes, I got in trouble quite a bit as a child :-P)

I can't help but think this is my future. My daughter is has had her own mind from the start...

The quilt/cape is totally getting peed on today. You wrote about it! That is all.

Ah potty training! Here's another tip, if you want him to go and 'try' before you leave the house, make a deal, he has to sit on the potty and sing his ABCs. Or you can (that way you can go slower). If you get to the letter P and he has t peed yet, then he can get up. If he's anything like my daughter, he'll pee, but he won't learn his alphabet past P for a while.