Day of the Duplo 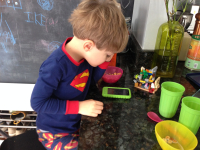 Schools canceled. Snow day number 4,239. (Approximately. I've lost track.) I'd say we're officially out of ideas around here, but that would imply that we ever had any ideas in the first place. We've built a lot of pilow forts and LEGO, bothered the neighbor kids and been bothered right back, and the house is covered with a fine dusting of dried-out Play Doh bits. Yes, we've played in the snow, read some books and colored a lot of pictures, but mostly — if I'm being honest here — their time gets spent around the kitchen counter, wearing pajamas and eating an endless, absent-minded breakfast for HOURS AND HOURS, while the sounds of discordant cartoons and games bleat out from various screens. GOOD MORNING EZRA. CAN YOU LOOK HERE? NO? HELLO? HOW YOU DOING, IKE? IKE? IKE? *MUFFLED ANGRY BIRDS THEME SONG* Are their brains melting? Probably. But mostly I need to get them to stop eating all the cereal. We're going through a box and a half a day, plus countless eggs, waffles and pancakes. I cut up an entire watermelon last night and it was already gone by the time I got downstairs to make coffee. So this... Read more →

YOU HAD ONE JOB. OKAY, MAYBE THREE.

I left for California on Thursday, by the way, although it hardly seems worth mentioning, since I'm back already. I spent about 36 hours in San Diego; it rained for approximately 34 of them; I left my hotel room maybe three whole times. One of those times was to speak to a room of about 50 pregnant or breastfeeding moms about the current state of mommyblogging, during which I am sure I came across as some kind of dinosaur, smacking my gums together while talking about Teh Olde Days, back before ads or sponsored posts or Twitter or Instagram or Amazon drones or whatnot. IN MY DAY, WE DIDN'T EVEN CALL THEM BLOGS. WE WROTE IN OUR ONLINE JOURNALS. SOMETIMES WE POSTED WISH LISTS AND SENT EACH OTHER BOOKS. BOOKS THAT WERE MADE OF PAPER, FOR CHRIST'S SAKE. About 15 minutes before I was scheduled to speak, I got a text from Jason: shit Noah had a half day This was...not news to me. This was...not supposed to be news to Jason, either, as we'd had several discussions about the day's logistics before I left. I texted back. Yes? Why? There was no response, which was not exactly reassuring, especially... Read more →