Ike is eating Second Breakfast, while also preparing for Elevensies. So far he's eaten two blueberry waffles, three bowls of cereal, two oranges, seven strawberries, one piece of turkey bacon, two cups of milk and remains extremely displeased at my refusal of his request for chicken nuggets. I can literally hear him outgrowing his clothing as we speak.

Noah and Ezra are both in my bed, literally fighting like two pigs under a blanket. There's a lot of thrashing and screaming.

What there is NOT, at least, is a lot of strep throat, despite my Instagrammed claims to the contrary. Turns out that I am a big fat lying liar, and should be banned from the Internet for my crimes.

Yesterday, Ezra woke up complaining of a stomachache. And a fingerache. And a general all-over kind of ache. He insisted his throat felt fine, but still refused to eat anything for breakfast. He looked pale and glassy-eyed, and it was pretty much a dead ringer for Noah's first day of strep, right before the fever started. After resting his head on the counter for awhile, he wandered upstairs and put himself to bed. He was sound asleep within minutes. 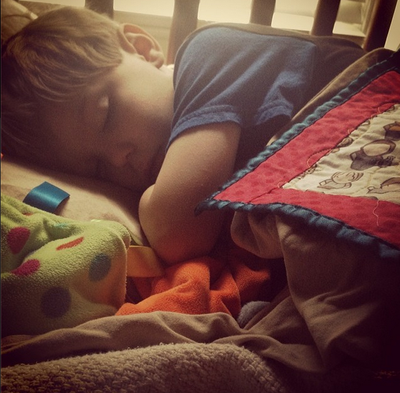 So...strep, right? About five days after Noah's symptoms started? Basically complaining of the exact same vague variety of things? Refusing to eat, voluntarily sleeping? I don't even need to WebMD any of that shit. Look who's a big hot shot strep expert over here, all of a sudden!

I figured I'd let him take a nap and then we'd go to urgent care for a prescription, as he'd surely start running a fever soon and compaining about his throat.

He woke up a couple hours later and was still not running a fever. Despite his insistence that his throat didn't hurt, I aimed a flashlight at the back of his throat and saw nothing but a perfectly healthy uvula. But he was still white as a sheet and complaining of a stomachache. He refused an offer of pizza for lunch AND THEN HE WENT BACK TO BED.

So on the one hand, it felt maybe a little rash to drag him somewhere for a strep test while we were obviously missing every major symptom of strep. But clearly this was...something? An extra slow-moving strain that would SURELY manifest at some point, so wouldn't it be best to be proactive and get him on the antibiotic ASAP so he'd only miss one day of school instead of two, and spare him an extra night of suffering? And with snow in the forecast again, who knows if the pediatrician's office will even open on time tomorrow.

(Take that last paragraph and repeat it 300 dozen times, and now you have an accurate picture of every single circular conversation Jason and I had yesterday. We were like the seagulls in Finding Nemo. Strep? Not strep? Strep. Strep? Streppy strep strep?)

I was hovering over Ezra's bed, trying to recheck his perfect temperature for the millionth time, when he suddenly sat up, and — after looking at me with a vaguely concerned face — casually and daintily vomited on his comforter.

"I threw up," he observed, very matter-of-factly.

AND THEN HE WAS FINE. THE END.

(No. Seriously. He jumped out of bed and went to go play. He did not barf again and ate a huge dinner and two helpings of dessert. He is now ice-skating down the hallway in his socks and Dr. Suess pajamas. Once again, I have been outsmarted by my children and reminded that I know nothing about anything.)

*And once again, I have probably surely jinxed myself here.

Uhm...throwing up can be a symptom of strep. Not that he has strep, of course. Just...so you know.

Yep, random pukes like that are a hallmark of strep in the younger set. They often don't have a sore throat at all.

2nd what "Jess" said. My kids have had step many, many times and each time the symptoms manifest differently. Sometimes classic as you described with Noah. Sometimes not. When my son says his ears hurt, I know a strep test is on the horizon. Once, my daughter seemed to fully recovered from her "illness" when we got the call that she did indeed have strep. She was outside playing basketball with a friend when the doctor's office called. Oops. Also, they've both had it many times without a fever. Just say in' ...

In hindsight, I am sure we all wish we had paid the extra fee and bought that child raising manual when they were born. Sure would make stuff like this easier. Strep. Is not easy.

We are on our 5th case of strep this school year with my daughter. Puking has been part of the symptoms every time, but so has a fever, headache, and sore throat. I am to the point where if the neighbors think their kid has strep, they bring them to me to look at their tonsils. My daughter gets it really bad, so bad that the white takes over at least half of her tonsil. We have an appointment next week with the ear, nose and throat doctor to talk about tonsil removement. and she is only 5.

Ugh! My daughter has had all of those random symptoms including throwing up for the first time last night. Guess it's time to head to the doctor for a strep test!

The puking can absolutely be a strep symptom - but maybe not. At our school, there is a strep version going around that has no sore throat but extreme nausea and dizziness. And there's a stomach bug that is puking and quick recovery, like Ezra's. So really, it could go either way.

My son has had the stomach bug - puking, no other symptoms, quick recovery, 3 times now. My daughter got it once. My water bill will be astronomical this quarter!

We are in Arlington VA and my 5 year old daughter had the same thing on Saturday. She woke up a bit listless and threw up 2 hours later, then felt fine for the rest of the day (except some mild queasiness after we reintroduced solid foods). She has never thrown up JUST ONE TIME before. I was ready with a bucket all day, sure that if I let sown my guard for a bit we'd have barf all over, but NO. We hit the vomit jackpot, woot!

Hate to say this but I agree with the other posters that it could still be strep. My son had strep last year and the only symptom he had was a slightly sore-ish throat and general bla for one day (no fever ever) and the next day was fine. I found out he had strep when I got strep a week later and took him to the dr. just to be sure. Kids, they like to fool you.

I'm a nurse practitioner in a pediatric clinic and the last three cases of strep that I had did not present with the usual swollen tonsils/discharge. One kid didn't even have a high fever, he was bouncing around, happy. I just happen to stick a swab in the kids throat and tested for strep and it was positive. But keep in mind I'm on the opposite coast, here in sunny southern California (sorry), so my patients may be quite different from Noah and Ezra. In December/Jan we had a lot more stomach flu but it seems to have died down in the last month. But just to be safe, get a strep test. :)Good luck!

That's the one we use at our clinic - and I believe it's also the one that is provided to us by the state for our Medi-Cal patients, so it should be pretty accurate. It's really easy to use!! Just take the swab and rub on kiddo's tonsils and then follow the instructions like a mad scientist :)Results take 5 minutes. According to the package insert, results are about 85-96% accurate when compared to actually culturing the swab and seeing specimen grow.

My daughter had strep one time and was acting totally fine, but randomly mentioned that her neck hurt. When I looked, it looked like she had a golf ball implanted in her neck. The swollen lymph node was the only symptom, and the doctors were shocked when the strep test came back positive.

My kid had a case of strep last year, and I'm still having random full-blown strep panic attacks. One where I actually spliced two kids' symptoms together to make a strep call ("HE had a fever last week and HE woke up with a belly ache") only to take my belly ache kid to the doctor, where he was promptly examined and diagnosed with constipation. $150. Not two weeks later, same child woke up with a sore throat, headache and fever. A wiser me called the Teledoc ($40) this time only to be told that, "It could be strep but sorry lady, WE CAN'T DO A THROAT SWAB OVER THE PHONE."

"This winter can go kick itself in the goddamn balls. " I'm sorry, this sentence is making me laugh way more than it should.

Stopping by to comment on the fact that you not only reference Tolkien but also Steel Magnolias in one post, seamlessly, and I declare you, officially, the best of everything. (Sorry about the sick kids too, but I'm a childless monster who has only myself to mis-diagnose, so I can't even imagine what sussing out some tiny person's symptoms meaannnnns! What does he have! Doctor? No doctor?).

Want to chime in and agree that this definitely could be strep.

And I know at least one previous commenter warned you about PANDAS (no--don't Google it) but over the next six weeks or so keep an eye out for seperation anxiety, random mood swings including rages &/or fears, age regression (like baby talk), increased "ADHD" symptoms, increased frequency of peeing, and refusal to eat or increased food pickiness. If you get some of those, then yeah. Then you should Google PANDAS, and find a PANDAS-knowlegeable doctor. Most aren't--it's a very rare thing, but ASD/ADHD kids do seem to be more susceptible. Early treatment is key.

Crossing fingers that you'll just think I'm a crazy paranoid commenter who was talking about some fuzzy panda bears--and that you never, never, never need this info.

My younger kid has done this several times. It's super weird. Upset stomach does go along with strep, but I think the fact that he felt better immediately means he had something he needed to get rid of. I hope he stays better!

I suspect we live nearish each other, and OMG OMG OMG I cannot even handle any more snow days. No more.

OHMYGOD commentors: not everything is strep or a deadly disease. Simmer down and let her raise her kids without panic.

I'm just here to say I am proud of myself for NOT going to WebMD for YEARS now. It's always the same. You type in tired and you've got Herpes. You type in headache and you have TB. And probably Herpes. And maybe strep. I'm glad Ezra has none of those.

And the first person I hear complain about summer after Snow Miser has butthumped us all winter is going to get my perfectly (in my mind) executed atomic knee drop a la Hacksaw Jim Duggan.

Sounds more like coincidental food poisoning than strep to me. When my kids do that slow build to the one and done vomit, I tend to think its food-related.
Either way, my pediatrician doesn't even give antibiotics for strep anymore. Crazy! I was appalled! But my kid did survive so I guess I won't sue (joke).
Kid sickness - whatever the type - is the WORST!