This is Where George Washington Lived. Lives? Okay, It's Complicated. 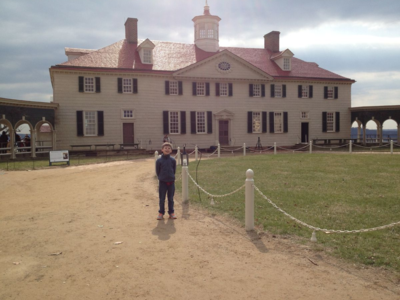 So. Noah's field trip to Mt. Vernon. Remember that? "Oh, advise me, Internets, for I am anticipating a great many problems and only have a week to work myself into a full-on hizzy about!"

I wasn't able to go after all — apparently Mt. Vernon is one of those field trips that EVERYBODY wants to chaperone, so they were flooded with volunteers. (As opposed to the boring old pumpkin patches or nature centers, which I get consistently roped into.) Thanks to Noah's strep-related absences, by the time we got our form in we were solidly in the way, way back of the line.

(I even wrote a note on our form to the effect of "you should mos def pick me because something something beneficial rigidity freak out speshul snowflake something." They did not pick me, but anyone not picked as chaperone was welcome to drive separately behind the buses and pay full price admission and and drive separately home and you know, on second thought? THAT SOUNDS LIKE EFFORT. NEVER MIND. YOU GUYS FIGURE IT OUT.)

So in the end, we sent him off blindly, with a half-hearted pep talk that George Washington probably wasn't going to be there, and if "he" was (unlikely, given all the first-hand reports we got that Mt. Vernon is a reenactment-free zone most of the time), it would be an actor. Also please don't pick fights with your friends about reincarnation and zombie presidents, cool?

Cool. Noah had a great time and we got nothing but reports of "awesome" behavior from his teacher. He stayed with the group, caused zero disruptions, and was incredibly enthusiastic and positive all day about everything they did and learned.

There was someone dressed up as a soldier? Or something? In a barn? I dunno. Noah decided that HE was George Washington, but in disguise, like a SPY, so he kept it a secret, choosing to sneak over and whisper to the (likely terribly confused) person that "I KNOW WHO YOU ARE. WE MET IN WILLIAMSBURG."

They also saw George Washington's grave, but that passed without incident as well. I suspect that Noah may have applied a little video-game respawn logic there, mixed with a little biblical "THE TOMB IS EMPTY HE IS RISEN" backstory, but...well, okay. We'll deduct some educational/historical accuracy points there, but the important thing is Noah had fun and his George Washington fanboy enthusiasm remains solidly in place.

(He's also decided that since neither Jason nor I got to chaperone, we all have to go back as a family this weekend. Or next weekend. Or all of the weekends. And we also have to go to Williamsburg for spring break because of other reasons that I'm not quite following. Nevertheless: NOAH LOGIC. DO NOT QUESTION HIM. HIS ARGUMENT IS AIR-TIGHT AND HE'S GOT THIS.)

I'm glad this worked out! I completely missed your earlier post on this, or I would have given you the name of one of the actors (not George Washington, though) who would have been happy to help. But you didn't need help! So anyway. George Washington leveled and everything is fine.

I am so very, very glad it all worked out. And I am getting a big, big kick about imagining the soldier hearing a child whisper to him, "I know who you are." So. Freaking. Awesome. I sort of hope he's in witness protection or has a sordid history he's trying to put behind him or something.

Mostly, though, I'm glad it was a good day for Noah and that he's still George Washington's biggest fan!

I'm loving Noah's choice of fandom because YAY history and not being a licensed, annoying cartoon character!

"I know who You are. We met in Williamsburg."

Love!! almost choked on my lunch at work!

Love those moments that you worked up to be so very big in your mind, only to have them play out in a non crisis best case scenerio fashion. Aaah motherhood. :)

I frigging love that kid.

So awesome when adapt overcomes inflexible. So glad that Noah adapted and overcame. Huzzah to progress says GW!

You know, Noah MIGHT be on to something...
In the new show Sleepy Hollow, George Washington died, but was resurrected a bit after (zombie Washington) and THEN once he really died, he was not buried at Mt. Vernon, but on some small island, which the inside looked like some Egyptian tomb, of course.