One Month From Three 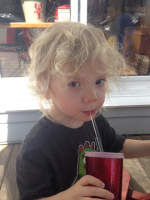 "Ike, do you want the rest of your milk?" "NO." "Really? No more milk?" "NO. NO MILK. I DON'T WANT MILK EITHER." *folds arms, stomps feet* "Okay then." *puts milk away* "NOOOO DON'T TAKE MY MILK." *hysterical crying* *** "Ike, do you want your toy back?" "NO." "Are you sure? Because once I start driving I can't give you the toy back." "NO. NO TOY. I DON'T WANT TOY EITHER." *folds arms, sticks out lower lip* "Okay then." *puts toy on passenger seat, starts driving* "NOOOOO GIVE MY TOY BACK." *woeful weeping* *** "Ike, do you want pizza for lunch?" "NO. NO PIZZA EITHER." "Grilled cheese?" "YES! GILLED CHEE GILLED CHEE! YES!" "Ah-ha! So you can still say that word!" *makes him a grilled cheese, hands him a grilled cheese* "WHERE MY PIZZA?" *despondent sobbing* *** In the morning: "NO UNNERWEAR EITHER. I BABY IKE I WEAR DIAPER." At naptime & bedtime: "NO DIAPER EITHER. I BIG IKE I WEAR UNNERWEAR." All the damn time: *frenzied shrieking because it's wrong. whatever it is, it's WRONG WRONG WRONG* *** Whenever I walk into a room, or pick him up from school, or sit down on the couch, or try to work... Read more →

The Ballad of Bloon & Bubby 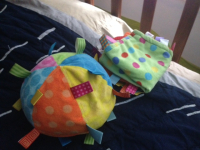 For as long as I can remember, Ezra's been super attached to three particular loveys: two small Taggies blankers and one Taggies ball. As a baby, he found the first blanket and his thumb around the same time, and the colorful, jangly ball attracted his attention not long after that. Both of them immediately became necessary for him to sleep on his own. He found the second blanket as a toddler — a second blanket I brilliantly thought to purchase as a back-up to the first blanket, but not-so-brilliantly neglected to find a good hiding place for. He spotted it in a drawer, and from that day forward, he demanded BOTH blankets and the ball at bedtime. Because he sucks his thumb whenever he holds any of them, however, we quickly instituted a rule that the blankies and ball live in his room, in his bed, and are not allowed to leave. He doesn't suck his thumb as much anymore, but he still sleeps with them, and every morning he makes his bed, folds his blankies and stacks them neatly, in their place of honor next to his ball and pillow. (Fun fact! One of the blankies is now an... Read more → 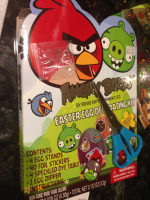 So here's what you missed, during the Great Blog Outage of a Few Days of 2014: Me as a real-time walking exhibit of Pinterest Fail, because I decided to get obsessive over Easter eggs for some reason. Easter is not my holiday jam. I always forget about it, and when it comes on the heels of a week-long break from school I'm generally just sort of over life in general. My own mom used to go All Out for Easter — baskets were like a mini-Christmas morning! there was a cake shaped like a bunny and a big fancy meal and candy freaking everywhere omg candy candy candy! — so I'm not sure what happened. I suck at it. (Maybe because my love of holidays now is firmly carb- and entree-driven and I'm just not really that into ham.) Before spring break, Ezra's preschool class dyed Easter eggs, once again reminding me that my kids' teachers have so much more energy and patience than I do, because I cannot even remember the last time we dyed eggs: I buy the plastic kind and fill 'em with whatever bagged candy is on sale. (Though to be fair, this is Ezra's teacher's... Read more →

Back! Back! The Blog is Back!

Is...this working? I think it's working. Poor little blog. Are you okay? So. Hi! Sorry about that. Starting last Friday, Typepad (my blogging service and host) was hit with a seemingly endless string of DDoS attacks that wiped out...well, everything. All Typepad blogs went poof, nothing would load and nobody could post. Typepad would get one part of the service back up and then another attack would come and knock it all back down again. Domain-mapped blogs like mine (amalah.com instead of amalah.typepad.com) were basically the last thing to get back online last night. In hindsight, I should have been much better and "out there" on all the other social media thingamaccounts, letting people know what was happening (I think some folks thought I'd been hacked or domain-ganked or maybe just bahbleeted the whole thing in an epic, mysterious flounce), but the truth is I just kept assuming everything would be fixed ANY MINUTE THERE. I'll just give them a couple more hours! I'll check back tomorrow morning! I didn't really have anything all that great to blog about today anyway! Man, The Simpsons Tapped Out Easter update sure is addictive, right? Tap tap tap tap tap tap tap tap... Read more →

Greetings from slightly-more-than-halfway-through Spring Break 2014, which shall forever be known as the time I decided it would be a good idea to go back to Colonial Williamsburg for a couple (non-sponsored, on our own dime) days. Despite what you may have read elsewhere, let me assure you that attendance levels at Colonial Williamsburg are JUST FINE, BORDERING ON BEYOND BONKERS right now. Since our last trip was solidly in the low season, we arrived with a false sense of confidence and at a distinct disadvantage to everyone else, who showed up with things like "plans" and "dinner reservations" and "the ability to actually look at and read the map, rather than just sort of walking to where you generally remembered things happening last time, even though everything was moved around to accommodate bigger crowds." (And on Tuesday, when it rained all day, you can add "ponchos" and "more than one goddamn umbrella" to that list.) (And on Wednesday, when the temperature dropped like, 40 degrees, add "coats for Mom and Dad, who both potentially caught their respective deaths.") We did arrive with an inordinate amount of attitude and sass, however. (The oversized hipster sunglasses are some conference swag Jason... Read more →

On No More Babies

It recently occurred to me — me, Queen of the Obvious, every bit as whipsmart as your average bowl of oatmeal — that I don't have any babies in my house. Nor do I have any imminently incoming babies. Ike will turn three on June 1st, just some 50-odd days from now. When Noah turned three, he was barely two weeks away from becoming a big brother. When Ezra turned three, he'd already been a big brother for over four months. There was always another pregnancy, another baby, to ease the transition of baby to toddler to boy. Despite Ike's insistance that we all still call him Baby Ike, he's all little boy now. His personality has exploded — all of a sudden he went from being a cute little mimicking thing to being himself. He has opinions and observations. He makes jokes and plays games. He's crazy for superheroes — he's firmly Team Marvel, by the way, so please purchase his underwear accordingly —and his favorite color is not just blue, but DARK blue. He sings and he dances, he thinks Happy Meals are the basically the greatest thing ever (whoops, my bad), and he never stops talking. Despite... Read more →

Kids Are Weird, But So Am I 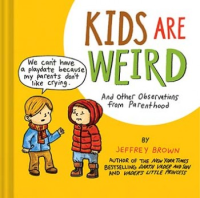 This post is sponsored by Chronicle Books. Here's a little bonus protip from me, professional blooper booger blogger, about the proper way to reply to a sponsored post proposal. When asked if I'd be interested in writing a post about Jeffrey Brown's Kids Are Weird, I had some kind of weird initial fangirl brain moment and without thinking, responded with an all caps "NO WAY!" Two minutes later I followed up with a clarification that I meant "NO WAY!" in like, an excited way? Like Elaine from Seinfeld screaming "GET OUT!" at people? I meant "yes, count me in" but for some reason decided to scream words that meant the exact opposite of that? Luckily, they were able to translate and understood that I would be thrilled to put my Clearly Excellent Writing Skills and Superior Way With Words to work on behalf of Kids Are Weird. We own a bunch of Brown's other books, for reasons that I'm sure will baffle and astound you: Darth Vader and Son, Vader's Little Princess and Star Wars Jedi Academy. (cough NERDS cough) I bought the last title for Noah in the San Diego airport after my recent trip there, and then worried... Read more →

The Haves & the Have-Nots 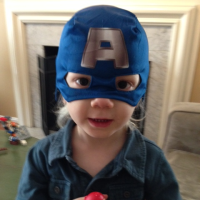 It took just a few seconds after waking up this morning to realize that the vague throat tickle I've been insisting for days is "just allergies" is...not, after all, but the inevitable great unfairness that is a Spring Cold. I caught it from Ike, because he insists on a lot of kisses, but instead of puckering up he sticks his bottom lip out really far and kind of licks your mouth with it. It's less gross than it sounds. But it is quite efficient at infecting you with whatever low level pestilence he's got going on. As usual, he's already over it. Which is good, since he clearly is a very busy individual with important places to be today. I reminded him that he doesn't eat lunch at school* but was informed that this isn't a lunchbox, it's his Work Box, like Daddy's. *I pick him up at noon, then bring him home for a lovingly prepared lunch that he never, ever eats. They serve morning snack at his school all-you-can-eat buffet style, and Ike** basically shuts it down every day. **I'd say that's why my 2-year-old only weighs six pounds less than my 5-year-old, but the 5-year-old eats just... Read more →

You Are The Lego Beneath My Wings

Prior to — oh, the EXACT MINUTE the end credits of The Lego Movie started to roll — Legos were pretty much Noah's exclusive domain. It's always been soothing for him, I think, to sit and tackle a big, complicated set, step by step. His visual-spatial skills are pretty amazing, and those Lego instruction books always managed to cut through his attention and focus issues. He enjoys building his "own" versions of things as well, and is thankfully pretty flexible and accepting of the fact that inevitably, most of his sets will break apart and eventually get completely assimilated into the Borg of his Lego bag. But there's always the Next Set He Wants, the bigger the better, so he can spend hours building it and perhaps gain a small sense of control in a world full of sensory chaos. Ezra, on the other hand, Did Not Get It. Any Of It. He WANTED to love Legos, you could tell. Noah loves Legos, Ezra loves Noah (like, to epic levels), and so Legos must be super amazingly cool and awesome. So he'd request Legos of his own, and would even forgo buying something I knew he REALLY wanted with his... Read more →