It took just a few seconds after waking up this morning to realize that the vague throat tickle I've been insisting for days is "just allergies" is...not, after all, but the inevitable great unfairness that is a Spring Cold.

I caught it from Ike, because he insists on a lot of kisses, but instead of puckering up he sticks his bottom lip out really far and kind of licks your mouth with it.

It's less gross than it sounds. But it is quite efficient at infecting you with whatever low level pestilence he's got going on. 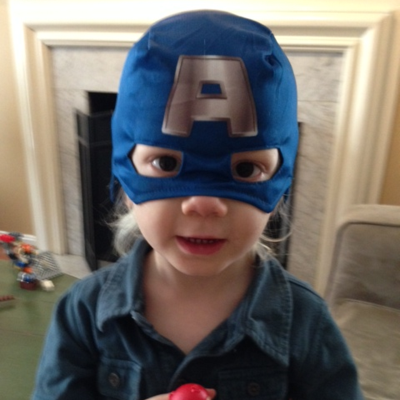 As usual, he's already over it. Which is good, since he clearly is a very busy individual with important places to be today. 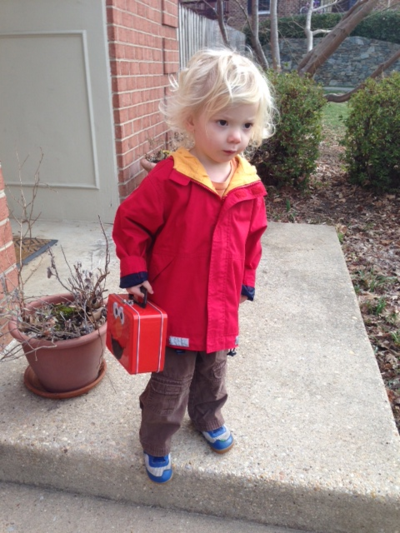 I reminded him that he doesn't eat lunch at school* but was informed that this isn't a lunchbox, it's his Work Box, like Daddy's.

*I pick him up at noon, then bring him home for a lovingly prepared lunch that he never, ever eats. They serve morning snack at his school all-you-can-eat buffet style, and Ike** basically shuts it down every day.

**I'd say that's why my 2-year-old only weighs six pounds less than my 5-year-old, but the 5-year-old eats just as much, if not more. He's just hollow and made of bird bones.

Anyway, upon closer inspection it turned out Ike's Work was a crayon, a necklace and a couple of Thomas trains. A busy and important day ahead of him, indeed. 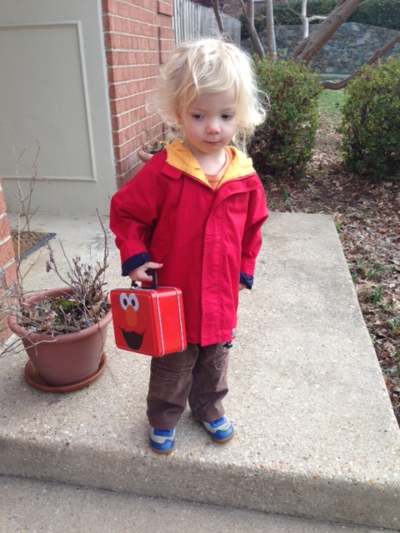 I Don't Know How He Does It, toddler edition.

STAHP WITH THE CUTENESS! *dies*

You're damn right it's important. Do you know how many times I have watched that video? I'M NOT GOING TO TELL YOU, AMY, GOD. And sometimes, only sometimes, I think Ike and 2 is some math on meth because gah BABY Ike.

Farrah Fawcett's hair has been reincarnated on your 2-year-old. Love.

Ahhh, the kisses. Evie pretty much bites my lip every single time. It's also less gross than it sounds, but it is every bit as painful as you would think. And yep, it does mean I get every cold she carries. WORTH IT.

That first picture is so adorable.

DAT HAIR. No wonder he knows he's got it going on. That video though. It is anti-birth control.

You mention Ike's Hairz a lot and I thought to myself, hm, don't know if I could let my sons hair grow that long... But today I saw a boy about 3yrs with this long mop of wispy blond hair and he was SO ADORABLE and I thought Oh! Ok! I get it now! :-)

It's kinda sad how much I love your kids! Too freaking cute

Your kids make my ovaries hurt! If my babies end up half as cute I'll be very happy!

Ike rocks! I especially love the little flourish at the end of the hair brushing!

My one year old (okay 11 months and 28 days) has been on the biggest kisses kick this last week. He's still gives the open mouth kind but I don't care and I thank him for every one he gives me. :) Also I'm not sure why but he tries to kiss my husband but ends up biting his nose lol.

The cuteness. It burns!

I love your blog, and your kids are freakishly cute. Ike's "work-box" made me laugh so hard, this was so funny. Thank you for your writing.

He knows his hairz are fabulous.

yeah my 5 year-old's Montessori teacher had to re-adjust snack time a few years back because someone *cough my child Cough* was essentially shutting it down daily too. Now it's a served affair (but they are there all day) - with embroidered napkins and electric candles naturally (got to love that Montessori!)

How can you not look at that photo of Ike, look at Jason and starting the procreation lecture?? OMG he is adorable. He has soulful eyes as well. Come on, have another....