Home Archives About Subscribe Advice Smackdown Tip Jar
On No More Babies
Back! Back! The Blog is Back!

Greetings from slightly-more-than-halfway-through Spring Break 2014, which shall forever be known as the time I decided it would be a good idea to go back to Colonial Williamsburg for a couple (non-sponsored, on our own dime) days. Despite what you may have read elsewhere, let me assure you that attendance levels at Colonial Williamsburg are JUST FINE, BORDERING ON BEYOND BONKERS right now.

Since our last trip was solidly in the low season, we arrived with a false sense of confidence and at a distinct disadvantage to everyone else, who showed up with things like "plans" and "dinner reservations" and "the ability to actually look at and read the map, rather than just sort of walking to where you generally remembered things happening last time, even though everything was moved around to accommodate bigger crowds."

(And on Tuesday, when it rained all day, you can add "ponchos" and "more than one goddamn umbrella" to that list.)

(And on Wednesday, when the temperature dropped like, 40 degrees, add "coats for Mom and Dad, who both potentially caught their respective deaths.")

We did arrive with an inordinate amount of attitude and sass, however. 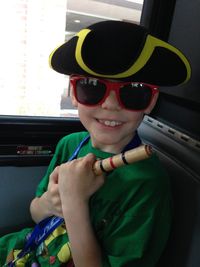 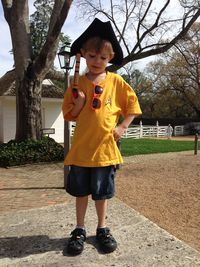 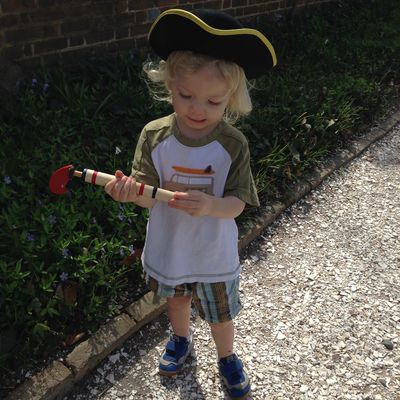 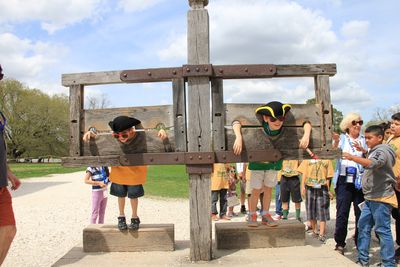 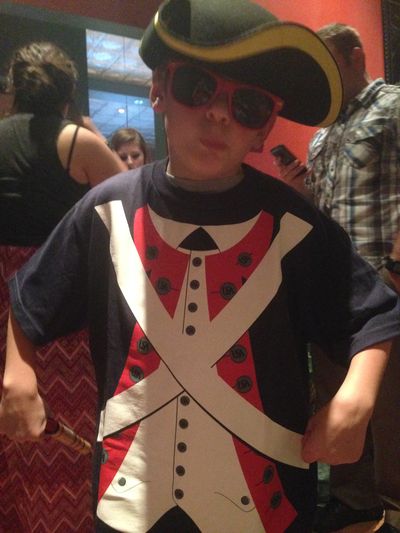 (The oversized hipster sunglasses are some conference swag Jason got for them, and perfectly authentic for the time period.)

We were originally supposed to leave on Monday, but then at the last minute decided to leave on Sunday to give us at least one day of non-crap weather. This obviously did not help our overall packing organization since it was mostly like, "GAAAHHH THROW STUFF IN SUITCASES WHO CARES GO GO GO." All I cared about was not forgetting Ezra's socks this time, since he still hasn't stopped talking about that, and packing 1,700 backup sets of underwear and pants for Ike, since oh God, nothing but far-flung public restrooms as far as the eye can see.

(He was fine. I really should have spent the mental energy of planning an appropriate backup wardrobe for myself. For our drive home yesterday I wore a pub-cheese-stained sweater and yoga pants.)

The highlight of the trip was again, Noah's ultimate hero, George Washington. Noah stalked him at every possible opportunity, and every sighting — planned or just random wandering-around luck — ellicited a Beatlemania-like reaction. 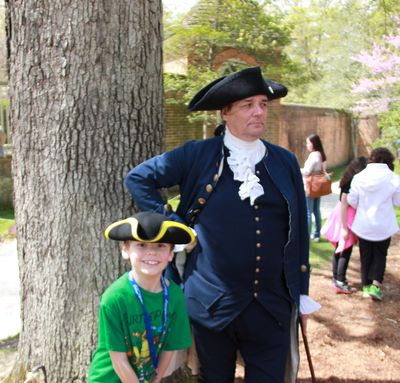 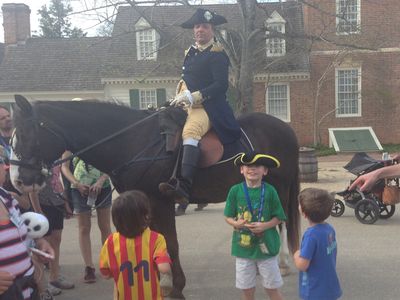 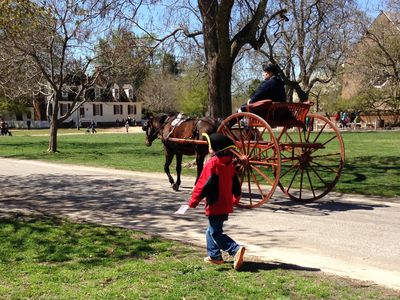 They were excellent pals by the end of the trip. George never failed to stop and ride over to Noah and patiently answer all his very important questions and comments, including "YOUR HORSE WAS WHITE LAST TIME WHAT'S UP WITH THAT", "LOOK AT MY SHOOTING SKILLS" (pops cork gun into air a dozen times), and "CAN I COME LIVE WITH YOU FOREVER?"

Colonial Williamsburg. Where history comes alive, just to totes be your new BFF.

Ike and Ezra also had a pretty good time. Ike wanted to see a horse; he saw a horse. He picked me several bouquets of dandelions and ate plenty of ice cream. Ezra saw a horse poop, fought imaginary bad guys in a hedge maze, and found a lake to throw rocks into. 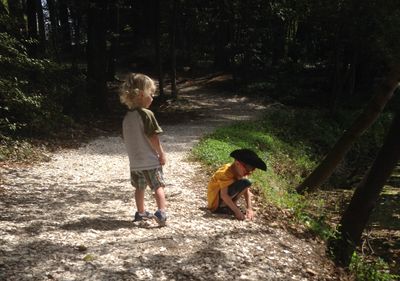 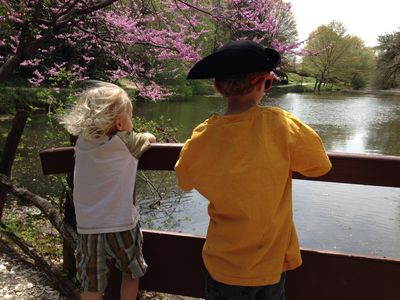 Of course, it wouldn't be a Storch family vacation without someone falling on their face and/or ass, and on this trip that honor went to poor, sleep-deprived Ike. We had one (1) classic skinned knee on the cobblestone, one (1) random sidewalk faceplant after tripping over his own feet, and one (1) facial collision with the corner of a bookshelf. 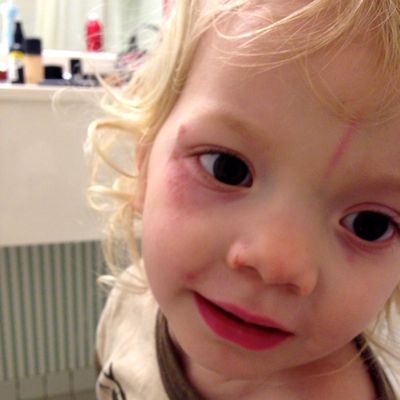 (An Ikea bookshelf, to be exact. At a very super aweome Lego-centric indoor play area that saved our Tuesday. But still. Ikea. Lego. Klutz-based injuries. These are the ever-circular themes of our lives.)

Now I have to figure out how to get back to work while all three of them are home and demanding Williamsburg-level entertainment. Would it kill me to throw together a daily fife and drums display at 5 p.m.? Fire off some muskets and cannons? God, Mom, you're so boring.

Poor Ike. But on a positive note, that would a great zombie make-up job. Too bad it's so far from Halloween.

Poor Ike. But on a positive note, that would a great zombie make-up job. Too bad it's so far from Halloween.

The fact that your kids <3 Williamsburg astounds me. I clearly remember HATING it when my Momm would drag us away from the awesome that is Busch Gardens. And now, as a Mom, I dream about tavern dinners. GIVE ME ALL YOU MEAT & POTATOES! (And Ale, always ale)

What the hell did you do to your kid! That's incredible, poor guy.

Noah's fanboy reaction to George Washington is adorable. Can I say that? Or is he too old for adorable? Either way, the smile on his face makes my heart happy. And, my vision is admittedly pretty poor, but does that George Washington look a bit like Bill Murray?

I just love that Washington is the same as last time. Right?

Seeing the kids having a blast is awesome.
When mine was little I had him draw me what we did and where we went after we got home and color it in.

I haven't been to Williamsburg in years, but I am going to plan a trip right now. I need those tri-corner hats on both my girls, stat.

Jay-zus, I hope the bookcase has a bruise or two to show for that disaster of a face. Man, I bet that hurt like H-E-double hockey sticks--tell him Aunt Lynda said he's so brave for making it out of Williamsburg intact despite Ikea's best efforts to the contrary.

In whatever words you think he'll understand...

I just love that your kids love Colonial Williamsburg. I haven't been there but I'm anxiously waiting for my kid to get a little older (2.5)... ah, hell, maybe we'll just go this year anyway. Living history FTW!

You are finally back! What happened to the past 2 days?!?!

YAY!!! You were released from Typepad prison!! Welcome back.