Halp I Can't Stop Eating All The Biscuits

Happy day after Mother's Day, y'all! I hope your Sunday morning celebrations were dispatched with ruthless efficiency. And maybe some extra butter on your toast.

My Mother's Day actually started on Saturday night, very late, at a very, very (veryveryvery) inconvenient moment when one of my children barged into our bedroom to find out if it was midnight yet, and thus, "time for Mother's Day hugs."

Me: NO IT IS NOT. DO NOT TURN ON THAT LIGHT DO NOT COME ANY CLOSER GO BACK TO BED.

I was much more welcoming of the hugs the next morning. We'd agreed on no gifts, but Jason made my personal brunch favorite of biscuits and sausage gravy, the leftovers I admit I have been completely powerless to resist today, hence the post title that doubled as an all-caps text message I sent to him just now.

One by one, the boys decided to join me for breakfast in bed, which was like inviting a litter of puppies into bed with you and scattering bacon-based treats amongst the covers. Everyone brought a bowl of Cheerios and a plate of waffles or biscuits and took turns opening and closing my Mother's Day card, which plays the Superman theme song. And opening. And closing. And opening. And then swapping bed/pillow positions while I rescued bowls and plates and biscuits. (Which I then ate.) 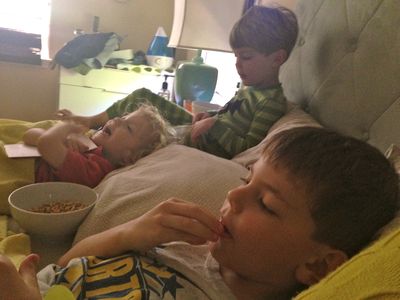 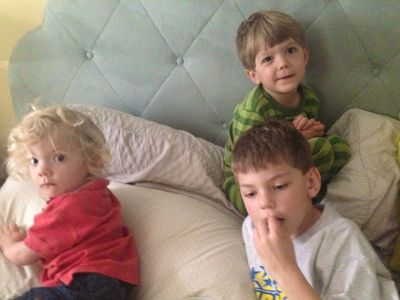 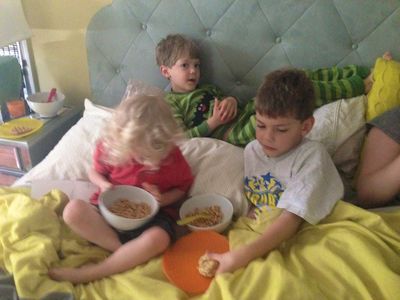 It was not relaxing, but it was wonderful.

Later, Ezra prepared a very special Mother's Day picnic on the living room floor. He poured me tea and arranged plastic sandwiches and pie, and we finished it off with smoothies. 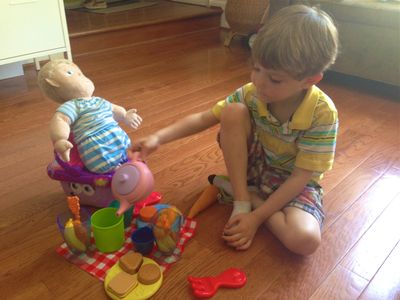 Mine was carrot and banana. His was pineapple and bread. On a nearby sidetable, he hung a handmade beaded necklace for me to take home as a party favor. It was only slightly less beautiful than the adoring look he had in his eyes the whole time. 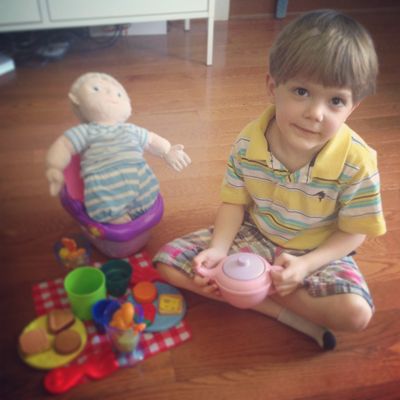 It was not luxurious. But it was wonderful.

I spent the rest of the day outside gardening with Jason, finally getting the last of the container crops planted. Tomatoes of all kinds, peas, onions, scallions, zucchini, yellow squash, cucumbers, peppers, strawberries, melons, herbs and probably a few other unlabeled things that will baffle us for awhile before producing whatever it is we forgot we planted in the first place.

I repotted flowers and pulled weeds and scooped up handful after handful of compost. I cut back everything that had died over the long winter and replaced it with greens and oranges and pinks.

The kids played nearby in the sprinkler, which I ran through occasionally as well, both to cool down and wash a coat of dirt off. It was not relaxing OR luxurious. But it was beyond wonderful. The perfect Mother's Day.

"It was not relaxing, but it was wonderful."

I think you've just summed up motherhood right there in one sentence.

Happy Mother's Day! I spent it with my daughters, my ex, and my mother in law. It was neither relaxing nor wonderful, but it was worth it.

I shoveled. Don't get me wrong, I had a great day with the kiddos, but there's a part of my brain that still objects to snow - shovelable amounts of very heavy wet snow - on Mother's Day.

I can't stop laughing at that last shot of Ike.

Re: container gardens. Do you have stink-bugs in your area? If so, how do you keep them off your plants, like the tomato plants? They pretty much single handedly massacred my tomato plants last year. :)

My favorite pictures this year are the early morning snuggled in bed pics. None of which are suitable for sharing, due to an - ahem- wardrobe malfunction, but damn if the love and happiness isn't shining through, and I will be treasuring them forever.

I got the same superman card!
I had to make breakfast for myself and daughter. I don't know if my husband realized it was Mother's Day until we were in church and Mother's Day blessings started. But at least he had prepared ahead of time = card!

Biscuits and Gravy is my favorite too! (On a side note I may now need to go to the store and buy sausage) It sounds like you had an awesome mothers day and OMG how freaking big is Noah?? I think it's the haircut but suddenly he looks like "grown up" more then a kid.

I think that Superman card must have been popular I got it too! (with the same result of having the kids play it over and over again for me) :)

Looks amazing. What sweet boys you have.

Oh, kids barging into bedrooms at inconvenient moments; the joy of motherhood.

Once, my then 4-year old who was supposedly napping on a Saturday afternoon yelled "Momma, are you okay??" up the stairs during an inadvertently noisy "naptime" with daddy. Gah!