I came here to post something happy and exciting and now I'm crying. Dang it, eyeballs!

Long story short, and let's just get the justified feelings of jelusbitchpants out of the way: We're going back to Jamaica next month. Back to Bluefields Bay Villas. We went there four years ago, had the most unbelievable time, I blogged about it, and afterwards a whole bunch of you guys also decided to go there (and were nice enough to mention that you found them through my blog).

I've stayed in touch with the owners off and on, and they've always been super-nice and open to the idea of us returning, but I always felt weird about specifically asking, like I was being grabby and inviting myself, until finally they called me and were like, "YO. STOP BEING A DORK. HOW'S THIS JUNE?"

So that happened, but that's not why I'm crying.

After we settled on dates and I booked our flight (full disclosure: Bluefields is covering the all-inclusive accommodations, we pay for our airfare, I receive no additional monetary compensation for posting, and everything I choose to post is my own and not being reviewed or influenced, yadda yadda), I asked the kids what they thought about going back to Jamaica.

Noah: JAMAICA? WE'RE GOING BACK TO JAMAICA? FINALLY! IT'S MY FAVORITE PLACE EVER!

(He's been begging to go for years. Ever since we got back, basically. And yes, he talks in caps lock just.like.that.)

Ezra: JAMAICA? JAMAICA! I'm not 100% sure I know what we're talking about because I was only 15 months old, but I am nonetheless VERY EXCITED ABOUT HOW EXCITED WE ALL ARE ABOUT THIS! 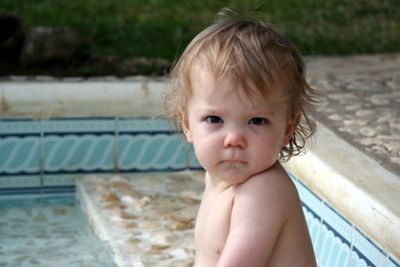 (He did weirdly follow-up with a question about fruit. Would there would be a lot of fruit? Which...yes. There WAS a lot of fruit, delicious fresh tropical fruit at every meal and snack, and Ezra probably ate four metric tons of it. He'd toddle into the villa's kitchen and beg for it, and everybody took to feeding him treats of fruit like a squishy little puppy. If he DOES have any vague memories of Jamaica, I guess it makes sense that they would all be fruit related.) 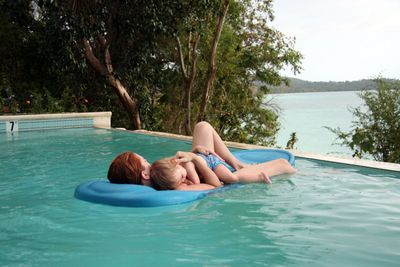 (Oh. And he's already told me he's packing his little chef costume because he wants to cook with the villa's personal chef. PREPARE YOURSELVES FOR THE ADORABLENESS.)

Ike: I wasn't born yet, idiots. But please tell me more about this fruit. It sounds FASCINATING.

Noah's memories are much more vivid, and that's how I got into this ugly-cry mess, because I went back into the archives to read about the things he remembers and look at the photos. And then I remembered what an amazing turning point that trip was for him. And me. Both of us.

We lost our Wizard of Oz DVD somewhere on the return flight home, but Noah still remembers pretending the paths around the property were the Yellow Brick Road, and that the gardens were the Emerald City. He remembers the pools and the small beach with its own beach toys and playing with the local children and the hammocks and how you're not supposed to throw toys out the wide open windows, EZRA. He remembers the nice man who climbed up the hill outside to retrieve the toys for us.

He remembers the calm ocean, with no waves.

He doesn't necessarily remember how scared he was of the calm ocean at first, and how we conquered those fears together. Or how he actively sought out the company of other children to play with, something we'd never witnessed before. How he talked more, laughed more. How his rigidity vanished and his imagination soared to new heights. 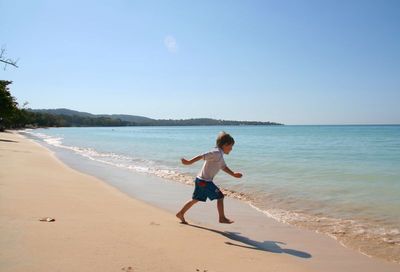 He doesn't remember that he came back and drew his very first original drawings of our house and the one in Jamaica. 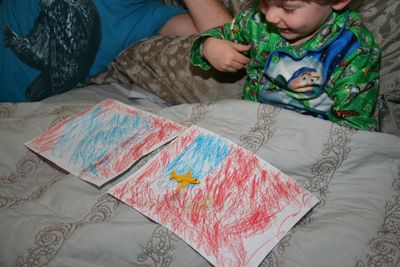 But I do. I still have them. I can't wait to see what souvenirs we bring back this time.

I so remember this trip.....because your cat scared the living daylights out of me!

Also, because the place looked amazing!

*sniffle* I remember reading about this like it was yesterday. I'm so glad you're going back! (airfaire for five? Aie!)

So exciting (and yes, a bit jealous)! But was Ezra really only 15 months old at the time? It really does seem like yesterday that I was reading about it.

I am so insanely jealous. My husband and I honeymooned at Bluefields Bay and we stayed in the Providence House (October 2013). It was the vacation of a lifetime. Give Maurice, Anna Kay and Sara a huge hug from me!

And please ask them to give away a vacation or two for the rest of us! lol.

Now I'm crying too. I hope you have sooooo much fun!

Who says Disney is where the magic is? Go go ahead and happy-ugly cry your heart out - it was an amazing step forward for y'all and what fun to be able to relive it with Ike!

I've been thinking that I want to come up with something special to do for my 40th birthday. I think I may have just found it.

1. I am so jealous! I remember reading about your trip and wishing I could go, too. I hope you all have a fantastic time.

2. It's been four years? Are you sure, like REALLY sure? Because I could have sworn I only read that post a few months ago.

Aww, I remember the pictures of your kids visiting the local school. So cute. Have a great time.

Four years? Wow! Hope you have a wonderful trip. Try the lionfish - have you had it? Those darned fish must be good for something.

I AM SO CONFUSED.

Have a great time, and, of course, TAKE ALL THE PICTURES.

OMG...this makes me realize how fast time flies and how long I have been reading your blog...I started reading this blog wayyyyyyy before your Jamaican trip. BTW still totally enjoy reading it. I found it through another blog I read from a Canadian blogger Maureen Holloway who thinks you are an amazing blogger. I have to agree. She also is an amazing blogger. Have a good trip.

Definitely still have bluefields bookmarked for vacations, I'm excited to see how it is once you go back! So much fun and also *sniff* the memories....misty water colored memories.

I went to Bluefields in October 2010 (with your Amalah discount code, I might add!). Woot! It was THE ABSOLUTE BEST. We started out in Cottonwood, but due to a broken pool situation, moved into the Hermitage after two days.
It was incredible, and we talk about going back someday with a group. It's oh so very $spendy$ though, so who knows.

I second 'Donna P's' rec'd above... the lionfish is delicious. They were just experimenting with catching and preparing it when we were there, and we had a special group meal, featuring it. Eat it to beat it!

Oh, I remember this trip and how amazing it was for your whole family, especially Noah. I hope it's even better for you this time.

And isn't this the trip you wore your red bikini for Jason? Girl, go for it!

I got a little choked up, too.

I remember crying when I read how you shouted about not being scared of the ocean, passing your bravery on to Noah. And now...sniffle...excuse me. I need to find some coffee.

I remember crying a lot at those posts. I am not revisiting it today, because I has things that must get done.
And of course Noah talks in all caps, he takes after his mother.

You made me cry at work! Again!!! I hope you guys have an AMAZING time and that it's just as special.

I remember! I remember that amazing story of how you went and threw sand at the ocean and yelled at it, to have ezra throw out all his fear and frustration and how much that helped.. I still tear up thinking of that because I think that was so AMAZING. You rock and you so deserve this trip together :-)

OMG. I've been reading this blog for over 4 years!
Have fun!

And now ... now I'm crying too! I am excited for what other doors Jamaica is going to open this time!!!

I'm so happy for you!

We went on a cruise a few years ago and we stopped in Jamaica and it was amazing. We always said we'd go back. I'll have to get out the Bluefields Villas; )

Uh, I am still jealous of your *first* vacation. One day. Oooone day.

Holy moly, that trip was one of the last times I read your blog on the regular because I went and had a kid (or three) of my own and had to cut my internet consumption way back to, like, the Smackdown, so yes, it's like yesterday. But glad your life is still amazing and amusing and I hope you have a wonderful time!