Today was the annual Mother's Day breakfast at Ezra's preschool. I realized that next year, I'll be attending it with Ike. But not with Ezra, ever again.

For September, he's offically enrolled in kindergarten at the public school, and he's very excited. He'll ride the bus with Noah and go to school with Noah and be a big kid like Noah. 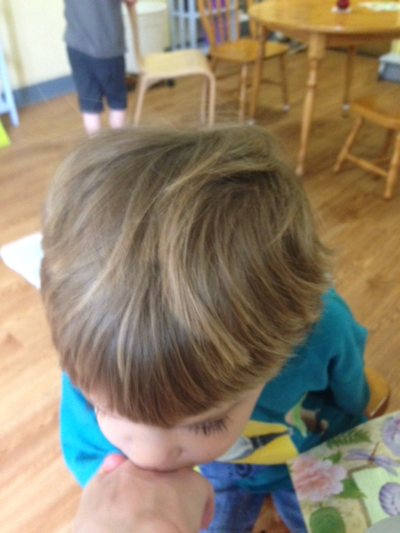 (And to kiss all the new ladiezz' hands, like a long-lashed, angel-faced BOSS.)

It'll be interesting to see how the transition from Montessori to traditional education goes (especially since our elementary school — while absolutely wonderful in so many ways — can sometimes feel like an overcrowded pressure cooker), but there's no denying that Montessori has been absolutely amazing for him. Every brochure-type promise of a confident, independent and thriving learner has been fulfilled, and then some. 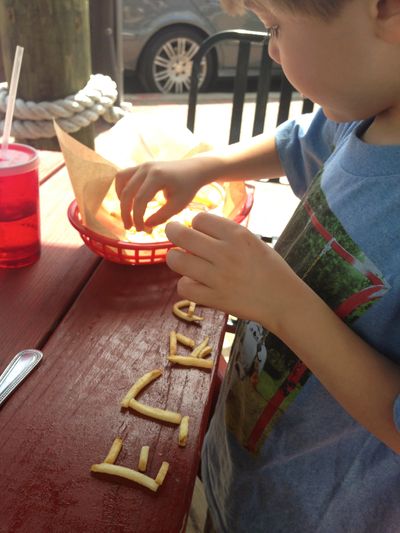 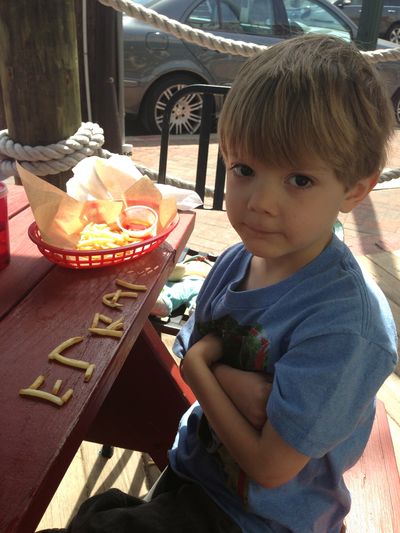 In addition to his name, he can also spell "MOM" and "IKE" and writes me daily notes that read "PIK SK I PP MZA TEE."

"That says I love you so much," he translates. "See the heart?"

(This is what Noah's teachers would describe as "risk-taking in expressive writing," which is something they are forever trying to encourage him to do more of — to just try, to make mistakes, instead of always worrying about being right.)

He also learned to write a few letters in cursive, and for some reason became so taken with the lowercase cursive e that he decided to add it to his name: E Z R A e. 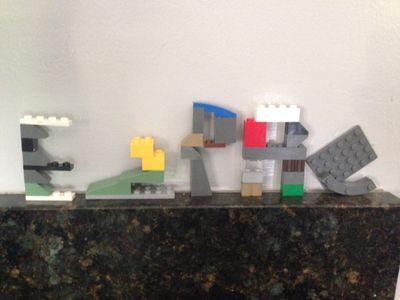 I get the feeling his public school teacher might not find this as charming and "whatever goes, maaan" as we do, so we've been trying to prepare him for saying goodbye to the cursive e in kindergarten. (I know they get kind of down on Montessori — we let the Early Intervention people scare us off from it with Noah's first year of preschool, which: Jesus Christ, HUGE MISTAKE — but honestly Ezra's academic and social skills are totally right where they're supposed to be, if not beyond. SO THERE.) We don't tell him that it's wrong, just that's it's...preschool. It's the preschool spelling. Kindergarten will be a little different. Not better, not more correct, just different. Cursive will come back later, and he'll already know it! Won't that be fun! 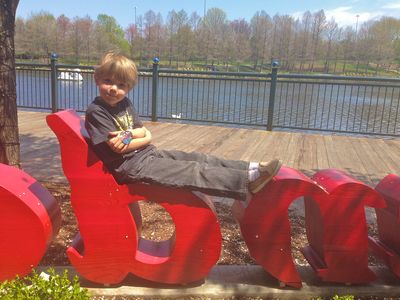 Must have been all the after-school yoga. 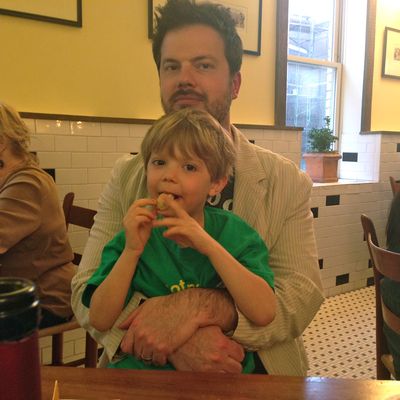 Or the fact that he's just still, you know... 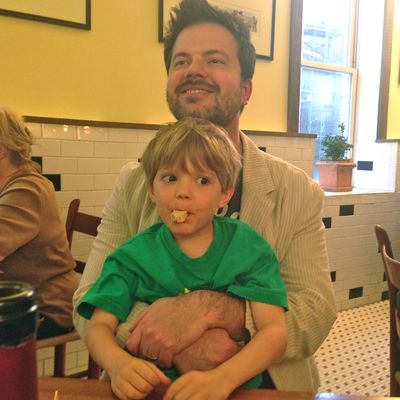 I love this post.
Interesting side note about cursive... when my kids were learning it (3rd grade?) there was discussion in our district about schools not teaching it at all anymore. Lost art, so many people type or text now instead, yadda yadda yadda... some days I wish our district would just worry more about teaching the teachers HOW to teach. Don't get me wrong, some of the teachers are WONDERFUL, but some of them are... NOT. Most are somewhere in between. =)

I'm attending my final (ever!) Mother's Day tea today. (spoiler alert - There will be tears) but my guy is heading to kindergarten in the fall too. So I'll raise a glass of juice in toast to all the amazing boys and girls getting ready to move on to the next exciting stage. LIKE A BOSS.

there was no mother's day tea at day care this year :(

I adored the LEGO. That was so awesome and so Ezra and you -should- be proud of your amazing child! Best of luck in kindergarten, Ezra!

You get to sit at tiny tables for Mother's Day breakfast? The tea at our Montessori was floor seating. Those of us who waited until 40 to have our kids are not amused! :)

Oh, and if that lower-case E is looking for work, I've got an opening at the end of ElliE that it might be interested in.

I try not to have favorites but I can't help it. Ezra is totally my favorite.

Somehow I didn't really realize that my oldest is the same age as your middle. To kindergarten they go! Now THAT makes me die a little. She will be five in less than a month. I can't take it.

I would let him write his name with the cursive e, no matter what kindergarten says. It's his name (and adorable, too).

My Jackson is my last baby... And goes to kindergarten in the fall. Like all I am sad he grows so quickly... But unlike others I am ecstatic he goes to kindergarten in September because he will be at the school I teach at! Where his brother will be in the fourth (how the heck did that happen??) grade! My youngest GOES to school and I am CLOSER to him! Backwards world!

Love the lego writing! I have 5 year old twins that are behind with their spoken language, but know how to write their names and many letters and numbers. They will also write "nonsense" and translate what it says. They are high risk-takers in expressive writing, yay! Love getting notes from them. :)

This reminds me of Harriet the Spy and her writing her name as Harriet M Welsch, even though she had no middle name. Why? Because she liked it that way. Go, Ezra! On a side note, yikes~are his legs really that long?!!

We're lucky enough to be able to send our kids to a public Montessori school through 8th grade, and it's so nice. Glad Ezra(e) had a good experience!

So I've never commented, always been a lurker (one who laughs outloud at most of your posts). But we are former DC people who live overseas now (Hi from India!). We are coming home this summer for our usual too-short visit with the grandparents but we are also taking a week to go to DC and visit all of our favorite places...like the one in your last two photos. 2 Amy's was one of the first places my husband took me on when we started dating and I just about went speechless with happiness eating there for the first time there so many years ago. After that, it was always one of our favorite date nights. Fitting perhaps that after our quick trip to DC, we're headed off to a new assignment in Italy. Anyways, sorry for being random but I love your blog under normal circumstances and tonight you just made me homesick in the most wonderful way. Thanks so much for always making me laugh and sometimes making me cry and happy mother's day!

In preschool, our daughter decided that she preferred to write her "J" facing the wrong direction. She's 7 now and still insists on writing it that way. Her teachers have been pretty cool about it. (and she does know it's technically not correct; that's just how she rolls)

Please update us on how the transition goes! My daughter is about Ezra's age but we're leaving her in her beloved Montessori school for K and putting her in our local (very good, magnet, but very overcrowded) school for 1st. We're not in your county but are nearby but eh...who knows. But we're a little nervous about how she'll transition.

I remember when Ezra was born (only from online, of course) and cannot believe he's going to kindergarten! How exciting. And how time flies.

My own "baby" will get her driver's license next month and her older brother just got home yesterday (on Mother's Day, yay!) after finishing his sophomore year in college.

The years have flown but I have loved every one!

BTW, the only reason I am on twitter is that I set up an account when Ike was being born. I had to be in an all-day seminar out of town for work and didn't want to miss the announcement of his arrival. It's surprising how easy it is to get attached to kids I've never met IRL!! Your family is beautiful.

My children attend a public Montessori school. it's odd in that the primary is AMI certified but the elementary is not. So my daughter left kindergarten writing in cursive to enter first grade were it was frowned upon (and cursive is no longer part of NYS curriculum sadly). She still makes a little tail on her a's :) Her current teacher finds it charming (she also sends her child to our school so she drinks the Montessori Kool-Aid!)
My youngest leaves primary this year. It's gut wrenching to think about. Not having that calm, beautiful classroom full of busy children to visit again :( I'm pretty sure my retirement job is going to be an aide in a Montessori primary classroom. I cannot imagine a better place to work