Noah's been sick since Saturday. Another round of strep, milder this time, but still. STILL.

When trying to decide what topic to write about yesterday, and ranking the thrilling options on a scale of "That'll Do, Pig" to "gurl no1 currr," I typed "sick" into my blog's search field, just to see. 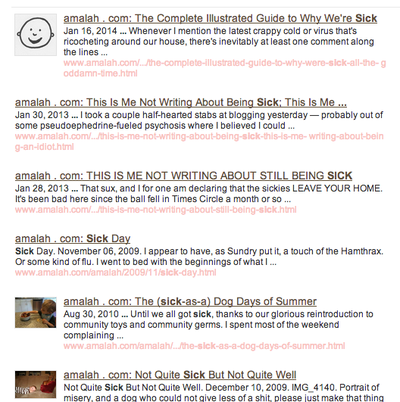 Over 700 results, 10 solid pages of posts, 10 posts to a page, and every single one another repetive riff on someone in the household being sick. Colds, fevers, stomach bugs, viruses, flus and infections of all colors and stripes. Quite a few (DOZENS) of them are basically me writing about how I can't write anything REAL that day, because SICK. (And then I immediately follow up that excuse with 1,500 words about being sick. I am a very predictable monkey.)

You know, just in case one day I want to look back and read my life story, I've got a comprehensive record of every single time someone threw up. So that's covered, at least.

Here, kids. I compiled and printed out some stories from your childhoods. Sorry about all the snot talk and diarrhea. I think some other stuff happened, but I forgot to write it down.

Speaking from experience — and thoroughly documented experience, at that! — I can say that Noah being sick is definitely the easiest of the sicks. He's independent, not whiny and fairly sensible. He'll accept bad-tasting medicine with grace and dignity, rather than with full-body thrashing and clenched teeth. "I need the Hospital Cup, Mom," he said yesterday. "I need to stay hydrated." Unlike Ike, he'll lie down and take a nap, instead of barrelling around the house in a fevered frenzy of destruction. Unlike Ezra, he'll decline solid foods in the wake of a stomach illness, instead of constantly sneaking snacks that he will promptly barf (result #103!! Whoooo!!!) up. I mean, Noah can blow his own nose now. What a milestone, what a world.

There is actually no excuse for me not writing and working at my full potential today, because the poor child has not demanded a thing from me, save for a sufficiently charged iPad and the warm, darkened inside of an Ikea futon slipcover. 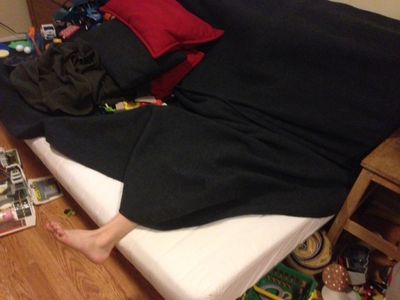 Poor guy. But at least you have a handy reference for his pediatrician and college admissions personnel...

You totally forgot my favourite word (that I learned from you) for it: (turbo) hork.

I love the giant boy-foot sticking out from the futon cover. Also - Wendy is spot on with turbo-hork...HA!

Our last round of sickness was the dreaded pink eye, which I really resented because it meant they didn't feel very sick at all and wanted to play non-stop while I was trying to squeeze in a few hours of work. Selfish jerks. I look forward to this more civilized sickness in, oh, three years!

I'm disappointed...I expected a bit more effort on the "yak" front from you. We need to support this under-rated word whenever we can.

I hope that Noah feels better.