Since We've Been Back

I still have not unpacked the boys' suitcase, even though everything inside it is clean and pressed and they are rapidly running out of underwear and pajamas. I don't even know why I'm procrastinating, other than: Wah. It's over. We're really back.

We celebrated Father's Day by throwing out everything in the fridge that had expired or molded over while we were away, which led us to the strategic decision that we should go out for brunch unless we wanted to starve. Then we took the boys to see How to Train Your Dragon 2, basing THAT strategic decision simply on the fact that 1) it was really hot outside, and 2) it had a high percentage score at Rotten Tomatoes. But while (SPOILER ALERT) it is an incredibly well-done sequel and an excellent fantasy epic on its own and all that, I probably should have researched the plot a little more, or at least Googled "DO THEY KILL A PARENT OFF IN THIS MOVIE Y/N."

Not that my kids seemed bothered by it in the slightest, just like they weren't particularly bothered by (MORE SPOILERS) both parents biting it 15 minutes into Frozen. Another movie, FUNNY STORY, I did zero research about and bought us all tickets based on the fact that 1) it was really cold outside, and 2) Rotten Tomatoes once again seemed to suggest I wouldn't want to stab myself in the face halfway through. (I'm looking at you, Cars 2, you goddamned abomination.)

I was under the vague impression that it was about a snowman, and for at least the first hour Noah kept asking "WHERE'S THE SNOOOOOOOWMAAAAN" every 30 seconds.

"Dude, I don't know," I whispered back. And then, to Jason, as it finally dawned on me by like the third song: "Oh my God, it's a princess movie. We brought them to a fucking princess movie."

I was mostly concerned in that moment of princess movie realization that 1) oh God, what if there isn't a snowman at all, Noah is going to be SO MAD AT ME, and 2) I'm either going to fall asleep or they'll freak out make us leave. Either way I just wasted a ton of money on movie tickets.

And then That Scene with That Song started and Jason and I were like, "HEY IT'S MAUREEN FROM RENT!" and then she put on That Dress and was all SUCK IT, BITCHES and my little feeble girl brain just about short-circuited and squeeeeee and I loved it and bought and downloaded the soundtrack before we were even out of the parking lot.

(Them, during the sad instrumental part of "Do You Want To Build a Snowman?", every time: AND NOW THEIR PARENTS ARE DEAD. OH WELL.)

And then I took the boys to see it AGAIN the next weekend, and then AGAIN when a friend of theirs had her birthday party at a sing-along showing at the movie theater and I did indeed sing along like a moron, and I don't really know why I'm telling this story NOW, months later, except maybe to finally come clean and confess to anyone who has been driven mad by Frozen mania or been unable to get That Song out of your head since February that I'M SORRY. I WAS PART OF THE PROBLEM.

Anyway, back to Father's Day. The boys really enjoyed the movie, even though it was probably a little intense for the average 3 and 5 year old. I guess mine have just been thoroughly desensitised from my history of dragging them to any old animated movie I know nothing about because I don't know what else to do with them that day. Just sit back and enjoy the emotional scarring, kiddos. Have some popcorn.

Ezra felt, however, that our lack of real planning or special dad-related activities was insufficient. He came home and shoved a bunch of mini toy basketballs and footballs into a gift bag and presented it to Jason with a card he made out of a Target receipt. Then he announced that he was going to decorate the house for Fathers Day and needed some tape.

I didn't ask. I just gave him the tape. I really do prefer to go through life with as little information as possible. 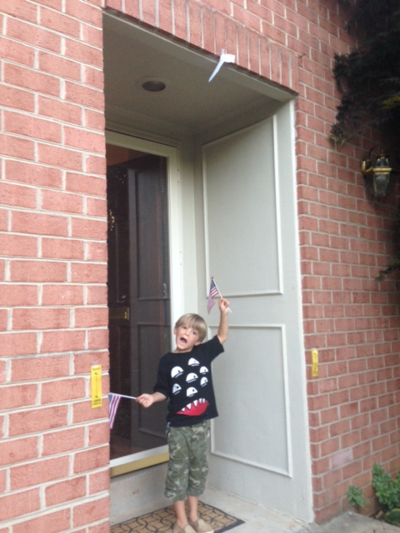 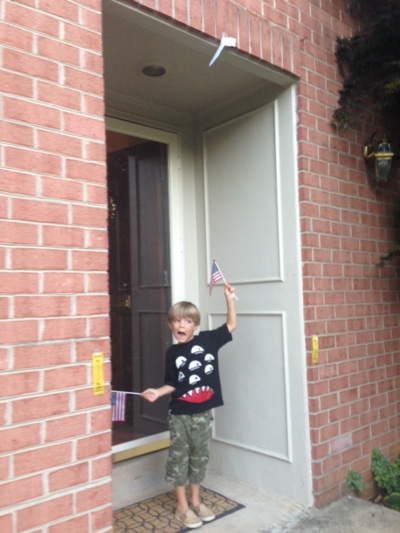 They may still be out there. We have a couple weeks before it's considered tacky to still have your Father's Day decorations up, right?

How did he get that up there? *whispers* Can...Can your child fly?

I can see that happening in HTTYD2, since they totes cut off a kid's LEG in the first one. I'm excited to see it even though my son is too young to even go to movies, let alone see that one. It's just good storytelling, no?

My daughter decided to decorate our house for Mother's Day - she got up early Sunday and had it all decorated for when I woke up (she's 6). I loved it so freaking much that I refused to take them down for weeks.

My kids must also announce the Frozen parents' death!

Still chocking on my mini Starbucks from the "We brought them to a fucking princess movie" hahahahha. Every time I read it I bust up laughing.

My two-year-old boy for weeks insisted upon me doing an a capella solo of Let It Go every night at bedtime, and he always points out when the snowman appears and when she throws off her crown. :)

Since I have a TEENAGE BOY, I have not seen Frozen yet. I went by MYSELF to see Pochahantas when it came out in 1997. I either need to rent Frozen & watch it by myself, or see if my 8 year old niece wants to watch it again. No movie scares the teenage boy...he wants to see rated R's, but we will not allow because he will be 15 next month. Also wants rated M video games...not allowed those, either. SIGH...

My son, who is an aged 3.5 years old (I'm a BIG GUY, Mommy!) was singing himself to sleep the other night with Let It Go. We have not seen Frozen (that's for giiiiiiiirls, mommy.) So I'm guessing it's on the music loop at daycare otherwise I have no idea where he would have heard it. ITWASSOCUTE. I don't care for princess movies either but gah, adorbs.

3 movies on my list that I want to see (but couldn't take my kids because they are too old for going to a movie with mom) are Monsters University, Smurfs (my 1980s childhood awesome!) and Frozen. My kids (teens) have both seen Monsters U & Frozen several times, increasing my uncoolness. =)

When Frozen came out I had planned on just taking my my 11 and 3 year old daughters to see it while leaving my 16 and 1 year old sons at home. It turned out that my 16 year old, video game playing, never wants to do anything with his family any more, son, wanted to come with us. That's when I knew Disney had a hit on its hands. My 11 year old liked it but still doesn't get what all the hype is about. She's a quirky never follow the pack kind of kid though.
When Frozen came out on DVD, one of my son's 11th grade classes had a thing at school one evening where they chose to watch Frozen. My son was happy to go and even brought home made muffins baked in snowflakes covered wrappers.

In the "Taking children to inappropriate animated films" sweepstakes, top this: I took my children to see The Triplets of Belleville one rainy Sunday when our plans fell through. My son is in college and still brings it up as a scarring event in his childhood. Rotten Tomatoes, which I did not consult, says, "Richly detailed and loaded with surreal touches, The Triplets of Belleville is an odd, delightful charmer." This may be true, but not for an 8 and 4 year old.

We're still singing Let It Go around here. But I saw Idina Menzel in "If/Then" and so now when I hear Let it Go, I also hear What the Fuck. Super catchy, both of them.

I took my 9 year old niece and her 5 year old sister to see Friday. All I knew about that movie was that it starred black people & it would be an easy day at the movies. Um. No.

The amount of apologies I had to give was epic.

We live close to the beach so my son collects a ton of shells then tapes them up all over the house as "decoration" I find shells in the weirdest places . . .

Pretty much every children's movie involves at least one dead parent, usually the mom. At least 25% of kids' books do too. Why do they have to kill the parents off in every single damned movie?

I am so with you about Cars 2. My 4 year old (he will be in two days, I've been rounding up for months) loves Cars, so one day I bought Cars 2 and we let him watch it. We weren't thrilled with it, but stupidly didnt take it away immediately. A few weeks and maaaaaany repeat viewings later during a tantrum he told me that I had to be killed (direct transferred quote from the movie). Along with a lot of shooting play - because damn there are a lot of guns in that movie - that was the last straw.

The DVD is now officially lost/gone. My son unfortunately has the memory of an elephant and clearly realises that I have deliberately 'lost' the DVD - so now we've moved onto 'We don't watch that anymore because it's not a nice movie'. So far that's working - we've also pulled waaaay back on screen time and the tantrums have disappeared - so fingers crossed.

I remember a friend telling me Planes was horrible because 'planes died in it!" Uh, Planes was horrible because it was just a bad movie. My boys like Frozen well enough but ask every.single.time why the ship sinks. Which is fantastic since my husband is in the Navy. They were both (5 and 2) also terrified by Brave (the stupid bear) but LOVE Cars 2.
In other topics, I'm on the side of disliking "That Dress" and also "That Horrible Eye Makeup" because being free from her worries doesn't mean she has to suddenly dress like a whore, but I guess it wouldn't be a Disney movie without some cleavage and princess sex appeal.

That was my exact experience taking my boy children to see Frozen. I thought it was about a snowman and reindeer. Worse, their favorite number is the ice chopping song, which means they have to pick up their plastic gold clubs and "chop ice", i.e. whack the living bejeezus out of everything in the playroom when the movie starts (because of course we bought it on itunes).

We saw How to Train Your Dragon on Father's Day as well. Nothing says "We love you dad!" like a movie in which the father dies! I was also bawling like a baby after that too! Parenting win!!!