Just a few of the things I learned last week, during our three-night dinner adventure with Blue Apron:

4) They ALL love quinoa.

5) I love quinoa. I just haven't been cooking it right.

I also learned that I really need to challenge my kids more often. And myself. And also grocery shopping can bite me. 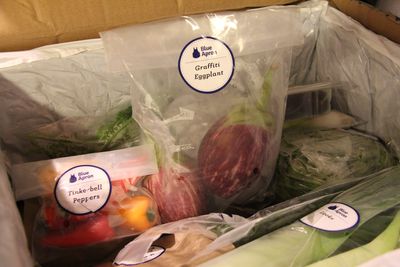 Three (recyclable, biodegradable) boxes of food were delivered to our door, each containing three nights' worth of meals for two people, plus recipes. (Click here to see the current delivery zones.) All the ingredients are locally sourced, labeled and perfectly portioned, along with any special oils, sauces and spice blends. I'd rounded up to six servings for our family of five because I have hollow children, but we totally did not need the third box, like AT ALL. My bad, Blue Apron. I unintentionally scammed you. Two boxes easily fed all of us, with enough leftovers for me to get a really satisfying lunch out of the next day.

(Not that box number three is going to waste or anything. We’re zipping through recipe lineup a second time, just adding a bit more of the main protein.)

The timing couldn't have been more perfect, what with Jason and my dedication to our healthy habits/exercise Chart, because all three recipes were incredibly healthy, and waaaay more complete of a meal than I admittedly put together on a weeknight. We make some pretty great recipes, but still have a bad habit of focusing on the protein and a kid-friendly carb and then forgetting things like...vegetables. Salads. Stuff that will cause sturm und drang when set before the children because I DON'T LIKE THAT DON'T MAKE ME TRY THAT. 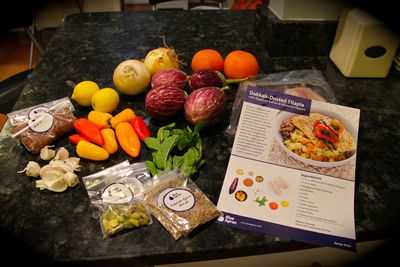 My kids looked upon this display with mixed results. Ezra and Ike declared it "pretty." Noah demanded to know where the macaroni and cheese was. 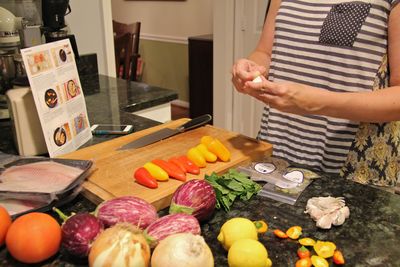 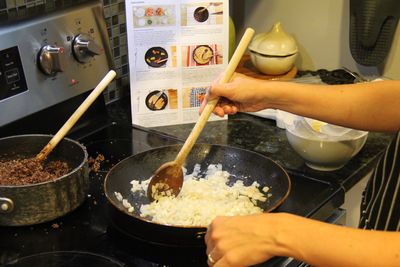 It was grown-up food. More grown up than we usually eat. Dukkah-dusted tilapia with eggplant sofrito, red quinoa AND blistered peppers? I'd consider dinner a success if I got just one of those things on the table in time, and now I was making all of them in under 40 minutes.

(I kept quoting Sarah Jessica Parker’s character in The First Wives’ Club: “But this, this is like restaurant quality!”) 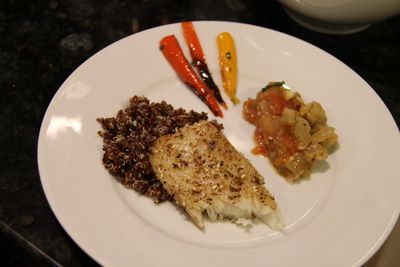 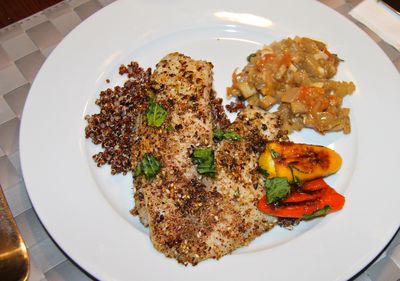 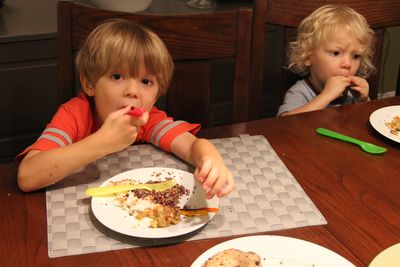 Ezra's reaction was particularly Ezra-y. Nothing makes that kid happier than trying new foods. Two thumbs up, fine holiday fun. When Noah protested the inclusion of the eggplant sofrito on his plate, Ezra assured him, "Don't worry! It's DELICIOUS." 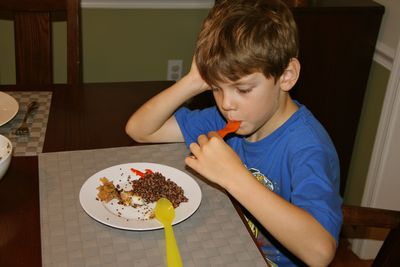 Noah gave it a cautious try. He thought about it a good long time. Then he announced that yes, it was pretty good and he liked it. He also really liked the fish (it helped that the crust included pistachios, his favorite nut), and man oh man, did he ever LOVE the red quinoa. Three or four helpings, I think. I lost track after awhile.

(Do I even need to say what Jason and I thought? It was AWESOME. There's your official, unbiased super-eloquent review: This meal was crazy-pants awesome.)

Next came braised pork chops and roasted leeks with cherry gastrique (OH HAI I KNOW HOW TO MAKE A GASTRIQUE NOW) over kasha. Zero complaints from any of the children about any of it — Noah was already totally down for any of "the food that came in the box," as he called it. I wasn't sure how I'd feel handing over control of our meal planning, to be honest, but it couldn't have been a better experience. And totally eye-opening to see just what my kids will try and like if I just make it and put it in front of them instead of defaulting to the oh-just-put-everything-on-noodles style of cooking. And I really need to up my vegetable side dish game. AND GROCERY SHOPPING CAN STILL BITE ME.

Our final meal was Asian chicken lettuce wraps with Forbidden Rice (Noah's new favorite rice, and that boy knows his rice) and a jicama and watermelon radish slaw. The slaw ended up a little light on the jicama because Ike ate most of it while I was still cooking. 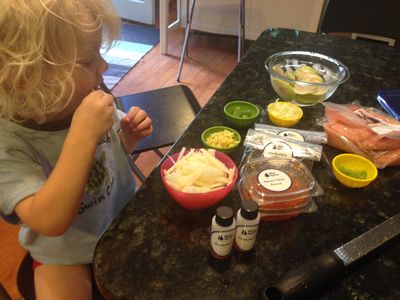 We might not all show up to dinner wearing pants, but by God, we're all going to eat grown-up food and like it.

Want the recipes? Click here for the Blue Apron cookbook.

Want the ingredients? The first 250 Amalah readers will get two free meals on their first order! Follow this link to claim the discount.

I am going to call this one NOW. The Mighty Za is going to be a television personality. I'm not talking Jerry Springer, I'm talking a kinder and gentler Anthony Bourdain, traveling the world and reassuring kids that the food! It's good! Also? You can make a gastrique? I can't SPELL gastrique!

We tried Blue Apron. Neat idea but too much work and too many dirty dishes for a weeknight. When we had it, it was a spaetzle butter dish was delicious but used: 2 pots, 3 pans, a strainer, a cutting board, a dish to melt the butter in the microwave, you get the idea.

It sounds awesome, but they don't deliver to Madison, WI! :( I'll check again if/when they expand their delivery area.

Oh I wish they delivered to my area :(

I have looked at the Blue Apron website probably 6 times a week for the past 6 months thinking, I'd love to try this... now I really will. Thanks Amy!

Damn, I'm right in the middle of the NO BLUE APRON FOR YOU! area.

Ooooh, I've signed up and can hardly wait!

I hate vegetables, probably because I don't know how to make them taste good. Looking forward to learning. Thanks Amy!

So, how DO you cook quinoa the right way?

Thanks for the discount - just what's needed to shake up my cooking rut.

I loved Blue Apron but I have to agree that the prep was a lot. Now that my garden is coming in full, I'm not getting the boxes so I can use my produce. I may or may not pick back up with them because my RelishRelish meal planning site allows me to plan around my week a little easier.

I've been on the fence about trying this for so long. But I bit the bullet since you had the promo code... I'm such a sucker for a deal.

Also? Jealous. Your kids eat these things. We've tried the books. We've tried all the methods. My four year old foster daughter eats NOTHING. The damage that her birth parents did to her willingness to try new things by the time she was three and a half is amazing.

So I loved Blue Apron when we tried it. I totally ate foods I had never had before and learned I liked them. Go me! But, how do you manage cooking things like a gastrique on a weeknight with three critters at your feet? I had to take a hiatus because some of those meals took me too long to make until after the kids were asleep. But yes, fun! delicious! grocery shopping sucks!

I really just want you to know that I read to the end even though I'm at work starving and the red quinoa is calling my name (but am I cooking it wrong? If they eat it and it's wrong HOW WILL I EVER KNOW?). I left my bank card in the blazer I wore yesterday and I'm not friends enough with anyone here yet to bum a $5 footlong off. (I secretly adore grocery shopping (as long as I'm alone and have enough money to get the frivolous things off-list that I get when I'm alone)).

1. LOL at their delivery area. (Texas people, Greenling does this kind of thing for about the same level of holy-crap-that's-expensive.)

2. I need a course in Foodie as an Additional Language, because there were several words in here that my mind just didn't have a picture for. (Ka..sha?)

3. The meals look awesome and I wish I felt less haggard and more able to produce similar deliciousness with any frequency whatsoever.

You had me at gastrique. This looks very cool and I'd love to give i a try.

Food shopping indeed can bite me. I've been getting things delivered for ages. Not awesome pre-prepared food, but local grocery stores often will now let you online shop and then deliver. And it forces me to plan meals.

Really, kasha. I tried it, I did not care for it. Maybe I'm making it wrong?