So this finally, officially happened. 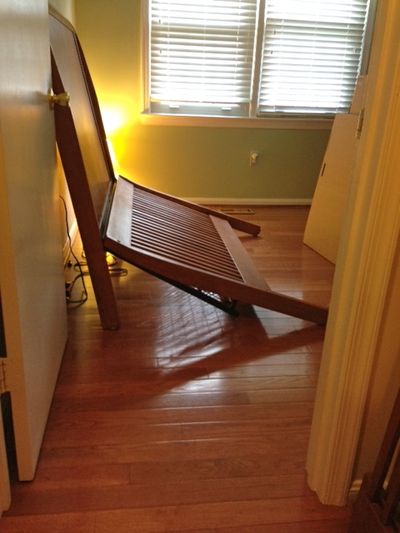 Friends of ours are expecting and took the crib away this weekend, which was a weird mix of "aww" and "good riddance, giant heavy-ass thing we never use anymore."

We've had that crib in our house for about nine full years, and while it wasn't always in constant use for nine full years, we at least had plans in place to fill it with another baby eventually. So it stayed up and assembled the whole time.

No plans. No babies. Smell ya later, crib. 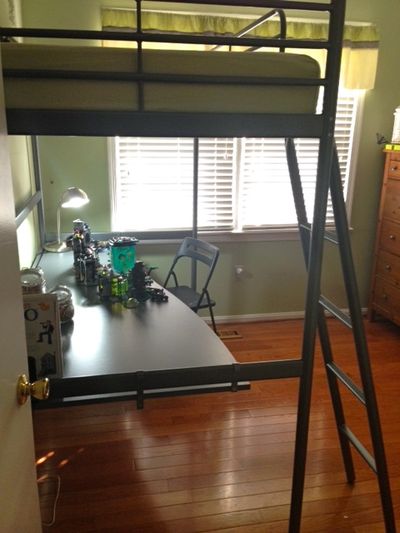 This isn't really an official "after" photo of Noah's tiny new room, since it only reflects what we accomplished in a single weekend, which isn't much.

Wait, no: We accomplished 1) going to Ikea to purchase this bed/desk combo, 2) reveling in the fact that ALL THREE of our children are height/age eligible for the children's area, 3) getting paged back to the children's area after 10 damn minutes, 4) booking back to the children's area expecting an Ike-related potty disaster, only to be told "He's not listening. We have rules. He has to leave," and I immediately assumed "he" was "Noah" and internally debated pulling the special needs card, until it was revealed that oh, they were talking about Ezra.* Huh! That's unexpected!

So we 5) trekked around Ikea with a mortified 5-year-old who couldn't BELIEVE he'd been kicked out of the children's area, and now had to spend the next hour listening to his parents bicker over chairs.

And then 6) we came home and assembled this shit, and only had it collapse on us and put a hole in the wall ONCE.

Finally, 7) Jason surveyed his assembly-work and waxed nostalgic about the old metal bunk bed he had as a kid and all the various injuries that happened on it. Fantastic! Thanks for sharing! 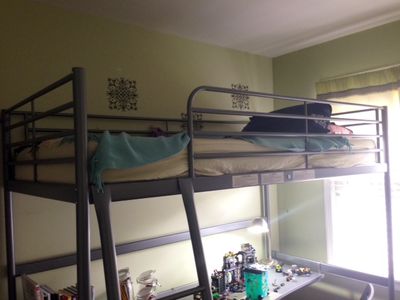 *Ezra wouldn't stop jumping in the ball pit. They were concerned he was going to land on someone, which I get, and of course he should have listened to the adults in charge. But on the other hand, isn't jumping in ball pits pretty much the best part of ball pits? Besides all the bacteria and used Band-Aid prizes? 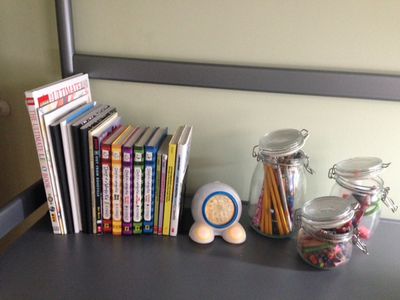 Noah will NOT let us paint the room or remove the curtains, wall decals or butterflies, no matter how many awesome Boy Room Pinterest options I offered. He was okay with donating the crib but got very upset over losing the glider and changing table. I forgot completely about buying addditional bedding, so he's got one fitted sheet and a throw blanket, for now. We still have two dressers to remove from the room (his entire wardrobe only takes up about a quarter of the closet — though I suppose it's possible that I'm just more behind on laundry than I realize). We're much more in need of toy and book storage and I want Noah to have a quiet sensory corner where he can hide or rock or spin.

But we figured we'd pace ourselves on the dramatic purging and redecorating. It's a lot of change for him. 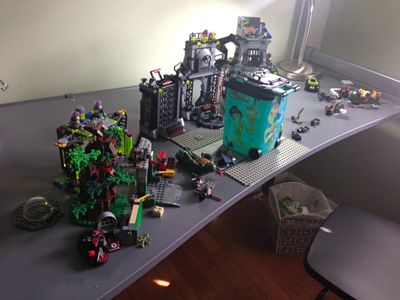 The transition was made a little easier by our relaxing on the "no Lego in your room" rule. At this point I'd be happy to put ALL the Lego in his room. It'll save me from having to buy an area rug. Just pour the whole collection on the floor and let the room slowly become a Lego-filled ball pit.

(I'll totally let Ezra jump in it, too.)

I remember my brother jumping off the back of the couch into a pile of Legos and getting a Lego stuck up his nose. My mom didn't find out how it really happened until many,many years later.

Sometimes I feel like we are living parallel lives. We, too, got rid of the crib yesterday. We, too, did a lot of room rearranging that freaked out all involved.

For room-friendly sensory hide-outs, I highly recommend a southpaw swing. Here's what ours looks like:

When mine is losing his schmidt due to some sensory infringement or another, he heads (or is strongly encouraged to go/led by me) to the swing and reads a book while listening to calming music...

Hi, Totally not spamming here, but I realized there's a better pic of the "cuddle swing" in this post: http://www.momintwocultures.com/2014/04/update-number-twenty-seven-zillion.html

FWIW, the swing is easy to hang and doesn't require a whole bunch of space...

Sorry for two comments with links, but I totally get the need for a chill out space for ASD kids.

FWIW, my husband got kicked out of the Ikea childcare when he was about 8, because he was throwing balls at the other kids. He turned out to be a mostly-socially adept person. And I agree. If you can't jump in the ball pit, what's the point?

My son has had that bed for five years, and it's held up well. Unfortunately, he's almost outgrown it. :( Hoping the new bedding isn't too traumatic.

This made my day. Truth is, I never drop my 5 year old daughter in the child play area, because I'm pretty sure she'll get kicked out. "Rules" and "listening" are not her strong suits. But now, I can be all, whatevs, that happens to everyone else too! No shame.

IKEA kicked my kid out because "he was too sad." Those are the words that came out of the lady's mouth when we rushed back because the pager was beeping after a few minutes of dropping him off. He was sad! His feelings! I tried to explain that I would be very sad if I had to take him back and not buy a couch.

Big mistake getting rid of the crib. I'm of the firm belief that getting rid of your crib causes pregnancy, since as soon as I got rid of mine after two kids, I got pregnant with number three. His crib was never given away, I just loaned it to someone. It's been 42 years, but it's still my crib.

Glad to see Noah's a Diary of a Wimpy kid fan

I'm sure Noah loves having his own room (I mean, *his* *own* *room*!). What caught my eye was that cute little footed desk clock. Where did you find it? It'd be perfect for our computer desk, where space is a minimum. Thanks!

We've got the same Ikea loft bed, but ours has a useless shelf above the desk. As your son gets heavier, you may want to consider some type of bolting to the wall, turning over in the bed tends to knock anything on the desk or shelf over.... Love your blogs

I love this. I can't wait until Ikea care takes my kids! And the special needs card ... I love that it wasn't him. I love that all kids are nutty!

But, since the comments already started going all SPD product ... Does anyone have recommendations for a crazy SPD kid when I can't get a swing up? I've drilled a dozen holes but it looks like our ceiling is metal and/or is most definitely not held up by anything??? I liked our one use of the pea pod (not the baby tent by the same name but a squishy boat-like thing. Does anyone love that? Or know of something better? Or cheaper???

I know you hate assvice so this is just a suggestion for Noah's Quiet Corner. I saw this thing on Amazon (that, seriosuly, I kind of want) that is a silk-ish teepee. It suspends from the ceiling and is a small, circular, closed area that he could go into and shut out the world, sort of.

My 9 year old still has Winnie the Pooh pictures, along with superheroes, on his wall because he would not let me take them down. He went away to camp for 5 days and when he got home he kept saying "what did you change in my room? It looks different". I think I cleaned it a little. Change can be so hard for some of our kiddos. The Pooh pics are coming down before school starts.

Sooooooooooo they wouldn't just let you tell him to cut it out? He had to leave? I'm sorry, ma'am, we have a zero tolerance germy ball pit. How about I just couldn't help but smirk and want to high five Ezra for being the unexpected stop jumping refuser?

Congrats on getting rid of the crib! Exciting times. Also, just thank you for all your fuck the zoo posts. I went today and about had a mental breakdown coming home. It is the worst. Just reread all the zoo posts and felt a little less alone in being the only people who hate the gloriousness of the zoo. I mean, really, they built it on one of only what, two hills in the whole city?!

Someone asked about the clock and we have that one too! (I feel super cool to have something that amy's kids also have!) My kids just started using the alarm part of it, but we have had it for years for the "ok to get out of your room" signal when the clock changes color. Love it.

I definitely assumed, from the title and first photo, that the crib had straight-up collapsed (and I guess the rest of its pieces magically disappeared?). Glad to hear it didn't; an IKEA adventure is probably similarly traumatic, but at least it also comes with some fun stuff.

I have that Ikea loft bed as well, and it's held up well to multiple years of a full-weight adult sleeping in it (which surprised me, actually). Rather than using the attached desk (which I was too cheap to buy), what I did was put a 5 foot folding table half in and half out (so it's the long way along the wall that the bed is the short way along) and then a tallish armoire under the rest of the bed to store things in.

This is nice because nothing is attached to the bed, so when it shakes a bit things don't generally fall off the desk-table. (I also have a short bookcase stacked on the table for more storage space.) I also stacked wire baskets on a dresser next to the bed to get them to the height where the top one could function as a sort of bedside table for books, phones, and such, but I don't know if that's as generally useful. (Since my household lacks young children, I also ignored the various safety warnings and got yet more baskets that hook over the edges of the bedrails for further storage and a clip-on lamp for the bedrails to make reading in bed easier, but mine is for use by an adult and I may feel somewhat over-safetied by all the Ikea warnings since my childhood bunkbeds had neither side rails nor a ladder and I only had to go the ER ONCE for bunkbed-related injuries.)

Anyway, at Noah's age he may still appreciate having a fort-area (with sheets or curtains hung from the underside of the bed blocking the views) instead of an armoire or other piece of storage furniture if you go that route. I know I had a "fort" with curtains under a much shorter but otherwise similar trundle bed setup when I was a kid.