The Mighty Zah, Kindergarten Champion of the World

Yesterday, Ike had his one-on-one visit with his new preschool teacher, who was formerly Ezra's preschool teacher. It went supremely well, as soon as I unhooked him from my legs and left the classroom and he stopped meowing like a cat. Five minutes later he was sitting at a little table, getting his first Official Montessori Lesson and loving it. And acting way, way more civilized than the 3-year-old feral tornado I spent all summer with.

While we were there, everyone at the school wanted to know: How's Ezra? How's kindergarten? Does he like it? How's the transition going?

Here are a bunch of the words I used to answer their questions:

Noah's transition to kindergarten was...rough. Even though he'd attended preschool at the public elementary school, he seemed utterly unprepared for the shock of all-day kindergarten. He came home every day his first week exhausted and overwhelmed and would beg me not to send him back. I'd say it took him several months to fully settle into the new routine and even longer to get anywhere close to "enjoying" school.

Ezra, on the other hand, is SUPER MAD at Labor Day. Keepin' him from going to school on Monday, like some punk-ass national holiday all full of itself. It's bullshit, man.

It helped, I think, that he attended his preschool full day last year, so he got used to staying through lunch and the afternoon in a more laid-back environment. But I was still concerned about how the Montessori-to-public-school transition would go — Ezra was so, SO excited about kindergarten all summer and I couldn't help but worry his enthusiasm would collapse under the shock of a more structured day and traditional curriculum.

When he comes home, his first and only lament is that he STILL doesn't have any homework. When will he get his homework? He was promised his own homework this year, you know. He and Noah sometimes sit together on the bus, sometimes he sits with another kindergartener, either way it's super special and fun, because he's ON THE BUS. His teacher is nice and makes funny faces and they made their own BOOKS and they worked on COMPUTERS and they eat lunch in a special LUNCH PLACE and it's all just so thrilling and exciting.

Granted, he can be a bit of an unreliable narrator — last night we made dinner together (I chopped up celery and green peppers; he ate the celery and green peppers) and he spun a tale of getting in trouble and being sent to the office. He couldn't seem to come up with the reason he got in trouble, and clearly had no idea what happened when one got in trouble and sent to the office. (SPOILER ALERT: THEY CALL YOUR MOM ON THE PHONE. WHICH NOBODY DID.)

Eventually he told me his teacher took him to the office to show him a picture. A picture of...uh...um...celery. Yes. That's it. He got sent to the office and looked at a picture of celery. And then he went back to his classroom the end.

Suuurrre. Okay. You stay out of trouble there, kid.

I asked him if he'd made any new friends and he said yes. Who are your friends, I asked. What are their names?

He rattled off an impressive list of names and then stalled a bit.

That one, actually, I completely believe. 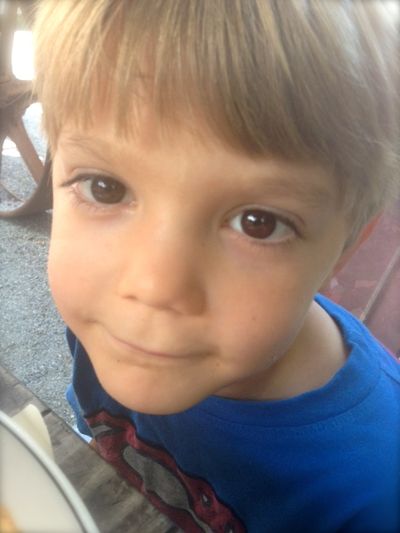 Zoot has a story about her daughter inventing homework repeatedly. Maybe an option for your zah?

I love that freaking kid so much :)

(well all your kids really, my little man has a lot to live up to)

Today's my guy's first full day of kindergarten complete with the Riding of the Bus and eating lunch in the Special Lunch Place. I'm very much looking forward to stories about celery myself. Go Zah!

I can totally relate. I was a lover of school too. Still am. I would love to go to school for a living, but I can't find anyone to pay me to do it. I just wish that my kids had inherited just a little bit of the school love from me.

Awesome, Kindergarten wasn't so awesome for us last year, the unknown freaked her out. But this year - she's a first grader and she's an expert and she can read and "Mrs. T thinks I can't read. She's trying to teach us again and I already know". So funny. She also tells me almost daily that they aren't learning too tell time yet, which I can see annoys her. Congrats Zah...school can be awesome!

"(But he would really like some homework.)" MORE PROOF THAT LITTLE KIDS ARE CRAAAAAZZZY. But he's so cute.

Well dang mom! Buy the kid some books and give him homework! Or, he can do mine that never got done 30mffft years ago!

My daughter started Kindergarten two weeks ago, and they only started handing out homework this past Monday. She was REALLY into it, like didn't want to stop and go to bed. I had to remind her she had all week to do her homework. But yeah, my daughter is just like Ezra - loves Kindergarten, loves homework - except she doesn't remember anyone's names except for the girls on her soccer team.

Miss Mabel started on Tuesday and I've already heard that she's "having some trouble following direction". Which I think is very diplomatic when it turns out she said "No" and sat down on the floor when asked to face forward in line on the way to lunch.

So, settling in. On the other hand, she goes every day and I can leave her sitting there without having to peel her off me screaming, as was the case with her brother three years ago, so I sort of prefer this method of settling in. I think.

Your kids are awesome! And Ezra is so cute with his request for homework! I totally remember doing that myself, way too many years ago. Until I actually got some homework. Then I had enough and it could stop. But it didn't!

THAT FACE! I remember printing worksheets last year because pre-kindergartener Zaid wanted homework. "No. No, Mommy. A teacher has to give homework." I haven't been proactive since. (And I totally had that as proactiv first because commercials.)

Send an email to his teacher! I am sure she would LOVE to hear how much he is enjoying it! (Positive parent-teacher communication FTW.)

T-3.5 days until the middle schools walk through my classroom door! Back to work!

Kids are so unreliable! I get crazy tales from one of my twins (just started 1st grade) about field trips with JUST her and the teacher. And her best friend. And Rachel (her twin). And Rachel's best friend. And they went to a farm. Uh huh. However, I get absolutely nothing out of her twin sister about her day.

We went from 2-day a week preschool to full day kindergarten last year, and it was ROUGH. My girls cried every night for at least a week, complaining about the long day, and it was about 3 weeks before one of them would even go into her classroom without hiding behind me. But I know little sister will do swimmingly. Must be a younger sibling thing.

Oh, I love these stories. And I can relate after the conversation this weekend with our four-year-old who demanded to know why he cannot attend school yet (here they start at age six). Please, please, please can he go to school, please. He is most put out that the system is so against him.

You get the best pictures! I am constantly jealous of your camera skillz.

I'm glad I don't have the only yarn-spinning new kindergartner. My oldest is much like Noah, ASD and all, so I never had that. But until last week, I got daily stories from my younger one about going to the office and/or nurse. The stories stopped last week because she actually DID go to the nurse, and perhaps realized it was not all that fun.

Oh, Ezra....you, beautiful, sensitive child, are going to make a wonderful husband someday. He's what? Five? My daughter is seventeen....nah.
He truly has a love of learning, which is a gift in itself. He will go far.