They Paved Paradise & Put Up A Lego Lot

The time has come to bid a fond, final farewell to the beloved, fantastical, fucked-up Isle of Sodor. 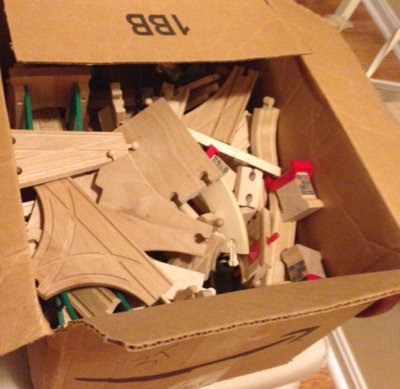 Our neighbors threw a party this past weekend and I met a mom who lives down the street. A mom with a little boy; a little boy who was running around with trains in both hands and determined to make every other non-train item he encountered (toy cars, carrot sticks, a dog) into choo-choos.

She was very pregnant. I sensed weakness.

"Sooooooooooo have you guys bought any Thomas trains for him yet?"

BAM. DONE. All our trains are belong to you, now. SHUT UP AND TAKE MY TRAINS.

Despite being SO SURE that investing in a bajillion miles of train track was a worthwhile plan because "every kid we have will play with them!", it didn't really work out. Ezra was only mildly interested in them, while Ike could not care less about them. He only wants to play with and watch what his big brothers are currently into, and skipped right over Thomas completely. And so our collection has been sitting in a heap while other toys and clutter piles up around them on the train table, taking up a large chunk of valuable real estate.

My neighbor already has a train table. (Thanks to another neighbor who moved and didn't want to drag it with him, LO DO YOU SENSE A THEME, FUTURE TRAIN-AND-TRAIN-TABLE PURCHASERS OF THE WORLD?) So I needed to do something else with the train table.

And so, dear readers, gentrification came to the Isle of Sodor. A multinational Danish company arrived and resurfaced the whole thing with their patented interlocking brick system. 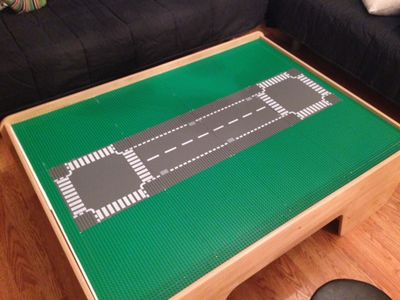 There are literally four hojillion helpful and beautifully photographed tutorials on how to turn a train table into a Lego table on the Internet. LITERALLY. This post is not one of them. I did this last night in about 30 minutes, after two glasses of wine and in terrible lighting. It was easy, though today I need to dig out the extra glue squooshes from inbetween the Lego plates with a razor blade, since I got increasingly glue-happy as the project went on.

The great train decluttering is just one small part of a larger attempt to Take Back The Basement, since it's woefully underused as a playroom. The kids don't like playing down there without us; we don't like it because it's always a giant mess of a Kid Cave. So we're converting it into a proper family room/guest room. Or really just some kind of room we (and kids/friends) will actually enjoy being in together. A mostly grown-up space, with drastically pared down toys, albeit with a Lego-topped coffee table. I figure it'll give us all something to do when there's nothing good on TV.

I'll have more pictures of the makeover soon, but first I need to re-ice my foot because I decided to weight the still-drying plated down with our barbell set and of course dropped one of them on my damn self. Because nothing I do is complete without injuring myself. Da. Fuq.

Farewell, Drunk Sir Topham Hat! Farewell, Thomas and Percy and Duncan and Thomas' Evil Twin! Farewell to the motherfucking monorail and Ye Old Genetics Plant and our dozen or so Bridges To Nowhere! (But technically only a "see ya later" to the dead guy floating in the lake. I flipped the top boards over before gluing anything, so it's entirely possible that one day I will get bored/drunk enough to bring back...whatever...that...weird thing was. I'm still not 100% sure either.)

Aw. Farewell, Isle of Sodor and related hilarity. Amy, your posts made watching Thomas with my toddler so much more tolerable.

Pro-Tip - get a custom cut plexiglass topper for that table so that you can actually use it for coffee table without having to routinely scrub pbj crumbs from between the legos!

Dammit, this reminds me that I have to get a new Duncan before Teej asks me where Duncan go.

I was THISCLOSE to posting our train table and trains to Craigslist - like, had my phone in hand with the CL app open - when my oldest commandeered the table for a musical stage and the youngest began assembling track stretching from one end of the (very long 70's style ranch house romper room basement) family room to the other.

I love the idea of repurposeing the table as a Lego dumping ground, but holy hell those base plates are pricey!

So it looks like you got you F fixed! Or are you still using the Portal?

And I keep forgetting. The Fancy Feast Broths are a 1 cat huge hit here. Mah girl Savannah LOVES. Her bro Orleans, notsomuch. She has not barfed once since I started feeding it to her. Oh, she still horks up hairballs the size of Texas, but at least it's not just after she's earen.

But - Wait! WHAT will your grandbabies play with?? (that's my rationale for keeping boxes full of Lego; Duplo and K'Nex!).

I have a 2 year old thomas fanatic here... Shame we're not neighbours

Wendy - Put the word out you need a train table and Thomas stuff among your friends. There's ALWAYS someone looking to get rid of them.

We are just entering the world of Sodor over here. But in Australia we get the English stuff - so Sir Topham is charmingly called 'the Fat Controller' (there is also a thin controller apparently) - something my not quite 2 year old has taken up saying 'fat 'troller'. Lovely.

I have just accepted the inevitable, and am buying a second hand set and table for his next birthday. I kid myself that it is fine if I buy second hand…. but at least I will be able to get rid of it the same way!

Love that idea! I didn't know it was a thing, but I do love repurposing. I'll have to tell my train-table-having friends about this.

I loved those Sodor posts SO MUCH.

Maybe because I made the same misguided assumption that my kids would love trains and play with them foreverrrrrr and after one figure-8 they were entirely unimpressed and already building a proton-collider out of Legos.

I repainted our train table into a cool art-collage thing and convinced myself that it could become A Thing -- a Hipsters-with-artsy-play-tables thing? I don't know -- because apparently there are many of us in this repurposed Sodor boat. Alas, that idea never gained steam, either.

The true genius here is your writing, which stays awesome no matter the passing fads. Carry on!

Amester, I was right there with you until you DROPPED A BARBELL on your own damn foot... what are you-f'ing crazy ?~! That shit hurts. Cut It Out. You're giving me limps for which I have no logical explanation, causing MY husband to wonder who Amy is and why my foot hurts for her... It's getting harder and harder to explain...

We thought we were done with the Island of Sodor too, and then my son (age 4) requested them back from the garage. It's now a completely different game for him as he can put together the tracks pretty much all by himself. Before we had to help him set up the track and the game was really playing with the trains. Now the trains barely get played with at all,it's much more of a constant construction zone.
Funny stuff. I'll be sad when it's time to pass on the trains, even though our living room is constantly covered with them.