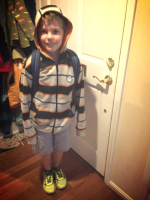 It's been a few years since one of their birthdays really and truly unnerved me. Nine, for some reason, is an age that does. Nine. NINE. One year until TEN. I don't feel old enough to have a nine year old. But obviously I am. My years of parenting babies and toddlers are almost completely behind me now, and that's only "almost" if you include Ike under the toddler umbrella, which: Okay, but barely. I've got maybe six more months before that's officially ridiculous. Nine. He's a quirky nine, but self-aware of his quirks and self-accepting of most of them. Frustration swirls to the surface occasionally, sometimes anger, but mostly an over-the-top positivity and excitement that can only be expressed at top volume while he tells you absolutely everything he knows about Ninja Turtles. He can stop himself now, though. He'll ask you first now, like an earnest, door-to-door missionary: "Are you interested in Ninja Turtles? Would you like to talk about them?" A yes brings a look of immense relief and happiness to his face, a deep breath before he can uncork the thoughts and words in his brain and let them out. All of them, at once right... Read more →

Noah and Ezra had the day off from school today. I most certainly did NOT have the day off from work. IT'S. BEEN. GOING. GREAT. A good dozen Photo Booth photos of them pretending to strangle each other. Every mother's preshus memory dream. It's a shame Ike had to go to school; I could've gotten our holiday card in the bag. Read more → 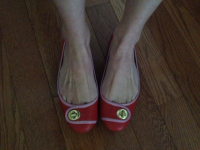 So I have this pair of shoes. They are red with pink trim. I don't wear them very often because they are red and pink, already two colors I don't wear much in general, and because they are a very SPECIFIC shade of red and pink. They either clash or look too matchy-matchy, which...is a thing, I guess. Matching too well. Sign of an unimaginative dresser. Or of somebody who didn't read that once in a fashion magazine in the dentist's office when she was 15 while wearing shoes that matched her shirt and purse perfectly, and who then sat there convinced that everybody was silently judging her matchy-matchiness, because when you're 15 you really sincerely believe that people actually give enough of a shit about you to be constantly judging your matchy shoes and/or the fact that your parents are there and they EXIST, oh my God. Anyway, I bought the red shoes a reeeeeally long time ago, but they're a ballet-style flat that tends to stay relatively in style (???), and since I've worn them maybe three or four times, they still look brand new. So I refuse to get rid of them. Plus they have this adorable... Read more →

Back to the Lunchbox 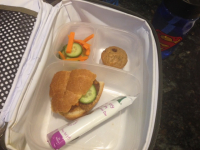 Congrats to Neena and Courtney, who won the 6-month subscriptions to NatureBox! I am officially pretty jealous. For anyone who didn't win, you can still try for free via this link. Ezra's love affair with school lunch ended somewhat predictably, and abruptly. Cafeteria-style pancakes are better in theory than reality, as anyone who has ever gotten their little hopes up over a bad hotel breakfast buffet can attest. "I would like you to pack my lunch tomorrow. I will buy lunch again in five days. When I'm six. On Tuesday." (Leftover chicken banh mi with extra pickled carrots and cucumbers, go-to granola bar of laziness, and a freshly-baked chocolate-chip banana muffin.) Jury is out on whether his dissatisfaction with the school lunch offerings was the deciding factor or, you know, the freshly-baked chocolate-chip banana muffins. I feel like I've mentioned this before, but in case I'm senile: We make this outstanding recipe from King Arthur Flour, ommitting the rum/coconut flavor, walnuts and cinnamon chips. We use mini muffin pans instead of the standard size, and also found that nine times out of 10, you can skip the paper liners if you just grease the pans really well. (And even they... Read more →

So after all that lunchbox talk, Ezra decided that he DID want to buy lunch at school after all. He decided this on Thursday but didn't tell me. Instead, he simply "forgot" his lunchbox at school, on purpose. Because he figured no lunchbox = no lunch from home = buying lunch at school = PROFIT. But he didn't tell me the "on purpose" part, and still made no mention of wanting to buy lunch until Friday morning. I handed him an older, back-up lunchbox and was in the middle of reminding him to bring BOTH lunchboxes home when he promptly lost his shit. HE HAD A PLAN. A PERFECT PLAN. WHY WAS I RUINING HIS PLAN. I usually float the idea of buying the school lunch to Noah a few times every year, once the lunchbox fatigue really kicks in and we're out of milk boxes and I'm making sandwiches using the end pieces of the bread because that's all that's left. An emphatic NOPE is always the response, which I guess is fine because I haven't really heard much praise for the school food, and I know Noah would ignore every available option that wasn't pure starch-n-cheese. (Their school's... Read more →

For the First Time in Forever 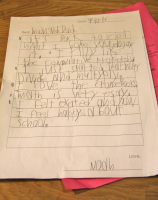 Noah's Back to School Night writing assignment. Write a letter to your parents and tell them a few things about school. Details to include: 1) Something you like ("the commutative propertay") 2) Something you LOVE ("the cromebooks") 3) Something new you're learning ("divide and multyply") 4) Your favorite subject ("math is very esay.") 5) How you felt on the first day of school ("excited")... And... 6) How you feel about school now. So yeah. An update in his own words. We're all really, really enjoying third grade so far. Read more → 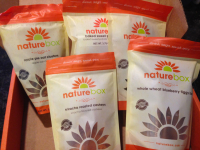 This post is sponsored by NatureBox. As I have previously, excruciatingly, thoroughly documented, my children are hollow. Possibly hobbits.They are never NOT HUNGRY. They eat and they eat and they eat. An entire box of cereal can be emptied by the end of breakfast, and apparently fully digested an hour later, which is when they start pestering me about lunch. Can I have a snack? Is dinner ready? What's for dessert? Last night, after a dinner of fish, sweet potatoes and corn, they finished off all the ice cream in the freezer, and THEN mass-demanded the peanut-butter-and-jelly sandwiches I'd just finished making for their lunchboxes. Fine. I'll make more. Just don't eat me. (In other words: If I'm asked to do a sponsored post that involves me getting free food, I'm going to hurl myself at said sponsor and hug their leg while quietly weeping on the floor. Save me! Feed them!) So let's talk about snacks. So, so many snacks. When Noah was little he liked to ask for "a tiny, tiny snack" while scrunching up his face and pinching his fingers together, supposedly to represent the minuscule tininess of the snack he was requesting. Just a few bread... Read more →

Every Morning There's a Halo

Noah woke up this morning convinced that he and his dad were going to play Transformers together. I'm not sure where the idea that he'd been promised a pre-breakfast playdate came from, since our typical weekday mornings are not exactly padded with a lot of downtime. It's more like: Alarms go off, feet better be hitting the floor. Pajamas off, clothes on, bodies downstairs. Mom to blearily follow and promptly brew the coffee using the power of muscle memory. And then it's a sea of constant motion and tasks with a wary eye on the clock at all times. But then this morning, seconds after Jason stepped out of the shower, a heartbreakingly impossible request: "Dad, you wanna play Transformers with me?" Meanwhile, Ezra was lying on his back in the hallway, buck naked and making floor angels, having apparently gotten distracted by the ceiling light fixture somewhere between "pajamas off" and clothes on." "Not right now, buddy," Jason told Noah, who of course translated "not right now" into "I'll be there in five minutes." He ran to his room to finish setting the toys (all Jason's handmedowns from the 80s) up for battle, shooing his brothers away because we... Read more →

It feels like the other two started school ages ago. Poor Baby Ike was our holdout. His school started today. After much back and forth and forth and back, I decided to enroll him in the school's full day option. He's not napping at home now that the crib's gone and my new job very much requires me to be working during those precious hours. He'll go to the "nap room" at school after lunch for some quiet/down time (GOOD LUCK WITH THAT, SCHOOL) and I'll pick him up in the afternoon, just before his brothers get home on the bus. I'm sure he'll be fine. But still. It's a lot of time away from him. And I won't have anyone to eat lunch with anymore. Boo. Speaking of lunches, three feels like a hell of a lot of lunches to pack. Good God. Is this life now? Every day? With the feeding and the coordinating? Here's what we're dealing with: Ike's school is nut free, Noah and Ezra's is not (unbelievable, but I'm not complaining). Ike's school provides free milk and a morning snack, Noah and Ezra both require beverages AND a separate snack for the classroom since lunch... Read more →