It feels like the other two started school ages ago. Poor Baby Ike was our holdout. His school started today. 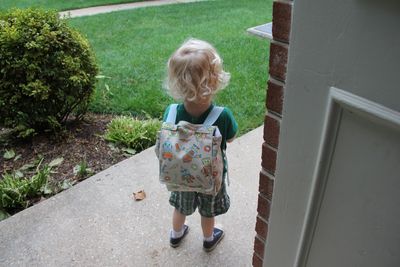 After much back and forth and forth and back, I decided to enroll him in the school's full day option. He's not napping at home now that the crib's gone and my new job very much requires me to be working during those precious hours. He'll go to the "nap room" at school after lunch for some quiet/down time (GOOD LUCK WITH THAT, SCHOOL) and I'll pick him up in the afternoon, just before his brothers get home on the bus.

I'm sure he'll be fine. But still. It's a lot of time away from him. And I won't have anyone to eat lunch with anymore. Boo.

Speaking of lunches, three feels like a hell of a lot of lunches to pack. Good God. Is this life now? Every day? With the feeding and the coordinating? 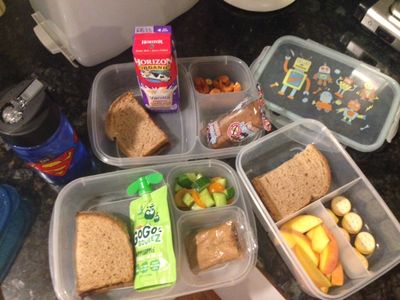 Here's what we're dealing with:

Ike's school is nut free, Noah and Ezra's is not (unbelievable, but I'm not complaining). Ike's school provides free milk and a morning snack, Noah and Ezra both require beverages AND a separate snack for the classroom since lunch is super early for kindergarten and on the late side for 3rd grade. The school-provided lunch options are apparently unacceptable and neither Noah nor Ezra will even consider buying instead of bringing from home. And then Noah hates getting fruits or vegetables or dinner leftovers, but that's pretty much all Ezra wants, and Ike falls somewhere in the middle on the picky scale, oh my freaking God.

I got a lot of requests for a lunchbox ideas post on Facebook and Instagram, which...sure! Just as long as you're not expecting some adorable painstaking bento box food p0rn bullshit. My kids want PB&Js (or sunbutter&Js) and pasta that comes out of a can. Anything else I can think to pack is a bonus, but the bar is admittedly pretty low. I'll see what I can come up with. We do have some good snack recipes we make in bulk and freeze, and I have a sponsored post coming up that I think (hope) you'll all dig. But I probably scramble around the kitchen for boring basics, boxed snacks and leftovers just like most people.

(Boxes are all from Amazon, since I also saw that question a lot. They ARE pretty great. I love not having to pack a million separate bags/containers for everything. These keep everything nicely separate and non-smushed, and seem easier for the kids to pack back up and NOT LOSE THE FREAKING LIDS. Noah and Ezra get EasyLunchboxes

and Ike gets the robot one from Sugarbooger

because it matches his Lunch Tote

. Because okay, I'm all "whatever, here's a damn sandwich" about the contents but COME ON THE ROBOTS ARE SO CUTE WHEN THEY'RE ALL MATCHY.) 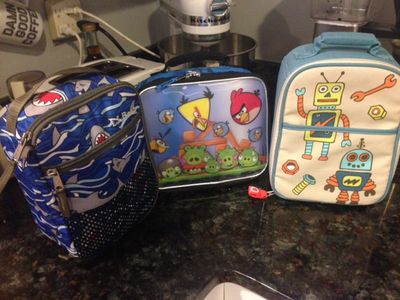 Anyway, they're all finally off and out in the world, lunchboxes in tow. 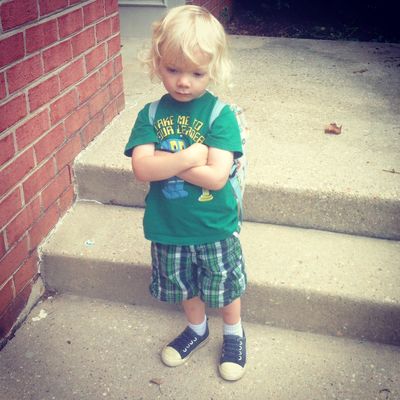 And Ike seemed really, really thrilled. Aw, cheer up, buddy. I'll be back for you soon.

(FYI: This is probably the best first day of school photo I've ever taken. I'm framing this shit.)

Gah! God bless you. I had to pack for 2 and I just about lost my mind and we quickly put my little one in a meal-included program at his pre-k.
There are not strict requirements for the 3 year-old and he likes grapes and sandwiches...but the pre-k we formerly attended required a fruit, a veggie, dairy, protein and starch. They did not allow peanut butter and I was losing my mind over items he would eat cold because they did not warm anything.

I was also packing for myself on weight watchers so...I guess I was packing for 3. I wish you well...I could not handle it. :)

GoGo squeeze FTMFW! My youngest loves it so that's his afternoon snack. Also am LOVING the fact I can pack him a peanut butter sandwich now. Yay for school.

I am so thankful our preschool heats up leftovers. That's what our kid gets most days, plus a container of yogurt & fruit (or just fruit) and shelf-stable applesauce. I'd lose it if I didn't have a pattern to follow.

I know its lazy but my first grader loves popcorn as a snack. I microwave a bag, put some in a baggie and eat the rest myself! Oh and she totally digs cereal for an at school snack too. Captain crunch hasn't let me down yet

Just had to say...LOVE his shirt!

While I may not have the same sentiments when the day comes that I send my last baby off to school, right now I would gladly pack twice as many lunches as needed to have sometime to myself each day.

While I may not have the same sentiments when the day comes that I send my last baby off to school, right now I would gladly pack twice as many lunches as needed to have sometime to myself each day.

We were the mean parents that forced our kids to eat school lunch. If they didn't like the hot option, they had to have sunbutter. My daughter is a senior this year & she plans & packs her own lunches. My son is a freshman & will eat whatever is put in front of him. Just thinking about packing lunches stresses me out: will they eat it anyway? will they lose dishes or the lunchbox? etc, etc.

You ARE a scrapbooker at heart! I knew it!! First it's a picture in a frame and before you know it, you've got eleventy gozillion scrapbooks laying around!

I sent my oldest off to kinder this year and I am totally in love with the Yumbox lunchbox. It has 5 separate divided compartments (but no separate lids) that are labeled dairy, veg, fruit, grains, protein. I think it's designed to teach kids balanced eating, but it really makes packing lunch a ridiculous no-brainer for me. I also love that there's no trash/baggies/containers to lose and he can manage the latch on the box easily.

Today he got 2 Babybel cheese (one for snack), strawberries, carrots, crackers and deli turkey (okay, fine, I used a mini cookie cutter to cut the turkey into heart shapes). DONE AND DONE.

He's actually not a PB&J fan so no love lost there.

oooh... i'm gonna get one of those lunch containers and totes for my kindy kid! thanks for the tip.

What is saving me, when I can get my ass together to actually do it, is to make a list day by day of who gets what. My husband and I both do lunches and it makes it SO MUCH EASIER than trying to put it together when we're bleary and dealing with the kids who won't get up and the dog who just barfed.

That is indeed the best first-day-of-school photo ever! Oh, Ike. It's okay, little dude!

I hear you on the lunch-packing. Every damn weekday, and I only have two kids. One of them is a preteen though and he eats enough for two more kids. Anyway, it is so crazy-making to be sure they both have stuff they'll eat, that's within the schools' nut policies, that is easy to pack, and and and. Neither one is willing to try the school lunch option but oh, how I wish they would.

I am still really freaking jealous that your boys eat sandwiches. I have to boil a goddamn egg! (Okay, yes, so I do a batch of three or whatever, so I only have to do that part once a week.) But still! I have to peel it! And buying lunch isn't really an option either, because Lily's school "strongly prefers" kindergarteners to bring lunch.

Tell me more about this pasta in a can.

But he's practically a FETUS? It cannot be.

And seriously, praise be for a normal looking lunch box. I follow lastnightsdinner.net on IG and I mean, I love Jen - but dammit lady - all fresh figs and lovingly cut up melon balls all over the damned place. I can't even manage packing a salad for me. My mom moving 10 minutes from my job was the best thing to ever happen to my lunch game.

DontBlameTheKids: did you know you can bake eggs a dozen at a time in a muffin tin? The peel often comes off MUCH easier too. Google it!