There and Back Again

So I went away for a few days there to a conference in Santa Barbara, California. A non-blogging, non-just-an-excuse-to-squee-and-party conference, where I actually spent every minute of my time either in conference sessions or in a semi-circle with coworkers while we worked and planned and over-strategerized our marketing funnels.

At night there was good food and even better wine, but still like, Business Wine. (You know, where every delicious sip must be weighed against the ever-increasing odds of Saying Something Dumb or Regrettable in front of work people.)

Overall, it was pretty uneventful. I didn't show up at the wrong airport or lose my luggage or cause any sort of international incident. I didn't get much sleep or free time, and the entire trip sort of faded into a hazy, four-day quest for either decent coffee or a place to charge my phone.

On the flight out, the middle seat in my row was empty. A pregnant mom with a baby in her lap asked the woman with the aisle seat  if she'd possibly consider switching to HER aisle seat just one row up, so she could put her daughter in the empty middle seat.

The lady refused. She didn't want to move, because she'd already plugged her phone into the outlet under the seat.

NOTE: I plugged her damn phone into the outlet under the seat, because she couldn't find it, and my offer of guidance help ultimately resulted in me getting down on all fours on the floor, with my ass wedged between the seats while stabbing blindly at an outlet located directly behind her calves.

Sp I offered the mom my window seat. (I like aisles better anyway!) She climbed over the One Does Not Simply Unplug An iPhone lady and silently mouthed teary thanks at me. I felt quite zen and noble. We were all going to be kind to one another on this flight, so help me God. Don't make me live-tweet a bitch.

In the end, though, a whole other seat swap/trading thing happened so another family with small children could all sit together, and the middle seat next to me ended up empty ANYWAY. Then the first baby screamed for about three solid hours of the flight. My original seatmate shot me a few dirty looks, like it was all my fault, while I put my headphones on, feeling less zen and noble and much more GOOD. SERVES YOU RIGHT.

My coworker took this photo of me. I texted it to Jason and told him to tell Noah that I was hanging with Ben Franklin. 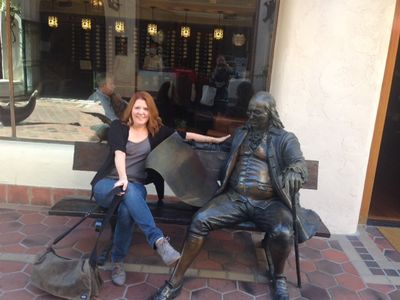 Nine years old and already completely over my sense of whimsy. Go home, Mom. You're lame.

I got back laaaate Saturday night and still have no fucking idea what time it is. I brought the boys chocolate bars and a box of peanut brittle, and then accidentally somehow maliciously ate all the peanut brittle. They didn't seem to mind and were all very, very happy to see me. "We can kiss each other now," Ezra exclaimed. "Because I'm in love with you again!" 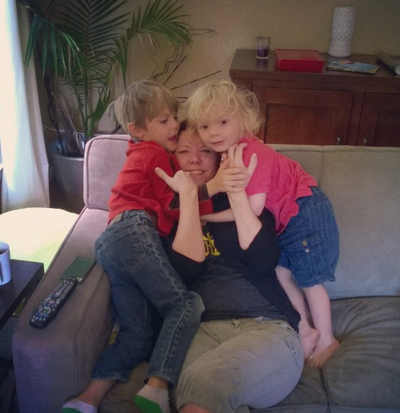 There were a lot of pile-ons and head hugs. It's good to be back.

Well done on the plane.

I can't imagine not getting up for that fellow Mom.

Do you mean you managed a trip without damaging your feet/shoes? Well done!

It's so awesome when you get to see Karma in action, right then and there, instant gratification. I seriously can't imagine saying no to someone in that situation. (The poor mom on the plane, I mean.)

And then my 11 yr old asks why Ben looks so uncomfortable. Is he bracing himself? Is he about to stand? WHY ARE HIS LEGS SO WIDE? Children ruin everything.

Kid reunions are the best!

Just wanted to make sure you knew you got a sneaky shout-out for fake Beyonce phone calls from Jessica Williams on The Daily Show. Her whole bit was great, but you need to pay extra attention around 4:35 http://thedailyshow.cc.com/videos/5ndnit/jessica-s-feminized-atmosphere.

I choose to believe she knew your karate story.

Sorry for an uneventful conference, but I hope you enjoyed the beautiful city somewhat.

Okay so I am totally about to ask you something and I promise PROMISE I am not trying to be a Shitty McShitPants, but did you do a slide show movie thing for Noah's birthday? I'm wondering if I missed it. More than likely you just haven't gotten to it yet or you're busy and just want to tell me to Screw Off. Which would be totally acceptable. But anyway, just wondering. ;)

"I'm in love with you again!" Ezra is soooo cute!

He's in love with you again, awwwww... Absence/heart/fonder. xoxo

1. I was no joke halfway through the 8th paragraph and thought "Hope that baby screamed its damn head off." Yes....

That last pic is pure happiness!

I so love happy endings, like a baby screaming for 3 hours into the ear of someone who refused to move.

WAH, how is baby Ike so big?

I totally drank too much of the business wine (and beer, and maybe shots?) at the last Christmas party I went to at my last firm. I was very relieved that I found some strangers to talk to at the after-party at the bar because Lordy, it would not have been good if I had to speak to any of my superiors. Not good at all.

I am so pleased about that story with the crying baby, although it is tinged with sadness for the mom, who was probably mortified the whole time.

You should be ashamed of yourself, showing that poor, innocent little baby my picture so it would cry like that.

I love reading your blog - you manage to capture a lot of my days with my four tiny people perfectly. Important stuff though, how do I subscribe? The subscribe link really doesn't work for me.