I totally bought Ezra the wrong Transformer for his birthday. He wanted Prowl, the Autobot, Battle Masters edition; for some reason this translated in my brain to Strafe, the Technobot, Construct-Bots edition.

I still have no idea what at least seven or eight of those words mean. Lesson learned, though: Strafe is blue, while Prowl is yellow. But not like, Bumblebee yellow. Also, Battle Masters don't actually transform into anything, which, okay, I give up, these toys are stupid.

(Which to be fair, probably took me 20 minutes, because the toy was literally roped to the box in about 15 different places and then the box was coated in about three layers of packing tape just for good measure. HELLO ADULT AND YOUR CLUMSY MEATHANDS. I AM HERE TO MAKE YOU FEEL IMPOTENT WITH RAGE. ALSO, I BET I REQUIRE BATTERIES THAT YOU DO NOT HAVE. BEEP BEEP BOOP, ASSHOLE.)

I took the kids to a pumpkin patch and bought each of them a pumpkin. Which they all refuse to let me display in any way, but instead insist on keeping the pumpkins in their rooms, IN THEIR BEDS. So they can sleep next to them, and pet them and read them bedtime stories.

It's decorative gourd season, motherfuckers, and it's super duper weird.

Speaking of the fall season and its related accessories/holidays, this is the first year that I got absolutely zero say in any of my children's costumes. I knew Ike probably wouldn't let me go for another obscure hairz-related costume like Doc Brown again, but I thought I had a decent chance of selling him on being Thor, at least.

Nope. He's going to be a goddamn Ninja Turtle like every other child on earth, including Noah. Which Ninja Turtles are they going to be? WHO KNOWS. WHO CARES. The blue one and the red one, I think. I don't know. They'll both be wearing masks the whole time which means I will probably end up trick-or-treating with someone else's kid by accident at least once or twice.

I opted to not order the plastic weapon accessories for the turtle costumes, thinking this would spare me some agony and eyeball injuries, but in reality it just means Noah and Ike find makeshift weapons around the house, like pointy sticks and heavy, skull-crushing handweights. Good job, Mom! 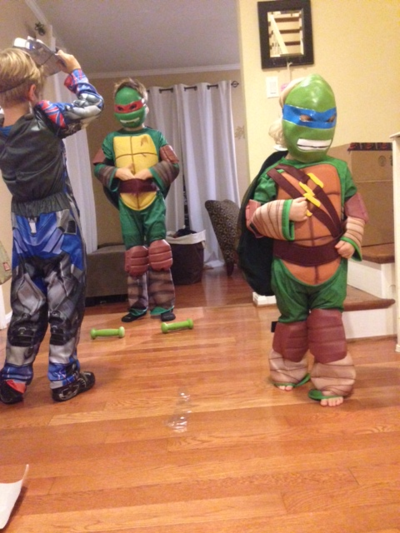 Ezra is going as Optimus Prime. The fact that it's a technially supposed to be robot costume, but is still padded in the arms and chest to mimic human musculature suggests that the kids' costume industry really isn't even trying anymore.

I've also had to repair all three costumes already, since the boys keep putting them on over their pajamas at night and trying to sleep with them on. So the pumpkins in their beds feel seasonally appropriate, I suppose.

Ha! My 2-year-old daughter keeps trying to bring her pumpkin to bed as well. Good to know that she's not the only one.

We had to create a rule that no accessories were carried for trick or treating (swords, army guns, what have you) because after the first 20 minutes, Mom was stuck carrying them.

Mom did carry an empty backpack for dumping candy out of the tiny decorative pumpkin, so I wasn't a total buzzkill. Won't carry weapons but will haul candy!

I hid my son's costume because I feared it would be destroyed before Halloween. In pumpkin news, my husband ordered me the McSweeney's "It's decorative gourd season, motherfuckers" coffee mug.

My son is also a Turtle this year, the red one. That's Rafael. He's the angry one and voiced by Sean Austin in the cartoon, FWIW. Grandma bought the costume a few weeks ago and we had a battle royal over when and where he was allowed to wear it. I won, eventually. But as I left the house this morning he was grappling in his closet for the sais that came with it. I suspect there were some ninja moves busted out on Dad after I left.
Previous to owning this costume, he and his friend at school had the idea that Son should dress as a peanut for Halloween. Wait, hear this out. Friend is going to dress as a Samurai and if Son dressed as a peanut they could have a fight and it would be "so funny." I cannot argue with that logic. I would like to see a peanut fight a Samurai. But now he's a Ninja Turtle, so slightly more evenly matched. I guess?

I hate that fake musculature they put in costumes. I don't care if superheros have big muscles, presumably princesses have busts, and we don't put fake boobs on little girl costumes, do we? The costume is the fantasy. Fake muscles look like little baby body dysmorphias to me.

Pumpkins in the bed, I can get behind. Wasn't it Noah that used to carry vegetables around?

I wish I lived near you - I suspect we'd be friends.

My 3 yr old daughter has, for the past week, worn her Minnie Mouse & Princess costume dresses over her regular clothes. She refuses to take them off, so we went to Famous Dave's, my OB's office, Walmart and a variety of other places wearing a pink sparkly Princess dress. This in it's self wouldn't be so bad, but every time someone comments on her appearance or clothing she growls/screams/cries/or stomps her foot at them. I tried explaining that by wearing a costume on any day that wasn't Halloween she'd be drawing attention to herself, but 3 yr olds don't get that shit.

Oh and she has her decorative pumpkin from Grandma in her room too, thank God she hasn't tried to sleep with it yet. Though I wouldn't be surprised if she tried soon.

We're on TeamNoHairCut and our 2 yera old guy has blond ringlets of super high, poofy bigness. We are floating him going as the New Year Baby.

I was super excited to recycle the Ewok costume, but alas, the baby refuses to come within 10 feet of it. Every time we mention trick-or-treating, she starts screaming, "No ewok! No ewok!" I think we scarred her.

My 5 year old is going as the Red Ninja turtle (no psis because HELL NO). I was hoping against hope that he'd choose a character from the Lego movie but there are no costumes and what's up with that? For the first time ever, all of the decorative gourds remain outside. I might throw a party to celebrate. And yes, the non-transforming Transformers kind of, you know, COMPLETELY MISS THE POINT.

I was super excited to recycle the Ewok costume, but alas, the baby refuses to come within 10 feet of it. Every time we mention trick-or-treating, she starts screaming, "No ewok! No ewok!" I think we scarred her.

Please, please, please make Thor happen!!!!!! Doc Brown was awesome but I suspect Thor would be awesomer (it's a word)!!!!

This year I'm super excited because 8 year old niece has discovered that 'gross and scary' Halloween costumes are more fun than sparkly pretty Tinker Bell costumes. Soooo picking out a costume with Auntie has become a BLAST! But, I'm totally down with Ninja Turtles and Transformers. But is it just me, or do Ninja Turtles now look WAY DIFFERENT than the Ninja Turtles from when we were kids? (which for me was late '80s)

In related weirdness, my son insisted on sleeping with the vacuum cleaner in his bed when he was three. And also was obsessed with ninja turtles. Little boy traits?!
But I think it's kinda sweet that they're still so popular. And if they're still around in another twenty years I think you just might, too :)

I thought of you two days ago, because I dressed my kid (10 mos) up as Marty McFly and then was all, I could be Doc! my husband could be Biff! I don't have to buy ANYTHING!

And then the kid proceeded to rip off the vest and denim jacket the second they were on his body. So he gets to be a hand me down lion. RAWR.

And I thought mine were the only children that got emotionally attached to gourds. My 7yo cried honest for-real tears last year when it was time to throw out his oozing, moldy mini-pumpkin gourd. He will likely cry again this year, too.

What did you just call your kids?

Wanting the pumpkins in the bed are making me laugh because my daughter is doing the same thing. She brought one home from Afterschool all decorated with a glued/drawn face, and then she wangled another couple small ones to make her "family." She distributed one eye each and lots of sticky paper and glitter. The cyclops pumpkin family thankfully lives *next* to her bed, and not in it!

I think there must be a memo going around, because my 3.5 year old keeps insisting that he wants a pumpkin for his room. We haven't gotten pumpkins at all yet, so this is an unfulfilled want, but good to know other kids are also doing it.

I have 2 boys and I love you. I was just sighing as I turned on Pokemon this morning after refusing to let my son play video games at 6:30 in the morning. God I wish I gave a shit about this boy stuff. It would make it so much more tolerable.

Actual conversation with my husband.
Him: What are those?
Me: Nunchucks. They go with his costume.
Him: And you thought it'd be a good idea for this one to have nunchucks?
Me: They go with his costume. How can he be a nunchuckless ninja turtle?
Him: He's gonna fuck some kid up
Me: HE'S NOT TAKING THEM TO SCHOOL!
Him: So he'll be a nunchuckless ninja turtle only at school? Some mother you are.
Me: I am so gonna leave those bitches at the bottom of the steps for you to FIND with your feet.