Noah decided a couple months ago that he wanted to be a Ninja Turtle. He didn't know which one, and lately being asked to make a choice between several options or to pick a "favorite" really stresses him out, so we randomly picked Raphael for him. And Leonardo for Ike by mistake; he asked for Michaelangelo but I screwed it up and bought the wrong one.

(I am getting really terrible at this stuff; a selective form of toy-and-cartoon-related dementia, or just a willful ignorance to hand over my remaining precious brainspace to the names and rich cross-merchandizing backstories of loud and obnoxious cartoon characters. Meanwhile my children want to talk about absolutely nothing else besides Teenage Transforming Mutant Ninja Angry Birds. Or something. I dunno. I'm rereading The Hunger Games, get off my lawn/battle arena.)

Noah and Ike were thrilled with their costumes, at least, and Noah was especially comfortable wearing his and pretending to actually BE Raphael. Still not a big fan of Halloween decorations, either on houses or in stores, but considering the nearby mall hauled out Christmas decorations a few weeks ago, we didn't really have to deal with that particular fear all that much. He did great and I'm super proud of him. (This costume [and Ike's] came with a complete set of knee and elbow pad things. By the day of the school Halloween parade, we were down to just one because the boys decided to use them as weapons [which the costumes did NOT come with, and I did NOT buy separately because I'm not an IDIOT] and the velcro all ripped off. This is why you can't have nice things, kids.) 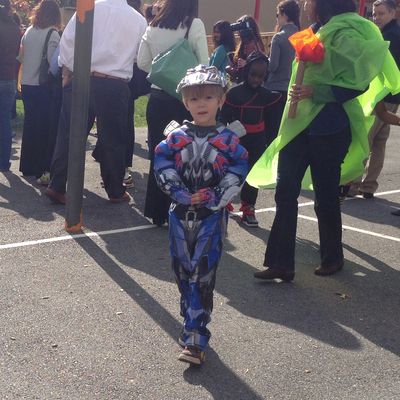 This was Ezra's first time marching in the big elementary school parade. 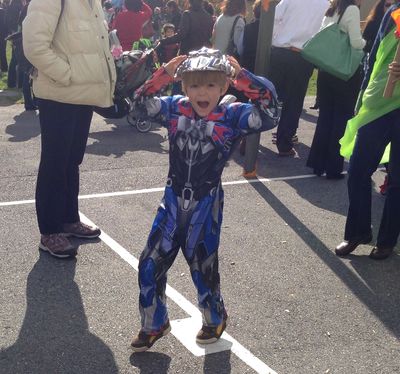 He was pretty excited to see me. 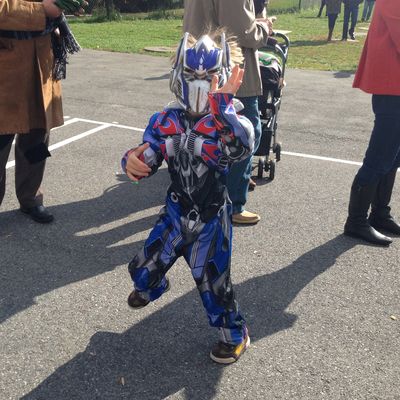 And definitely seemed to dig the pageantry of it all. 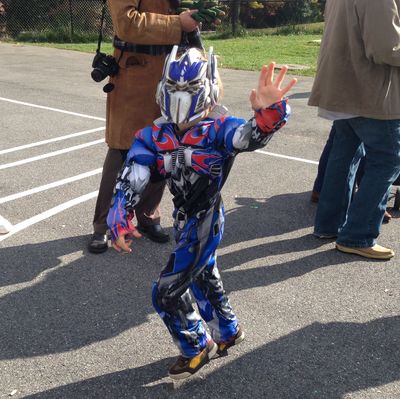 His parade wave game is on point.

(Semi-relatedly: If I'd taken a shot for every Ninja Turtle, Optimus Prime and/or Queen Elsa in that parade I would have died of alcohol poisoning by the time the second graders marched by.)

Our neighborhood had a second "parade" on the afternoon of Halloween proper and encouraged everybody with kids or pets to join in. The problem with this plan was that 99.99999% of the neighborhood residents have either kids or pets or both, which meant there was a fairly decent turnout of parade marchers, but only like, four people left to stand on the sidelines and watch.

It made for a slightly strange, quiet sort of meandering around a few blocks. Especially since every child optimistically brought a bag or bucket for candy distribution and only two of the four parade-watchers had anything to give out. And then the parade broke up into two separate waves because toddlers are very slow marchers, especially when they are confused as all hell as to what is happening here. 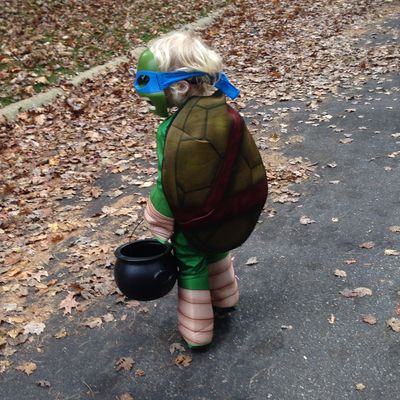 The HOA had treats and goody bags for everybody at the end of the parade route, which was super nice. Ike took his and then promptly collapsed shell-side down in a pile of leaves from exhaustion. 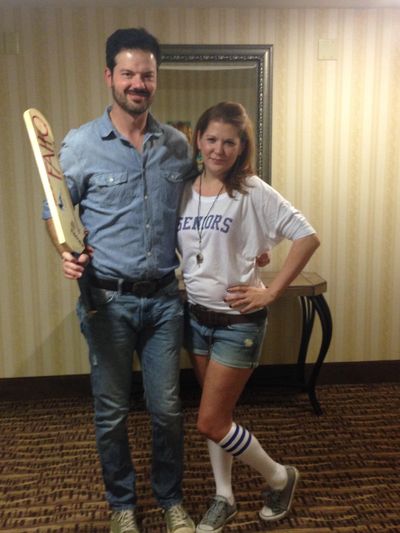 Jason and I dressed up for the parade as well, in the costumes we put together for a grown-up Halloween party the week before. The recognition rate at the party was pretty high, but not so much at the neighborhood thing. Although now a few of our neighbors seem to think we can offer them some pot.

You did not just tell me Dazed and Confused is 21 years old. Do I get to sign up for Social Security now?

WAIT, Dazed and Confused is 21 years old? BRB, going to go cry into an adult beverage.

Yep...dressed my two-year old up as Billy Idol. Only "people of a certain age" got it, but the other people aren't cool anyway!!! You guys look awesome...all five of you!

I only saw this movie -- for the first time ever -- like a month ago, so I knew who you were immediately. I was never allowed to watch "Dazed and Confused," so somehow I was 31 for my first viewing.

I'm an absolute creep - I'm 16 weeks pregnant and I found your week-by-week pregnancy updates on AlphaMom...decided I wasn't getting enough Amalah, so (rather than study for midterms...cough) I went back and read ALL of your blog entries. Took me three weeks. I regret nothing.

I swear to God that my first thought when I saw the picture of you and Jason was "why is Amy posting pictures of her husband with this young tart?!" Then I realized it was YOU! Congrats on looking young....and tart-y! ;)

O'Bannion!! And Darla I think? I love it!

I think I watched this movie about 852 times during high school. That's a conservative estimate.

And your children are adorable as always.

The reward chart is working, girl. You guys are smoking!

Yours and Jason's costumes are AWESOME.

I had a Leo as well. She was so into it.