Facing My Fear Straight In Its Horrible Lava Face

So a few Christmases ago, Jason thought it would be "funny" to buy me a DVD copy of "Hill of Fire," the infamous Reading Rainbow episode that inadvertently triggered my lifelong phobia of volcanoes. He figured I — as a mostly reasonable, somewhat mature adult — would be able to watch it, laugh about it, maybe get a good blog post out of the experience, like the time I watched a terrible reenactment of Pompeii. Maybe it would even help!, he reasoned.

I never managed to write that good blog post because I never made it through the entire show. He put it on and I kept having to leave the room. It was just like I remembered, and for some reason the realization that my childhood memories weren't NEARLY as warped as I assumed made the whole thing worse. It wasn't funny. It was HORRIBLE, and Jason learned a valuable lesson about maaaaaaybe taking people's most irrational fears a bit more seriously, and that no, I really wasn't making things up or exaggerating the depth of my volcanic terror: That show fucked my shit up proper, dude.

Well, he learned that lesson for awhile, and then apparently forgot, because recently he went through our old DVDs and OH YOU KNOW WHAT WOULD BE FUNNY? 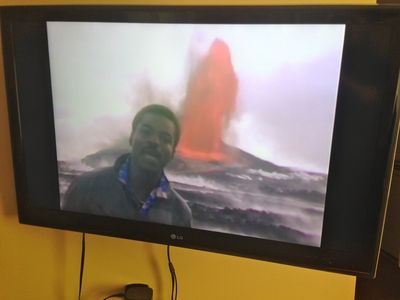 That man, my beloved husband, my one true confidante, my best friend in the entire world, called the three male heirs my own body produced for him into the living room and put "Hill of Fire" on for them. And me, because I was already sitting there, and now had to make a choice:

1) Flee the room in a flailing panic, and thus abandoning my children and simultaneously letting them know that what they were about to watch was terrifying and their father was a giant dickhead.

2) Stay and watch, and possibly provide some of the context/reassurance that my own seven-year-old self could have used, like "I SWEAR LEVAR BURTON IS ACTUALLY FAR ENOUGH AWAY TO NOT DIE" and "I PROMISE YOUR BACKYARD WILL NOT RANDOMLY COLLAPSE AND TURN INTO A FIERY PIT OF DESTRUCTION."

I went with option 3), which was to stay frozen in my chair in a silent full-body, muscle-spasming panic, glaring at Jason. And then attempting to calmly answer my children's questions, which were:

But I stayed. And I watched. I held (a somewhat alarmed, vaguely unsure) Ike on my lap and stroked him calmly, even as my skin crawled and twitched at the close-ups of the spewing lava and roiling magma. I watched the entire episode, including the book reading part about the Paricutin volcano in Mexico, which started as a small hole in a farmer's field and then went on to destroy the entire village as a full-fledged, honest-to-God, take-no-shit volcano.

(The book helpfully points out that the village was safely evacuated, including all the farm animals, except LIES — three people died from lightning strikes caused by the eruption, so like, there's something else you get to worry about now.) 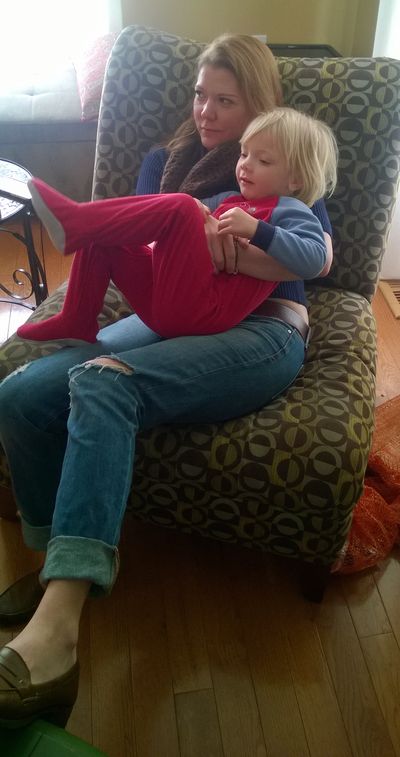 Afterwards, the boys asked a few follow-up questions (are there volcanoes in Maryland, have we ever been to a place that has/had volcanoes, tell me again about the science of it all, etc.). They really liked the segment about a chill Hawaiian dude who makes pottery using volcanic ash and soil. Ezra asked once more about LeVar Burton's safety and Noah pragmatically told him not to worry, they watch Reading Rainbow at school all the time and LeVar is just fine in all the other episodes. (Thanks, Kickstarter!) Nobody had any nightmares about volcanoes that night or since, nor did anyone inherit my childhood OCD of checking our yard for possible volcano holes for weeks on end.

So they're fine. I'm fine. We're all just doing fine. I'm even a little bit proud of myself, and maybe a little slightly less phobic and/or thoroughly convinced that a volcano will be what kills me, in the end.

(But you don't have to take my word for it.)

(I AM NEVER WATCHING THAT AGAIN.)

No lie, I read a book on Hawaiian volcano's in 2nd grade. Terrified me, all mountains were going to erupt. You are not alone.

I am completely terrified of kitchen knives because of an episode of "Rescue 911" I watched as a child where someone broke into a house and stabbed a lady with a kitchen knife. Blood smeared all over the walls. Horrifying.

Okay volcano scary yes, of course. But that CHAIR. Where did you get that CHAIR?

Gawd. My husband decided to share his completely over the top fear of tornadoes with our six year old last year and now every night EVERY NIGHT I have to tell him lies about how there are never tornadoes in Alaska and our state.

The things we'll do for our babies. Good on you girl.

Willy Wonka and the Chocolate Factory gave me nightmares when I was a wee kid (ok, for years). The Oo--- Loo--as STILL freak me out. So when my mother insisted that I watch it again in my 30s, I reluctantly gave in. OK, OK, it wasn't as SCARY as I remembered (maybe they edited those parts out!?), it's still a horribly creepy movie. Horrible. Creepy.

Watching it again helped. A little.

No lie here either. I learned about volcanoes in 3rd grade, which would have been 196FOUR!, and was terrified for years.

Just a few weeks ago, I went with my husband and adult children to the Big Island of Hawaii. We took a helicopter ride. Kilauea was so beautiful from above that tears came to my eyes.

Not afraid any more.

At age 7, my big sister took me to see Murder By Death. That movie traumatized me. I was terrified. Moose heads on walls in particular made me panic.

Fast forward 20 years, I watched the film again, and it was HILARIOUS. It made fun of all my most beloved mystery detectives. It was wonderful.

Still afraid of moose heads, tho.

I was COMPLETELY traumatized by Stephen King's "IT" as a kid, still won't go near a gutter. I told my partner about it and she did the same thing, she went out and found it. The production values are awful, the ending is laughable. I'm still scared of clowns THANKYOUVERYMUCH.

I had completely forgotten about this episode of Reading Rainbow until just now. I was petrified of volcanos for the longest time after watching that episode. My family and I made a trip to Hawaii a few years later and I remember being scared of the "dormant" volcano just up the beach from our hotel. I bet you've never watch Dante's Peak. It's equally terrifying, but way more gory.

Wow. Now I'm reading about volcanoes and I'm starting to freak myself out a bit. There are many ways you can die from volcanoes.

Okay, my biggest takeaway from this is look how cute you are while you cuddle a kid and watch a scary TV show! You have on a belt! And shoes! You look so put together. I mean, you ALWAYS look cute and put together, this is coming out all wrong. What I mean is that I'm ashamed of my propensity for changing into pajama pants and old t-shirts as soon as I cross the threshold!

This post is especially delightful to me because my husband's NUMBER ONE GREATEST FEAR is "lava," ALSO because of that particular episode and it had literally never occurred to me until now to find it and buy it and bring it into our home to torture him. I am very excited.

I'm with Candace, LOVE THE CHAIR. Also, sorry about your volcano fears. :)

I have an irrational terror of Volkswagon Beetles due to watching Herbie the LoveBug when I was very small (yes I am that old). Beetlefobia? So I can understand the volcano thing, because volcanos are scary all on their own, without a TV show to fuel the imagination.

So, I totally think you should move and be my neighbor because you are hilarious and your kids are awesome and Jason seems cool, too....but we live in Hawaii. So don't :). On the plus side, Hawaii volcanoes are relatively chill not explosive (she says, as 2 hours away a town is slowly being over run by lava).