Due to my delicate condition, I outsourced the yearly trek out for the Mall Santa photo to my husband and mother-in-law last week.

I shuffled around semi-usefully just long enough to get the boys in sweaters — as "sweaters" are about as close as we get to "dress clothes" around here, since collared shirts require ironing (fuck dat), and everything else they own proudly features a) a garishly colored, licensed cartoon character on it, b) some sort of orange-y red Mystery Stain, or c) both.

So! Sweaters for everybody! Or...wait...unless... Crap, does everybody even own a sweater at this point?

Turns out, they do! I was amazed. They all even seemed pleasantly coordinated, which...huh.

A few minutes after they walked out the door, I realized that I'd just sent at least two children out wearing the same sweaters they wore in last year's Mall Santa picture, because that's the last time I gave a crap about sweaters. 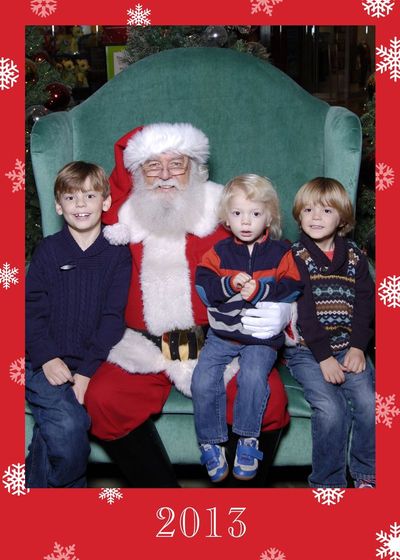 Note that I possibly bought them those sweaters while they waited in line with their father, ripping tags off and shoving them over their heads while all around us, families arrived with children in velvet dresses and sport coats and tiny babies in bow ties. 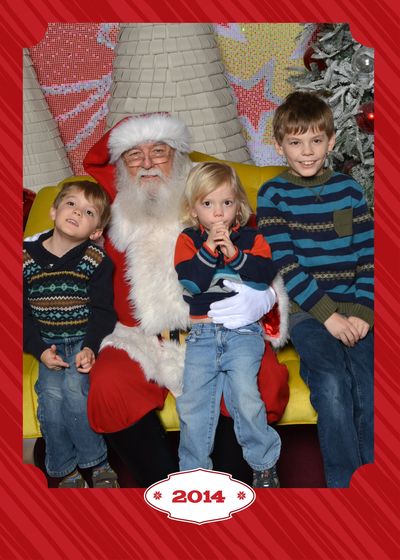 You can tell because it says so right there, and because this is probably the most awkward photo yet, as we've officially been carrying this nonsense on far too long and who gives a shit?

Also Noah is wearing a different sweater, because I studiously rejected it at the last minute last year because I thought it introduced one pattern too many to the composition. Seriously. That was a conscious thought I had and a decision I made. Why didn't anybody tell me how desperately I needed a hobby, a higher purpose, or at least a hip flask?

I'm surprised that sweater still fits, seeing how Noah now appears to be a good foot taller than ol' Saint Mall Nick himself.

When Jason got home and handed me the photos, he watched my face for a minute before volunteering that actually, this was totally the best one. Ezra kept trying to make finger guns at Santa, Noah couldn't keep his eyes open (THAT'S MY BOY AND/OR MY EYELID GENES), and Ike made that same face in every single photo because they later realized he'd taken two miniature candy canes instead of one, and was hiding them both in his clenched little fists, while his big, guilty eyes betrayed him with every flash of the camera.

Oh Mall Santa photos. You are the worst and also my favorite, because every year there's a story and every year the story gets weirder and more hilarious. To me, anyway.

I will force this ridiculousness on my poor children for as long as they'll possibly endure it, mark my crazy words.

We went to this Santa this year also. He was so unfriendly. And you can even see his unfriendly face in the 2014 picture you have versus the 2013 pic.

Ezra making finger guns is the best part of this story. No wait, it's the stolen candy cane. No, wait...it's all awesome!

Finger guns and candy canes! You REALLY need to be scrapbooking!

My sister and I have 29 years worth of Santa photos. This is the very first year we have not been able to do it - seeing as we now live states away, and we were quite bummed. One of my favorite thing is to go through the scrapbook my mom made and look through the years - we progressively get more and more embarrassed by it and then suddenly one year you can just tell we gave in and it became tradition. Now, its my turn to make my kids do the same and I love it for what you said - there is a great story behind each photo every year. :)
Merry Christmas Storch family - hope you have an amazing one!

I so can relate!
You are my Idol.
As a mother of two boys, at 4 and 7 now (how time flies), every time I feel a bit uncertain about something, I just look at what you have done, and alas, I do not feel alone anymore. "stupid only needs two to be normal" :)

OMG!! Love this post. It is hilarious. You can see the mall Santa photo begin to devolve ... can't wait to see the progression in next years. Your boys are adorable BTW and the sweaters are nice. I hear you on the garish/stained clothing that our children seem to always wear. Oh well ...

Mall Santa doesn't change. How long has he been doing this? Have you compared to previous years? Same Santa?

At first I thought it was just an extra stripe at the bottom, but then no, I'm pretty sure I confirmed, Ike's sweater is totally a belly shirt.

We tried to go see Santa yesterday and by tried I mean got there and saw the line ohmygod the line and realized there is now a way to schedule your picture online so we are going back to day with an appointment. To see Santa. Yup.
However, I did realize that our "put on nice clothes!" meant jeans and the same polo shirts we used for family pictures this fall because we have the same stained/ripped/licensed character thing going on here but with no sweaters. At least the girls have dresses so they were easy. Of course we had to wrestle them out of everything when we got home to keep it clean for today's do-over.
All so we can pay $24.50 for a picture of half of our kids screaming. WORTH IT.

How the heck do the sleeves still fit? I'm sure it is because my daughter is only 2, but she has shirts that fit perfectly in September and the sleeves are now too short. I think she has crazy-long monkey arms (and probably not coincidentally, she's a climber)... I look forward to the days when long sleeved shirts fit for more than 3 months.