We took the boys to a Christmas tree farm this weekend. We came home with a very beautiful tree, a bag of kettle corn, and a gigantic sticky puddle of spilled hot chocolate all over the minivan.

Have you ever gone on a family outing, taken a ton of pictures and then realized — once you were home — that basically every photo you took is an outtake, with somebody being a weirdo in every single shot? Just me? 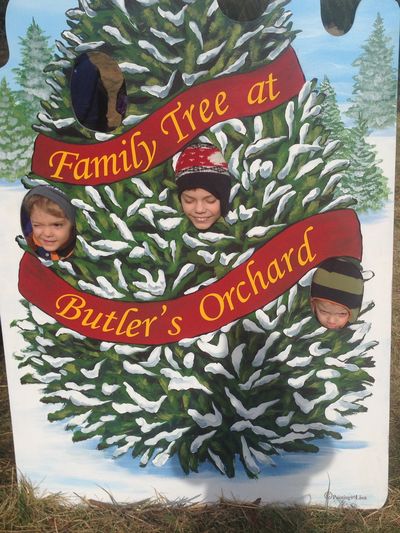 From L to R: Ezra's making a pirate face, Noah's eyes are closed, my hulking shadow is distracting, and Ike is... 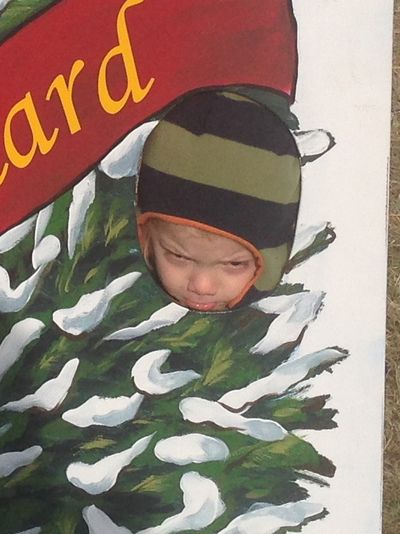 Oh, Ike is just LOVING this. 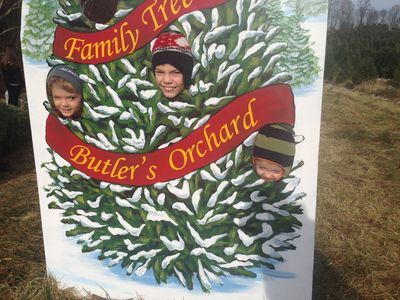 This time we have Suspicious Side Eye, Squinty Scrunch Face and Kid Who Smells Something Terrible. 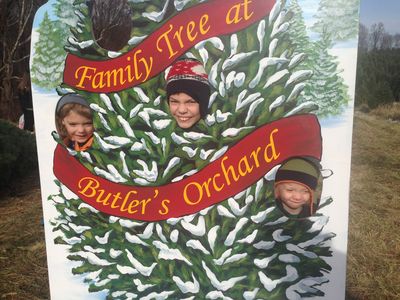 I don't even know what's going on with Ike's face in this one. Either the sun was in his eyes or this is honestly what he thinks counts as a "smile" these days: 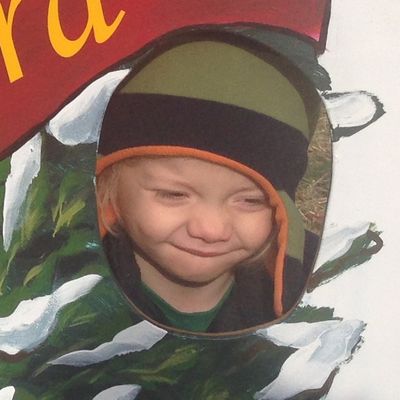 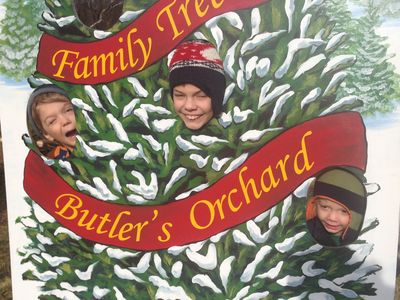 Ezra has now graduated to talking like a pirate, Noah is about to mime projectile vomiting because that's never NOT funny, and I think it just occurred to Ike that we're all pretending to be A BUNCH OF SEVERED HEADS IN A TREE.

(More of the same, minus additional points for at least one child removing his face from his facehole in every single shot.)

Group Photo in Front of Our Tree, Attempt #1: 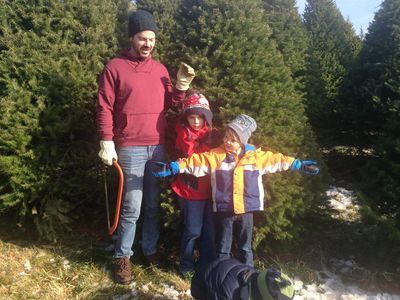 Group Photo in Front of Our Tree, Attempt #2: 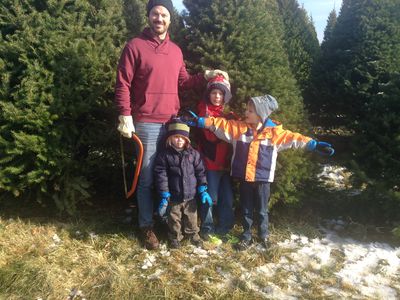 Okay, now we've got closed eyes, kid not looking at the camera, another kid still pouting about that faceplant from 15 seconds ago, and a mother who can't properly frame up a shot to save her life.

Group Photo in Front of Our Tree, Attempts #3-5: 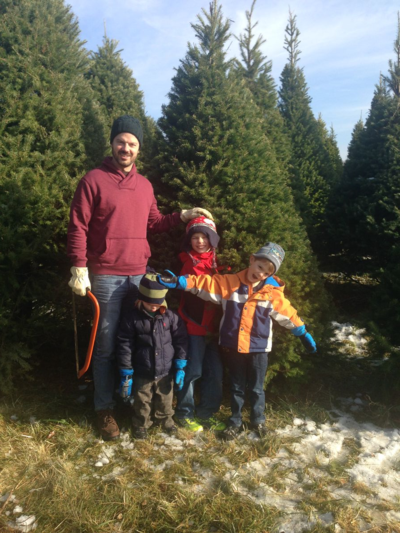 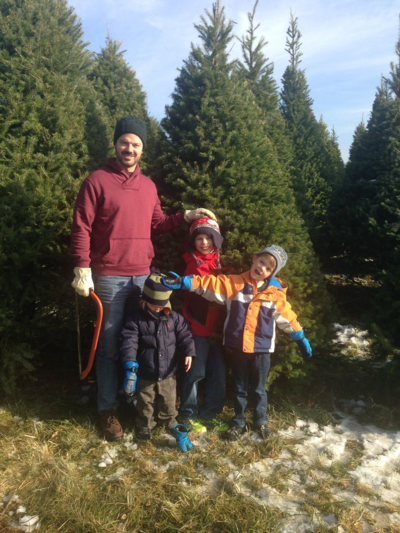 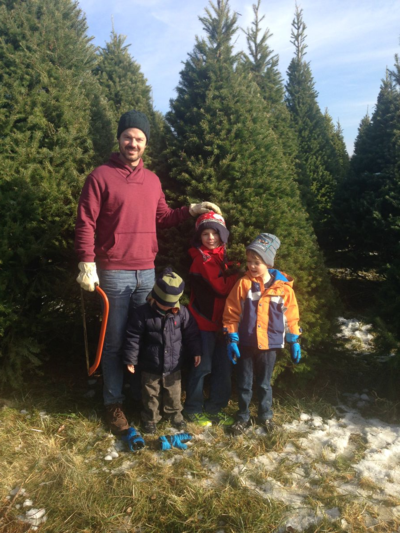 In which I did not realize Ike had such strong feelings about his mittens. Look at him. FUCK THESE MITTENS, he's thinking, while inexplicably tolerating a hat that is at least two sizes too big.

Ezra In the Tree Sled: 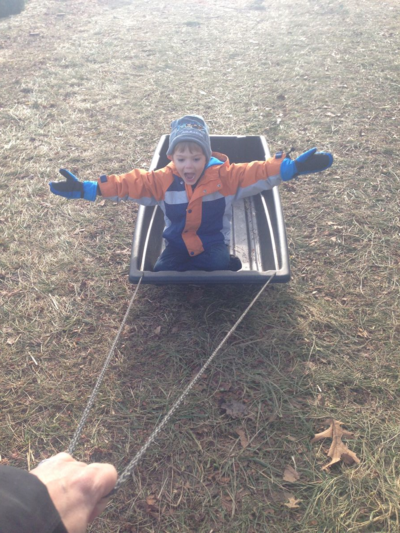 Actually, not a bad picture, although at this rate I'm never going to remember what he looked like at six years old without the big Theater Kid gestures. Also, this sled was covered in pine sap and it got all over his winter coat, something I didn't realize until this morning.

So one good photo = your child getting to be the "sticky one" at school later, and probably whispered about in the teachers' lounge, poor kid, where is his mother? I bet she's a lousy photographer too.

Jason Cutting Down Our Tree 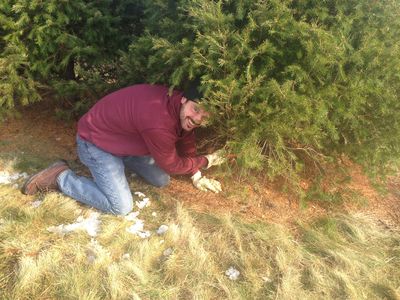 Also not a bad picture, just a total lie. He'd gotten our tree completely cut down by the time Ezra and I returned with the sled, so he posed for a staged photo next to this other random, lesser tree. I'm telling you the truth because I love you and I don't like having secrets between us, Internets. 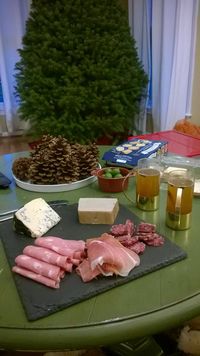 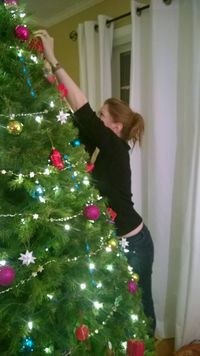 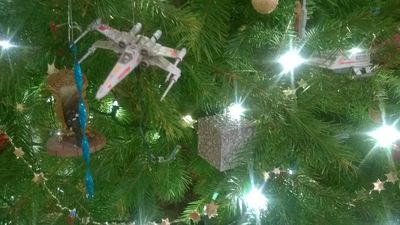 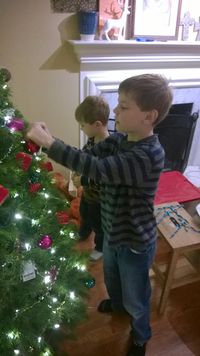 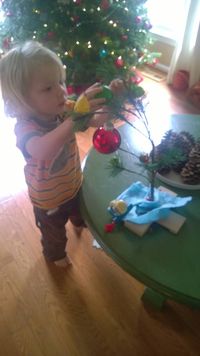 (So I guess I should also mention that I didn't even take the rest of these photos; I just swiped 'em off my dear husband's Facebook page.) 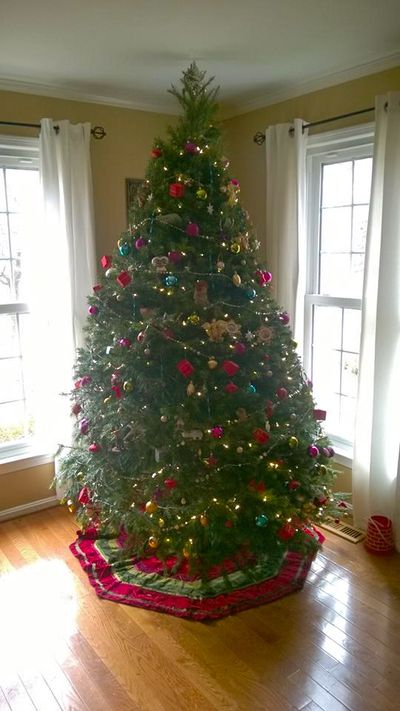 Ta-daaa! It's a tree with a bunch of crap on it. I will gaze upon it lovingly for about two weeks, at which point my love will turn into needle-and-sweeping-related rage, followed swiftly by ornament-removal tedium, and finally haul-to-the-curb-related misery.

So much awesomeness! I can't wait to do it next week.

Beautiful tree!!
I love Butler's Orchard, and don't think I realized you can cut your own tree there! Score for where we'll be heading this weekend on our tree hunt!

*I always get nerded-out-excited when you post something very local, and I remember that you are here, in the same area as me!

We got our first big Christmas tree this year, and our three-year-old is so charmed by it all.

I think we took at least 50 photos of him to get one good one for a Christmas card--and that's just one kid! What we'll do next year with two seems hard to tell.

Those mittens had no right to do what they did.

Thank you, I am laughing so hard I am crying.

i am especially appreciative of the snacks and (presumably) adult beverages involved with the decorating of the tree. clearly i am an amatuer who doesn't even consider anything of that nature. and fuck those mittens, maaaaaan. trying to crush the hands' spirit and all.

1) I am literally weeping with laughter right now. "FUCK THESE MITTENS" good god.
2) is that a Borg cube on your tree?! My husband just freaked out. THIS TREE WILL ASSIMILATE

SOOOO my family when the kids were young. Thanks for bringing back all of the nightmares! LOL!!

so now i'm at my work desk cleaning the coffee i just spit all over my keyboard. i shouldn't read your blog while drinking anything anymore. after reading your blog for years and years, you would i think i'd know better by now...

Memories....We still go out on the coldest night in December (unintentional) every year to choose a live tree, even though only our two youngest still live at home. The worrywart in me says please tell me that thing is secured to the wall in some way and not sitting in the stand waiting to jump on a boy or Max or Ceiba....

Enjoy! The memories are sweet!

The face hole pictures cracked me up! I am finally almost in the mood and the date is appropriate to decorate, but my husband has the flu and I'm not feeling great, I have a big deadline to meet, and Christmas is three weeks away? Oh boy.

My in-laws live near Butlers Orchard and know the Butlers and it always weirds me out when someone down county knows about them. They used to be a teeny local place. (I'm so glad they're doing well but still weird.)

I choked on my breakfast while reading this. I should know better than to read and eat.

Your commentary had me literally laughing out loud, so much that my husband came over to see what was causing all the commotion. Now we're tending to our business around the house whilst proclaiming "FUCK THESE MITTENS" every 15 minutes. Hahahaha.

Happy Holidays to you and your family!! :)

At least your city will pick up curbside. The city here will take your tree if you bring it to one of four city parks for drop off. Because who doesn't want to load a month old dried Xmas tree into their trunk and haul it a couple miles to the park? I'm always surprised there are still needles on any of the trees there.

At least your city will pick up curbside. The city here will take your tree if you bring it to one of four city parks for drop off. Because who doesn't want to load a month old dried Xmas tree into their trunk and haul it a couple miles to the park? I'm always surprised there are still needles on any of the trees there.

What a beautiful tree! I can't even imagine getting a real, growing tree. No tree farms in Florida.

Also, Ike with the Charlie Brown tree is so cute!

My dad always goes out and gets an absolutely jaw dropingly beautiful tree... and he always ALWAYS over estimates the height of our ceilings, drags the tree in anyway and then insists on snipping the top of the tree off instead of trimming it from the bottom which leaves us with less of a Christmas tree and more of a Christmas... shrub.

Gorgeous tree! My 2,5 year-old was taken to what we call a garden centre by my parents the other day. (it's basically a big store that sells everything remotely garden-related, but will go big on christmas decorations and trees). The very first christmas tree my toddler laid eyes on over there, was a very huge ROTATING one. And he now has decided, that a Christmas tree is not a real one if it doesn't spin. Oh boy... disappointment coming your way, buddy.

That is a beautiful tree, the snacks look delicious and I ended up wheeze-laugh-coughing at Ike taking against his mittens. Twice.