Hi! Hi hi hello and stuff. It's been a maddeningly busy couple weeks around here, work wise. And completely, utterly boring otherise. Ezra's tooth fell out. We took the Christmas tree down. I am still finding cat hair on my mascara wand.

Oh, and I took Ike to get his first "real" haircut. A hairzcut, if you will. Six months of half-assed home haircuts (plus the complete absence of any forgiving, curl-inducing humidity) had left him pretty shaggy looking, and it was officially time to take him to see someone who actually knows how to cut hair in a semi-straight line. 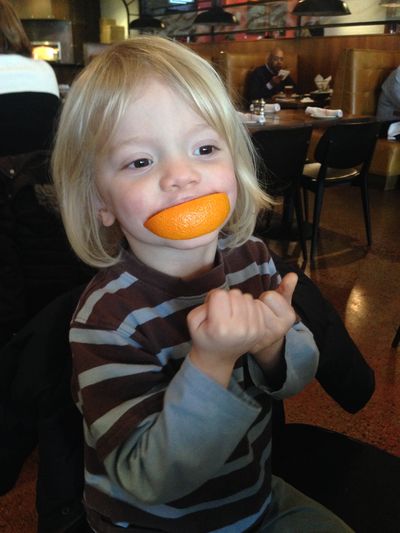 (The official "Before" portrait.)

Ike is pretty attached to his hair. I've asked him if he'd like short hair — really, I have! — and he's been adamant that he likes it long. He's told me that no, he doesn't want it cut like his brothers' hair, but then again, HE'S THREE AND A HALF, so I can think of at least a dozen things he said "no" to just this morning.

(Milk in a cup, milk not in a cup, a shirt with a zipper, a different shirt with no zipper, underwear, eggs, a non-dark-blue plate, non-green socks, shoes, carrying his own lunchbox, walking on the sidewalk, doing anything that would make our morning even slightly easier, etc.)

But man, he was NOT happy about this haircut business, even after I tried to assure him we weren't cutting off that much. This was a betrayal, and it was UPSETTING.

"MY HAIR!" he wailed, pretty much the entire time. "MY HAAAIIIIIRRRR!"

He calmed down eventually — thank goodness for kiddie hair salons and their ability to cut hair in under five minutes, even in the face of a wriggling, crying client. And once his hair was dry and professionally tousled, and he realized we hadn't completely cut away the source of his power. 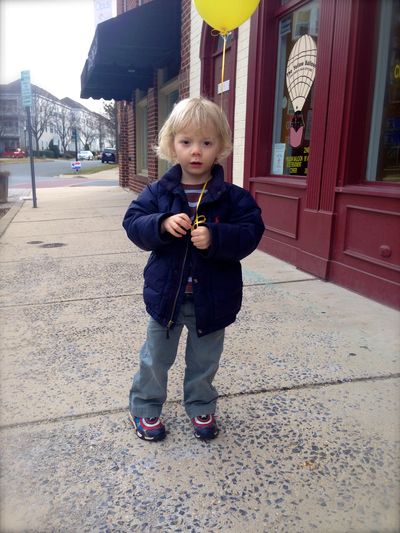 Later at home, I caught him quietly contemplating a bald baby doll. I asked him what he was thinking about. 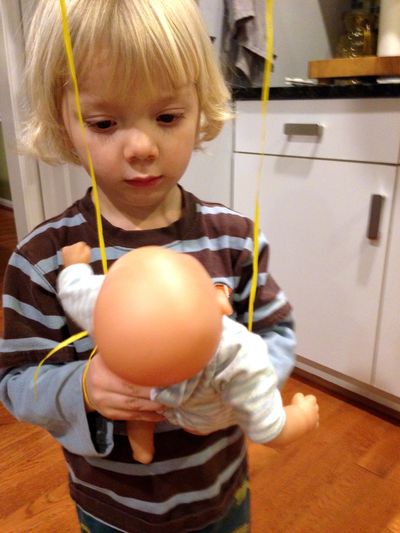 So there you have it. Diapers and haircuts: The official markers of the End of Babyhood.

Oh jeez. "I a kid now." My Carlos hates haircuts so much that we avoid it as much as possible...and I can't stand how grown up they make him look. But when Santa asked my daughter, "What's your sister's name?" it started to look like time.

*wiping away something that got in my eye*

I'm not sure how I am able to type this when I fell over dead from the cuteness of "I look regular"... so awesome! Love this post, sorry for the tears though, Ike.

No more Baby Ike. Me no like. Who told him he could grow up?!

The haaaaaaiiirz! Not really digging the Little Dutch Boy haircut, but at least he's still Ike!

The cuteness of all this just kills me dead.

Next surprise, over the next few weeks: it grows back!

Waahhhh! Stabbing the pregs lady in the hormones!!! We had some pretty awesome Ike-esq curls till about two weeks ago... Daddy insisted on a trim and I'm still a little sad!

oh! reminded me of my oldest nephew (who's 30 now!). He had the cutest curls when he was little. My sister took him for his first haircut around 3 and he when he saw the hair on the floor, he burst into tears and grabbed his hair, crying "My turls, (curls), my turls. You killed my turls!" just about slayed me!

So who is Delilah? The babydoll?

The Yellow Balloon! That's where we go for Lily. They give her a movie, and boom, done. Which is good, because anytime I come near that girl with a hairbrush she screams.

that's kind of heartbreaking...but looking back at photos of my daughter (15 days younger than Noah), yep. Thats when it all changed, she became a kid.

I didn't understand a word of this. It's like you typed it in a different language, one that does not involve a Baby Ike. I mean, I saw pictures of him upset and with less hair and I guess I know WHAT YOU DID but since I couldn't understand your words, I'll give you the benefit of the doubt that what I think happened didn't happen. *starts GoFundMe to Maintain Baby Ike's Babyness Forever and Ever Amen, Sans Haircuts*

What a precious little guy! And oh, the tears just kill me. *Sigh* Alas for that moment when they embrace 'kid-hood.'

Welp, that's it. You're just going to have to have another baby now.