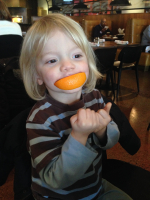 Hi! Hi hi hello and stuff. It's been a maddeningly busy couple weeks around here, work wise. And completely, utterly boring otherise. Ezra's tooth fell out. We took the Christmas tree down. I am still finding cat hair on my mascara wand. Oh, and I took Ike to get his first "real" haircut. A hairzcut, if you will. Six months of half-assed home haircuts (plus the complete absence of any forgiving, curl-inducing humidity) had left him pretty shaggy looking, and it was officially time to take him to see someone who actually knows how to cut hair in a semi-straight line. (The official "Before" portrait.) Aaaannnnd the "During." Ike is pretty attached to his hair. I've asked him if he'd like short hair — really, I have! — and he's been adamant that he likes it long. He's told me that no, he doesn't want it cut like his brothers' hair, but then again, HE'S THREE AND A HALF, so I can think of at least a dozen things he said "no" to just this morning. (Milk in a cup, milk not in a cup, a shirt with a zipper, a different shirt with no zipper, underwear, eggs, a non-dark-blue... Read more →

I am so angry about The LEGO Movie Oscar snub right now I can't even finish this sentence. Except that I guess I did. Oh. Okay. Moving on. *** Ezra has his very first loose tooth — a much-anticipated event, marred by the fact that it announced its looseness with a fairly large amount of blood. "MY TOOTH IS FALLING OUT!" he wailed from the top of the stairs last night, over and over again, in a panicked, screeching voice. (Ezra's personal attention-seeking flavor of Middle Child Syndrome is high-pitched Theatrical Wailing/Shrieking. About everything. All the time. It's great.) I went to investigate and aaaaahhhhhhhhhh Aaaaahhhhhhhhhhhh AAAAHHHHHHH there was blood all over his face and hands. NOTHING bleeds more profusely than a tiny, inconsequential wound to that child's face or mouth, by the way. When Ezra was a klutzy toddler he'd trip and faceplant on things, which would bash his gums or send his teeth into his inner lip, and by the time he stood back up it was already a scene from a horror movie. To this day most first aid efforts with Ezra typically involve 15 minutes of just trying to find where all the blood is even... Read more →

How To Get Lipstick Off of a Cat 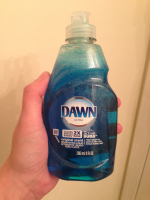 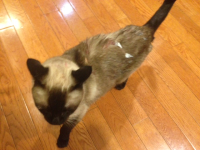 Ugh. What an awful week. Way to go, 2015. Way to go. I feel stupid even telling this story right now, but since I don't think there will be an Official Moment When It's Okay To Blog About The Time My Child Painted Our Cat With The Contents Of My Makeup Bag, let's just get throw this crap out there like a shiny, distracting set of jangly keys. So. Tuesday. It was a snow day around here, and a long-ass one at that. Jason and I were in the kitchen making dinner. We'd already blown through our Blue Apron meals for the week and had to fend for ourselves with the menu-planning, which predictably led to us choosing and committing to a delicious-looking chicken recipe while completely missing that it involved an HOUR and FORTY-FIVE MINUTES of active cooking time. The boys were all in the foyer, building a giant amusement park out of Duplo blocks. Because of course they were. Because the bin of Duplo blocks was only IN the foyer in the first place because I'd promised it to a friend with younger toddlers. Because my children hadn't even opened it in a good six months. They'll never... Read more →

Oh I Don't Know Amy Just Post Some Photos or Something 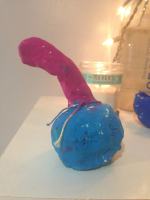 (AKA SHIT I FORGOT TO INSTAGRAM) (AKA IT'S ANOTHER SNOWWWWW DAYYYYY) Noah made this in art class. It's a bell. A holiday bell. I mean. What did YOU think it was? Come on now. OBVIOUSLY you grab the pink part and shake it, and then there's a smaller blue ball inside the big blue ball part that kinda...dings or something. You perv, you. *** This was me a couple weeks ago, rocking out with my fanny pack pain pump. I never left the house with it (other than to the doctor's office), and now that might be my single biggest regret of this whole surgery experience. Look at it! It's magnificent. So sassy. Perfect for cell phone, keys, etc. If I still had it I'd wear that shit everywhere. RIP fanny pack pain pump. *** I gave our trusty Ikea high chair away to a friend, and once Ezra noticed its absence, he immediately filled the void with Bloon and her booster seat . He sets out a different dinner for her every night. This tortilla-filled sandwich was her Christmas feast, and was admittedly a little heavy on the carbs. But hey! It's a holiday. Go nuts, girl. (In the... Read more →

We stayed home on New Year's Eve. Grilled up some steaks, made some baller sweet potatoes, sent the kids to bed at the usual hour, settled down on the couch to watch a movie, be exceedingly boring, etc. After blowing through enough wine and cocktails to bring down an elephant on a metal band's tour bus, we decided to switch to bubbly for the big countdown moment. Jason opted to amp the excitement up even further with a champagne-bottle sabering demonstration. It was very important to him that I record this moment. (Language NSFW. We talk like I write! HAPPY 2015 MOTHERFUCKERS!) Read more →