Home Archives About Subscribe Advice Smackdown Tip Jar
Ike & Delilah
You'd Think After a Week of Not Writing I'd Have Something to Talk About Besides Soap.

Whoa. What happened there? Days turned into weeks and now it's February and even my family members are texting me now like, "Uh. You alive? Everything cool?"

I was in Florida this week for work, a long series of 17-hour days and no free time and the best part is that I get to do it AGAIN next week, to a different part of Florida.

This week was Orlando. I brought the kids some free maps of Legoland and Harry Potter World from my hotel as souvenirs, because I am an amazing parent who never leaves room in her suitcase to bring them back anything good and/or wildly overpriced. 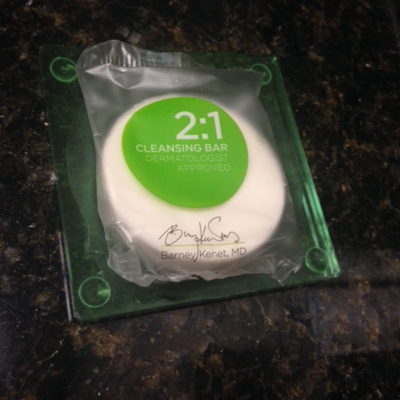 (Except for YAAASSSSSSSS more Hyatt soaps. Although this week the maid figured out my hoarding game and cut me off after two soaps. Dammit.)

Within an hour of arriving at my hotel, I watched a guy trying to flirt with the concierge, who apparently is attending college for healthcare management. He wished her luck in a tough field, then walked away, but stopped to bellow "BECAUSE OBAMACARE" at me and my slightly startled (and non-eavesdropping) coworkers.

"BECAUSE OBAMACARE" became one of many team refrains for the week and our go-to excuse for everything. (An email didn't go out? Someone overslept? Cab driver got lost? BECAUSE OBAMACARE.)

We also developed a game where everyone was assigned a potential stripper name from every restaurant menu and/or strip mall store line-up. No one else found it as amusing as we did, oddly enough, although it was surprisingly easy to play once you got going. Summer Tomato Salad. Aged Cheddar Biscuits. Grouper Cheeks. Tijuana Flats. Rocco's Tacos. Supercuts. 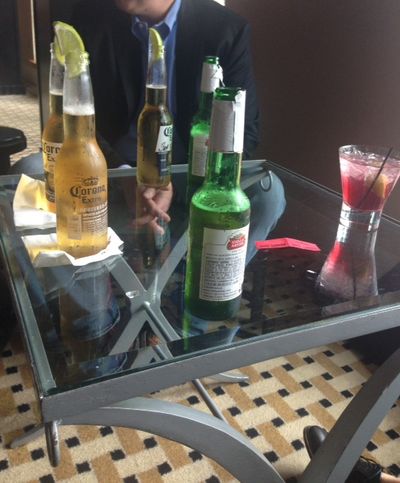 (This is what an official post-conference networking event for financial marketers looks like. It was fun. The drink tickets flowed like wine.)

And now I am home, and every child is sick or freshly recovering from a stomach bug. Noah came down with it late Wednesday night. Ike technically kicked things off last weekend before I left, recovered, and then either relapsed or caught a SECOND virus that manifested right as I arrived (frantically and directly from the airport, after my flight got delayed) to pick him up from school yesterday. His teacher was wearing latex gloves and handed me his clothing, triple-bagged.

Ezra was the last kid standing until about 6 p.m. last night, when I found him asleep on the couch.

"He'll be barfing within the hour," Jason predicted. 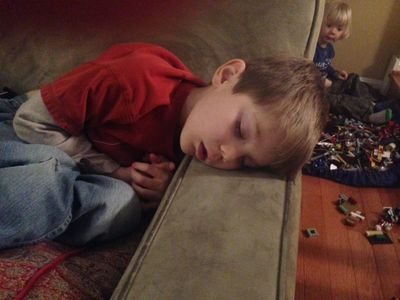 Everybody seems a little better this morning at least, while Jason and I wait out the incubation period in abject terror. He'll be on his own with the kids again all next week (he's amazing), and I'll be in Florida again from Monday through Thursday, so neither of us can afford to get sick. 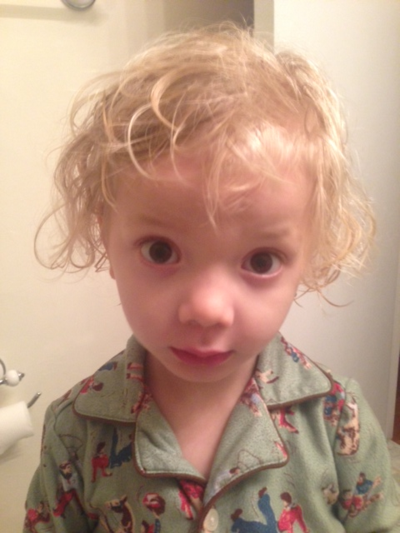 After his bath last night Ike asked me to not got away again. Ouch. 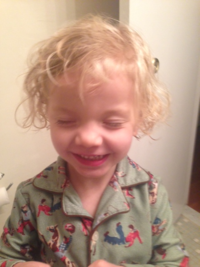 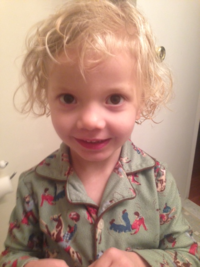 One more trip, one more week. I'm sure everything will magically settle down and I'll achieve perfect work/life balance right after that. Yes. Definitely.

Glad to have you back, but sad to see you go so soon.

Can you explain to me what the person on Ike's pajamas is doing? Breakdancing? Just hanging out in the grass?

Hey!! We missed you!! Glad to hear everything is ok. Florida conference sounds like it was a lot of fun and you have some great co-workers. WIN!! But yes, leaving those cute hairz must be hard. What is up with the barfing bug going around? We live in MD also and our school got hit hard. The posts on the school parent listserv were out of control with folks going on describing in great detail the projectile vomiting. Not that I don't want to hear about projectile vomiting (you, Amalah, tell it so well), but after a few posts, ok, we get it, there is a bug going around.

You are forgiven :) We just missed you!

Tricia, I believe the answer is "getting bucked off a horse."

Welcome back! And adios!

I second Ike! I did actually get kinda worried - but ridiculously relieved it was fun-ish vs. tragic. I am way too caught up in your life I think....maybe I should get my own......(nah)

Oh good, somebody who might appreciate this: While waiting to be called back for my mammogram this morning, a woman came over to her husband and said: "There's a $200 co-payment. BECAUSE of OBAMACARE. Which credit card should I put it on?"

She could have been there for any multitude of radiological/ultrasound procedures, but had she been there for a (screening) mammo she would have NOT had a co-payment BECAUSE of OBAMACARE, but I think she failed to appreciate that. Also - she needed to ask her husband which credit card?

Your little Ike looks like Harpo from the Marx brothers now with that haircut and curls. This is not a bad thing as I adore Harpo.

Ike's jammies are awesome! Especially because the only image that is really clear is of a cowboy falling on his rear. Those poor sick pumpkins, though :( Hope they feel better, and you and your husband are spared.

You're back! I miss when you're gone. I live in FL, and love Tijuana Flats. The restaurant, not the stripper. Though I can totally picture the stripper who would be named that. If you ever have to go to a conference in Jacksonville, FL, I'm happy to bring my little guy by so you can smell his head and get in some baby boy snuggles...Totally sucks having to leave them twice in a row.

That photo of Ezra asleep with Ike in the background with the legos is just too cute for words.

Also, we are so over winter illnesses. So over them. It is time to be done, done, done with them.

May wellness be upon you and your spouse next week!

Are you coming to Miami?

The last time I traveled for work my son was 11. I remember the torture every evening deciding when to call home to try to avoid complete tween meltdown - not before dinner as that's too hangry, not right after as that's prime homework focus time, but then not too late as sleepy is emotional and will cry desperately asking me to Just. Come. Home. Noooowwwww... glad I don't have to do that anymore.

Glad you're back! I get a little desperate when you're gone.... started digging through the archives.

I used to be a housekeeper at a fancy condo resort thing. If I'd suspected any of our guests liked our soap as much as you like the Hyatt stuff I would have "forgotten" a case of the stuff in their unit, not cut them off. That just seems needlessly stingy with stuff that doesn't even belong to them in the first place.

Glad you're back, sorry the boys are / have been sick, and we TOTALLY USED TO OWN THOSE PJs. Nick & Nora, right? SUPER soft. Loved them.

@Suzy Q Delray Beach next week, not Miami. Going to nickname a coworker or two as Suzy Q Supercuts tho.

Also @Ann...RIIIIGHT? All I want in the world is a case of Hyatt soap.

Yes - you should propose to do a sponsored post for Hyatt and they can pay you in soap!

Funny those figures looking part of that bottle.

Glad you're back! Sorry the kiddos are sick though. Enjoy Delray. If you get down time, Morikami Gardens is a wonderful place to relax.

I am honored! That person (or persons) must be forced to drink copious amounts of wine for my namesake.

Still, wish it was Miami, because maybe then I could do a drive-by hug-n-drink.

Thank you for communicating perfectly the chaos of working and kids, and oh god someone is sick and wait, we still have jobs and want to do well there too, and it's all kind of fun and crazy and wonderful anyway :)

Ugh. The GUILT. I feel you, Also feeling drinks, fun colleagues and gettin' shit done. That there's the good stuff.

No worries about intellectually feeding the masses. It's so nice to come home to family, and hard to be away. I think it's nice that you entertain us in your spare time. My husband and l are looking forward to Jason's upcoming guest post, as we might get ready to do the same. If you get a chance, l saw a really funny free Yoda valentine that made me think of all the awesome Yoda hat pictures over the years. http://www.designwashrinserepeat.com/2013/02/freebie-yoda-best-valentine.html
Thanks for posting!

If the part of Florida you are in this week is Amelia Island, you must contact me immediately so that I can take you out for a drink.

Are you back in Floriduh? I park my car at the garage at your hotel. So, you have a getaway car when you hijack the maid's cart and steal All The Soaps.

At least you get to skip out on MOAR snow by being in FL instead of your home. That would be awesome to me and we haven't even gotten NEARLY the level of snow that you have. :D

Hey, Amy--this has nothing whatever to do with your post, other than to let you know my daughter just received a pet beta fish for her 18th birthday and she and her friends collectively named it Ezra.
Oh yea, and we're both named Amy :).
Keep up the good work with your blog; one of my favorites by far