It's Snow Day four million and three. Conditions are deteriorating.

As is my ability to spell "deteriorating" correctly on the first second third try.

They have eaten all the waffles and are clamoring for more waffles. HOW CAN YOU EAT SO MANY WAFFLES?

No one wants to go outside and play in the snow, because fuck snow. They're all tired of snow, and would rather climb on Mom's head while she types and cause her to reflexively protect her coffee cup every 2.3 seconds because BODIES and LIMBS and FLAILING MUPPET ARMS.

My attempt at a Pinterest-y project of making ninja masks out of t-shirts managed to amuse them, but I can't stop thinking they look more like ISIS fighters than ninjas. This is...vaguely unnerving. 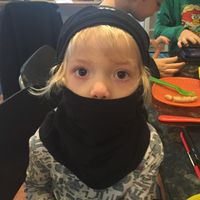 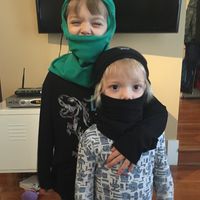 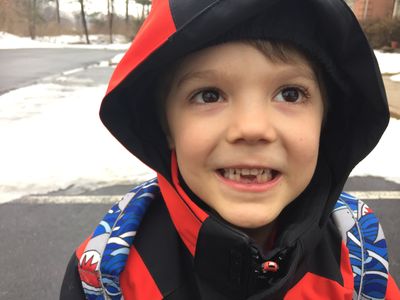 I forgot about the Tooth Fairy.

However, after I remembered this morning, it seemed as if Ezra had also forgotten, as he failed to voice any disappointment over his lack of monetary compensation. We took this opportunity to sneak into his room and belatedly swap his tooth for a dollar.

But when prompted about the Tooth Fairy, Ezra said that yes, she HAD come and left money under his pillow. A five-dollar bill, to be exact, which he'd already deposited in his piggy bank.

One of us is obviously going crazy. It's too early in the day to say who it is for sure.

It is cold. I cannot find my slippers or any matching socks. We are out of firewood.

I built a little campfire out of Legos, though. 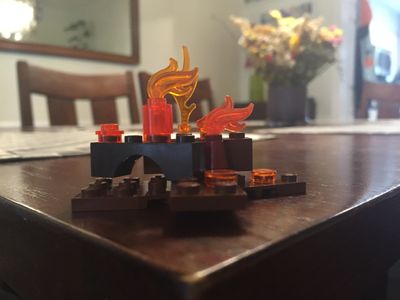 ALL of this is taking place at our home too. What is it about snow days that cause kids to eat like they may never see food again? Snow days are bankrupting me!

In this house, the tooth fairy follows the trick taught to her by Carmen Staicer, Momto the Screaming Masses, of putting the money in her bra. Then when she takes off her bra for bed, and finds the money there, she knows what to do.

Thank God for the internet or I would think I was the only parent who couldn't seem to remember to have the tooth fairy visit. Lucky for me, they are all too old for the tooth fairy now and the only teeth they are losing is their wisdom teeth when they get pulled. (Much more expensive than the tooth fairy.)

Am I the only one who sleeps with a bra? Our tooth fairy tends to be too busy too. Won't comment on the snow - I'm a Canadian with a normal winter and my 12 years old has never had a snow day since Kindergarden. Painting? All the play dough? Microwaved Ivory soap bars? Water beads? All of those together??

I live in Boston. I'm sending you big hugs because even though we're (mostly) through it, it was utterly hellacious. Do not underestimate the power of blanket forts. Oh, and obstacle courses that require your children to essentially run in circles around the house until they wear themselves out. What was the hardest was suppressing my own desire to hunker down in self-pity when my children needed me to get up and Be Fun. It will be spring someday, just get through today!

I read so many horror stories about parents with no cash (or only twenties) on the night that the tooth fairy was supposed to visit that I went out and got a roll of gold dollar coins to keep in my bedside table long before my son was of the loosing teeth age. I have never regretted that moment of clarity!

My son is also home for a snow day. And contentedly reading the second Harry Potter book (FTW)! I am "working" and drinking the second pot of coffee.

I am currently home with my kiddo because work is closed and daycare is closed and there is NO SNOW. NONE. To be fair it's supposed to start this afternoon, but....could we have done a half day? At least?

Maybe Noah played tooth fairy? How awesome would that be?

Laurie, a roll of gold coins is GENIUS.

Ceiba got a waffle taste?

Sort of laughing sort of goosebumping that Whit made a ninja mask out of a tee shirt yesterday and showed me and then said, with some trepidation, "But, Mum, I think I sort of look like I'm in ISIS. Which is ... less fun." Indeed, sir.

Our tooth fairy occasionally left notes under the pillow stating how she didn't have enough presents to give all the children and she would be back the next night. I thought a few times about having gold coins/presents/books, etc. to have around for those 'tooth fairy' moments, but, um, not that organized.

I live in France and here they have the tooth mouse. The obvious excuse when the mouse has forgotten to exchange money for teeth is that it was scared of the cat in the bedrooom. So it came during schooltime instead! This was perfectly acceptable for my son.