The Loss of Spock

Noah spotted the photo on my computer screen immediately. Of the dozen or so colorful Windows live tiles cheerfully flipping around with updates, he zeroed right in on that one in particular.

He spotted the headline a few seconds later, before I even had a chance to even finish my internal groan of “ohhhhh nooooo.”

There was no way or reason to sugarcoat it, so I explained that yes, the actor who played Spock had died earlier that day.

This month marks the four year anniversary of my dad’s death. It really doesn’t feel like that much time has passed, and yet when I do the math and realize that Noah was only five years old when he lost his Pop Pop, it feels like an eternity. He was a baby!

Noah remembers, and will talk very objectively and matter-of-fact about it, which is a nice way of way of saying that yeah, My Quirky Kid Is Quirky and doesn’t always phrase things in the most sensitive manner.

“Your dad died. It’s too bad you don’t have a dad anymore.”

“And if your MOM dies, you’ll be an orphan!”

(He’ll say that with a sense of awe and wonder. I am guessing the 3,457,049 children’s movies that use the kill-parents-off-so-the-orphan-can-have-a-great-adventure trope has something to do with this, rather than any real desire for his Nana to die so I can go fight dragons or discover that I’ve actually been the rightful Queen of Bucks County, PA all this time.)

But on Friday, I could tell. He got it this time. At nine years old, he gets it.

And he was devastated.

I tried to talk to him about it – the actor was very old, he’d lived a wonderful life and everybody loved him and missed him, we could still watch his shows and movies and remember him, etc.

Noah briefly veered back into the practical: How was this going to affect the new Star Trek movies, was the Young Spock okay, was Young Spock alive, I dunno, has anybody heard from Zachary Quinto lately and can confirm he’s cool?

And then he quietly went to his bedroom. I heard him digging around in his toy bins, talking to himself.

“Spock’s dead. Spock died. They can only make movies about the past now and can never go back to the present because the old Spock died but he was the first Spock and now we’ve lost our first and original Spock.”

I peeked in. He’d pulled out all his Star Trek ships and action figures and was quietly setting up a model of the Enterprise bridge. Soon his chatter switched to a perfectly memorized, beat-for-beat and word-for-word recitation of The Wrath of Khan. He knew every bit of dialogue and dramatic background music swell.

When the little neighbor girl showed up to play, Noah greeted her with: “Have you heard the absolutely terrible, awful news? SPOCK DIED TODAY.”

She didn’t know who Spock was, but patiently sat through a full hour of painstakingly detailed and exhaustive Star Trek background and education from Noah.

Later that evening, we watched the 2009 reboot.

(This had been Noah's first introduction to Trek, and from there he went straight to The Original Series, which remains his true love, as he is always partial to anything he can pinpoint as First and/or Original, before people start mucking around and "changing things," like the cast or the costumes or a barely perceptibly different paint job on the Enterprise.) 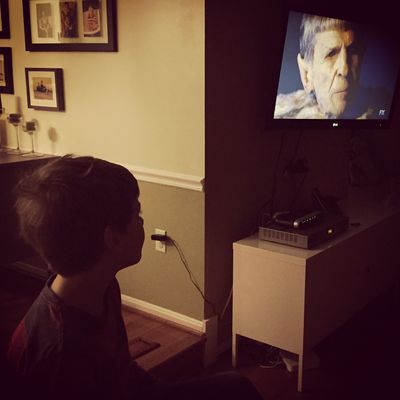 “Goodbye, Spock,” Noah whispered to the screen. "I'm going to really miss you." 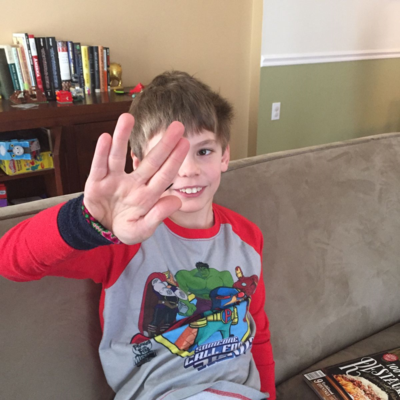 I think we all will, Noah.

Live long and prosper, you sweet and amazing boy.

Zachary Quinto was on Girls this week so do with that what you will....

I am at my desk crying, for Leonard Nimoy and for Noah, he is a truly amazing boy. Live long and prosper indeed.

Ooooooh what a sweet boy with an amazing heart. He phrased exactly how I've felt about this just perfectly.

When Ninjago killed off Zane last November (only to bring back robot Zane- gah!) my son cried. It was the first time he has identified with something like that which was close and personal and OUCH. He was eight then and he watched in horror and then let silent tears fall. Spock is worse because Spock was real and classy and wonderful. LLAP Noah!

That's one wonderful young man you have there. But on an unrelated note who picked this very moment to start chopping onions?

I'm just going to restate the obvious here. You have an amazing kid. That was a great tribute and shows just how awesome he is. LLAP!

I think Noah just paid Spock the most amazing tribute I have read thus far this week. What a great kid.

I think he may need a sweatshirt in Mr. Nimoy's honor.

So your kid is smarter than I am....This line "They can only make movies about the past now and can never go back to the present because the old Spock died but he was the first Spock and now we’ve lost our first and original Spock." I spent an embarrassing number of minutes staring at that line. Because movies that are yet to be made would be made...in the future? Yes this is how time works? Then it occurred to me - the reboots are intended to operate as prequels (I think - not a Star Wars fan really). Noah has properly contextualized the movies on a timeline. So the movies made, regardless of when, are about the past. (Cause you can do that with movies - dictate the time period in which they are set.) *headhitsdesk* Is it time to go home yet?

Amy, I just wanted to tell you that I love your children.

I was so saddened by the news of Leonard Nimoy's death, and Noah's words sum it up perfectly.

"Spock died but he was the first Spock and now we’ve lost our first and original Spock."

I struggled not to laugh at the part about you being the orphaned Queen of Bucks County. Hilarious.

I think that the whole family would enjoy a good dose of Saturday night watching "in search of" in memory of Spock.

As a Pennsylvania girl, I'd like to say that we'd gladly welcome your rule, Milady, if you bring your valiant knight and three sweet, adorable, awesome young Princes with you.

You officially win at blogging and parenting. This is so beautiful. Noah is such an amazing kid! :) Thank you for sharing with us.

All of that above, plus this, the obligatory "he is getting sooo big! comment. Because, dang,look at that big kid face Noah is sporting these days.

Didn't think I could love Noah any more until I read this...

My dad looked alot like Leonard Nimoy in his later years. Every time I would see LM in a movie or an interview, it would be like a part of my dad was still around, as weird as that may sound. My dad's been gone for seven and a half years. When I heard the news that Spock died, I felt like I lost my dad again. Even more weird, I know, but if anyone can make sense of grief and how it hits you upside the head at times, please to be letting me know, kthxbai.

Oh, Amy, I'm sobbing over here. I don't always remember how much things can mean to kids!

Noah is wonderful and this is the best tribute to Spock I've seen. Sniff.
(my husband agrees with Noah and the original being better / mucking with O.G. Star Trek lore).

That's one seriously awesome kid you've got there, but you know that. Poor guy.

I have wonderful memories of watching the first and original with my Dad. My son's first Christmas present bought for me with his own money was a Phaser. I am right there with Noah. It will never be the same again.

I managed not to cry when it happened (a real feat at 37 weeks pregnant) but that just made me tear up.

My own "quirky" (just got an educational diagnosis of ASD today) little guy is 5 and he too has a way of saying things that just get me right in the heart.

Thank heavens for the sweet, patient neighbor girls, eh? We have one too.

Aww, I have the sniffles now. That was perfect.

Maybe its just the fact that I am pregnant, but I definitely teared up at this. What a sweet boy. Also, if Noah is interested Zachary Quinto spoke to Time on Leonard Nimoy's passing and you can read it here http://time.com/3729463/zachary-quinto-leonard-nimoy/

Well thank you for the tears. I knew they were there someplace, waiting for the right time. Alas, days later and at the office no less.