Not A Baby Ike's Big Weekend

Ike had an exciting weekend, chock full of destruction and injury.

On Saturday, we went to a birthday party at a friend's house. Ike emerged from their basement playroom covered in bits of styrofoam. 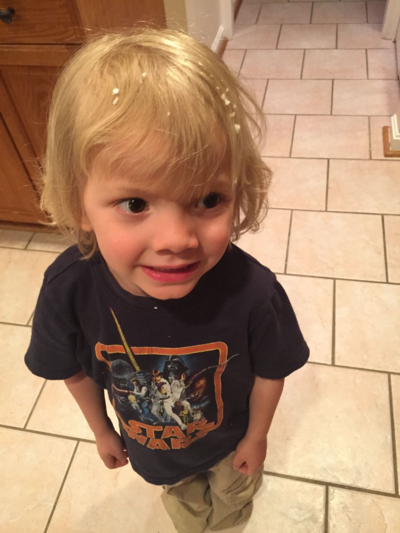 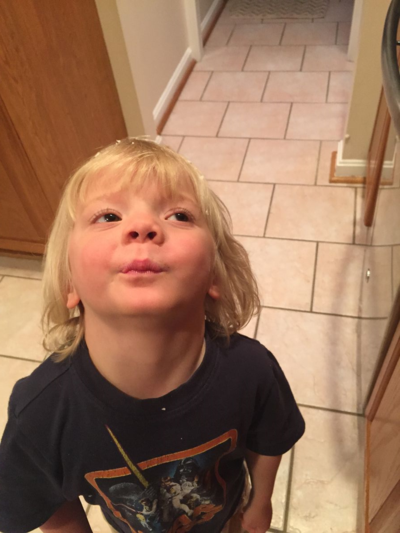 Second response was: OH RIGHT THAT. 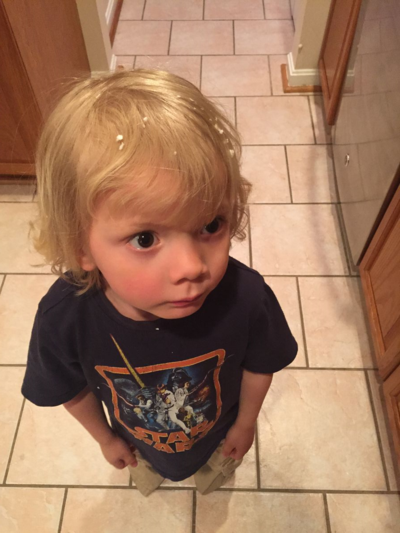 Third and final response was: LADY I'VE SEEN SOME THINGS.

Turns out it was the filling from a giant stuffed dog. The dog was being used for "fighting. Fighting all the kids." Then the birthday boy received a giant foam sword and ta-da! The party officially had a THEME! Fabulous.

On Sunday, the boys successfully lobbied for a trip to the LEGO Store with their grandparents, on the grounds that it's a fun store for people of all ages, including grandparents and also the money of grandparents.

I suggested Ike get a small Duplo set. He was like, shut up and buy me a Bionicle. Weapons or GTFO. 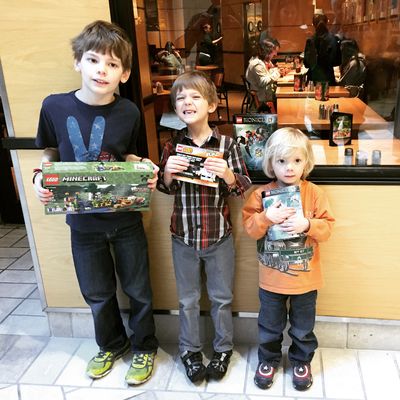 The Bionicle he chose is for 8 years old and above. We don't typically follow the age recommendations that closely but in this case, we probably should have. Ike got so preoccupied trying to piece this set together that he slipped and fell off his chair and smashed his cheek on the kitchen counter. 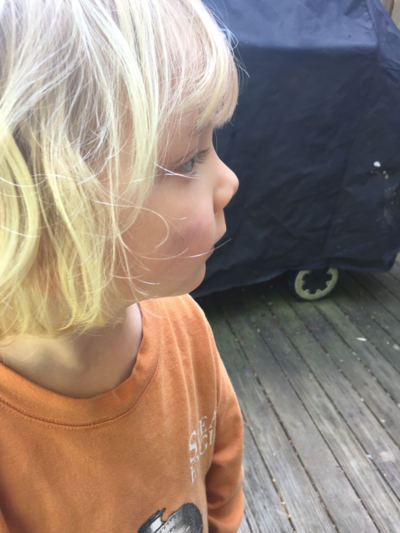 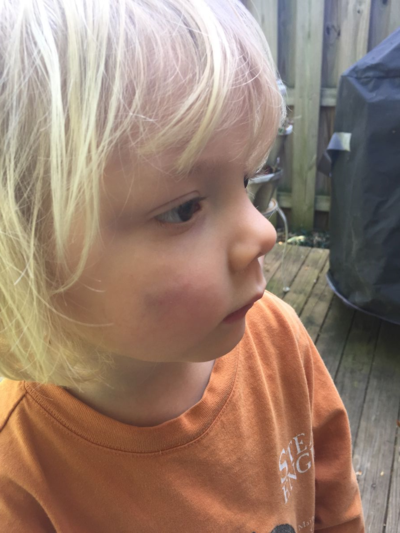 Probably should have stuck to fighting kids with giant stuffed animals and left the Lord of the Skull Spiders* alone.

*Actually a name of a thing. What kind of thing I do not know, but oh God don't ask them to try to explain it to me again for the seven hojillionth time. MY BRAIN REFUSES TO ABSORB AND RETAIN THIS INFORMATION.

Ike ended this weekend of excitement by suddenly growing five feet in length, like WTF did these legs come from guys: 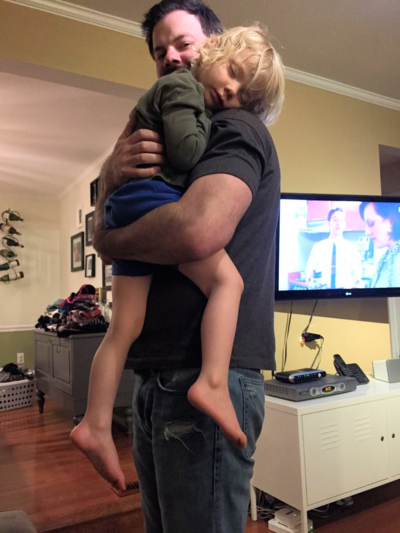 (PAY NO ATTENTION TO THE LAUNDRY PILES AND HAPHAZARD ELECTRONICS IN THE BACKGROUND. DON'T MAKE ME REMIND YOU ABOUT THE FUCKING TIRE OUT BACK.) 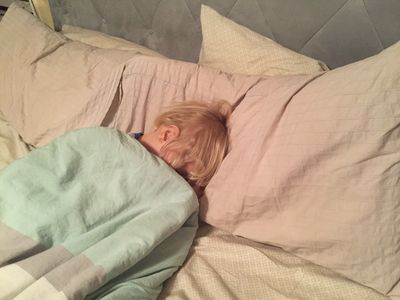 Five weeks 'til four years old. Suddenly really hoping they pass really slowly, but it'll probably be the opposite.

Sounds like an awesome weekend. Didn't notice the laundry or electronics, but when going back to look after you mentioned it, I did notice the wine rack... WINE! Helps! with! laundry! (Try it you won't be disappointed, well you might be disappointed (because wine doesn't actually complete the laundry), but it won't matter... pass the wine!) lol =)

I had to put my foot down on no lego before 4 years old. He's almost three and as much as I love to give him the stuff he loves, I am NOT putting that shit back together a million times a day tyvm.

Sweet boy. There is just nothing sweeter/lovelier/beautiful(ier?) than seeing a strong man holding a little child. *heart melts*

Love the wine bottles on the wall! I need me some of those!

"Weapons or GTFO." LOLOLOL. I have 3 girls, and oh, the looks of disappointment he gives me when I try to buy boy birthday gifts.

Yay for warm weather! But stupid shorts turned my almost-four-year-old into a big kid, too. Awww. Such a cool kid.

Why do they have to grow up? Snif, snif. Mad Men 👍

4 is kind of blowing my mind.

Baby. Ike. (I hope his future girlfriends call him that. I am not imagining him snuggly with girlfriends because ew but still. Still.)

"LADY I'VE SEEN SOME THINGS" is the perfect caption for that photo. I can't stop laughing.

Seeing Baby Ike's picture reminded me of some old photos from the Star Wars set. Doesn't he look like Mark Hammill's son?

Right? Mine's turning four in June and suddenly he's this long LITTLE BOY, not a toddler anymore. He keeps asking me to pick him up and I do because I know my days of being able to do it grow ever shorter.

The LEGS. Who let this happen? Certainly not me.