Home Archives About Subscribe Advice Smackdown Tip Jar
Me vs. Nature, Part Four Million and Three
First Day of the Rest of the Summer

If you ask Ike how old he is now, he will first say he is five, because he wants to go to kindergarten. 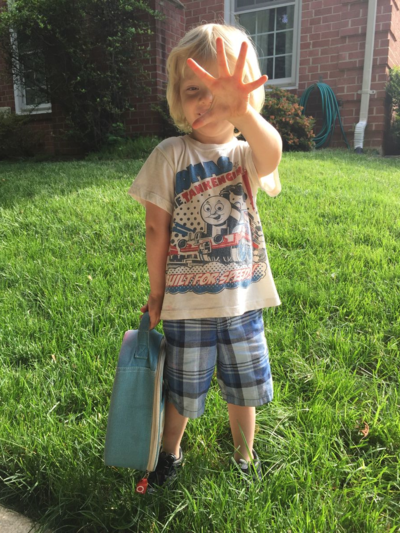 Then he will say that he is zero, because he is still a baby.

Neither of these answers are correct. He is four years old now, officially.

I ran into a seemingly never-ending barrage of technical issues yesterday while trying to complete and upload his birthday video. I could have posted it late last night to get it up on his official birthday date, but. You know. There were chocolate cupcakes to eat and and a Lego Bionicle set to build.

(Recommended age range on Bionicles, FYI: 8-14. He needs a little help from Noah to get started and then takes over and builds them perfectly himself, usually just from looking at the picture on the box. He might be shaky on the whole counting thing but fingers crossed we can get him into a decent state school on a Lego scholarship.)

He is four. He is not a baby or even a toddler anymore. He is loving and goofy and rough and tumble and cuddly and sweet and stubborn as hell. He adores his brothers more than anything and they adore him right back. Ezra says they are Best Buddies, and most nights I find them curled up together in the top bunk. Noah still has his "KEEP OUT IKE" sign on his door, but never seems to enforce it, especially now that Ike can hold his own in a big Bionicle battle. He plays out front with the Big Kids now, climbing our tree, riding his bike, helping Ezra build and guard his collection of decorative rocks that I am going to have to return to someone's garden one of these days, just as soon as I figure out where they are swiping them from.

And in the small window of time in the morning when it's just him and me, after everyone else has gotten their hugannakissannahighfive from Ike, but before it's time to leave for preschool...he still crawls up on my lap and asks to be held and cuddled like a baby. And then requests a silly little made-up lullaby about Baby Ike that I've been singing to him for as long as I can remember.

"I'm big but I'm still little," he explains, as if I wasn't already happy to oblige.

Oh so sweet...cannot believe he is four. You make beautiful children :)

Your birthday videos are the best.

I, like everyone else, cannot believe he is four. Just cannot! What a sweetie.

congrats on making some amazing kids!

I haven't even watched the video yet, and I'm all verklempt.

My 87 year old mom still sings me the little song she made up for me as a baby.

"...he still crawls up on my lap and asks to be held and cuddled like a baby."

I would STILL do this every morning if there were somebody there to hold me.

Wait? How did this happen? You JUST gave birth to him recently, I swear!!!
Happy Birthday Ike!!

Oh, okay, happy birthday Ike. You can't be four. Even if you are.

He looks SO MUCH like you in that still shot on the video! So cute! "I'm big but I'm still little". Melt my heart!

Happy birthday, baby Ike! My baby just graduated high school, so I'm soooo enjoying watching yours grow. Thank you for sharing your beautiful family--oh to have mine be four again just for a moment!

I know because you live it and you're amazed at him being four that our amazement doesn't begin to be as amazed. And yet, I remain amazed. Happy birthday, baby Ike. (The video still with him smirking is the most I've seen you in any of them. Congratulations for looking like you're his mom.)

Omigosh, he's such a cutie and does look JUST like you!! One of these days would you mind posting a tutorial on how you make these videos? You know maybe within the next 6 weeks before my baby turns 1? Love watching your boys grow up!

Every child, every birthday, I see the video, I know I will cry if I watch it, and yet I still do. At work. Every time. They are the sweetest thing ever.

A video-making tutorial is a great idea! My grandson will be two soon and I would love to do that.
Your boys are just lovely, all of them.

Youngest kids are special. My youngest is 5, and still "Baby Zoe" to me. Every single morning for as long as she could walk, when she wakes up and wanders into the kitchen, I still pick her up and give her the biggest hug I can. And UGH she'll be in kinder in the fall.

I'm 11 weeks pregnant with my first, and the birthday videos always tear me up, but today I watched this one and BAWLED because OHMIGOSH THEY GROW UP?!
I'd better go read the Week 11 entry on your Pregnancy Calendar now to go cheer me up. Sniffle sniffle.